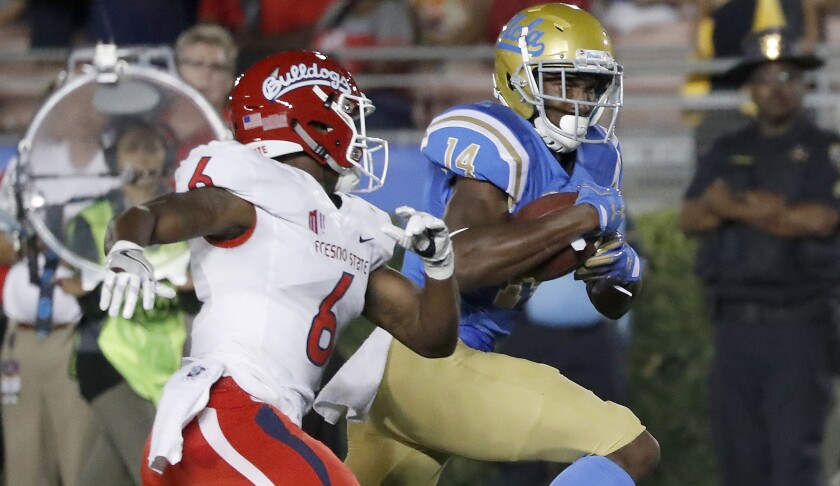 UCLA coach Chip Kelly on Theo Howard’s transfer: ‘I would do the same thing’

It was one of those difficult conversations that ended up being not so hard.

UCLA senior receiver Theo Howard told his coach that he was leaving and his coach said OK.

“If I was Theo,” Chip Kelly said Sunday, “I would do the same thing.”

Howard announced Thursday that he would enter the transfer portal after appearing in only one game this season because of injuries to his hands. Kelly said Howard wouldn’t be able to play the rest of the season, putting his status at UCLA for 2020 in limbo because he’s graduating in December.

“Grad school’s not guaranteed here, so he’s got to look and see if there are opportunities out there for him,” Kelly said. “ … What if he doesn’t get into grad school here? So then now what does he do? So he’s doing what he should be doing.”

Howard’s departure will deprive the Bruins of one of their most reliable receivers. He did not drop one pass last season and finished with 677 receiving yards and four touchdowns.

Howard entered training camp with a wrap around an injured wrist that sidelined him for the first two games. He returned against Oklahoma last month but hurt his other hand against the Sooners and has not played since.

“We love and hope for the best for him,” receiver Chase Cota said. “And if he goes, that happens, if he stays, that’s good, but I think we have a good group of guys and we’re excited moving forward either way. … Obviously, we’d love to still have him.”

Kelly has mostly pinned his team’s struggles during a second consecutive 1-5 start on a lack of execution and consistency while saying the coaching staff needed to do a better job. But what could Kelly do better individually as the person ultimately responsible for the program?

“That’s the same exact thing,” Kelly said. “Our ability to understand what our players do well and what they can execute well and do we accentuate that and if there is a weakness that you’ve determined is a weakness, then how do we improve that weakness, because you certainly can’t be one-dimensional in anything that you do.

How would Kelly assess the job he’s done in implementing those sorts of things?

Kelly said he was unsure who would start at quarterback against Stanford on Thursday after Dorian Thompson-Robinson was a full participant in practice Saturday for the first time since suffering a leg injury against Arizona late last month.

A player isn’t assured of getting his starting job back once he returns from injury, Kelly said, meaning that Austin Burton could make a second consecutive start depending on how things go in practice.

“You can’t paint yourself into a corner with any situation,” Kelly said. “ … There’s nothing guaranteed. You’ve just got to go out and compete and it’s got to happen on a weekly basis.”

UCLA needs to be better than only one team this week, Kelly noted.

“It’s just, can your defense be good enough to beat Stanford,” Kelly said, “and that’s what the goal in the operation is.”

Kelly said defensive lineman Martin Andrus Jr. (torn knee ligament) and guard Michael Alves (back) would miss the rest of the season. Safety Quentin Lake (broken hand) is out against Stanford, but defensive lineman Elijah Gates (undisclosed injury) is considered day to day. … Linebacker Krys Barnes, defensive back Mo Osling III and receiver Delon Hurt worked off to the side of the practice field with a trainer Sunday, signifying that they were recovering from injuries. … Kelly said there was a chance that linebacker Tyree Thompson, who has not played this season after undergoing foot surgery, could return this year. … The air quality on the practice fields improved significantly from Saturday, when it had a smoky smell and was considered unhealthy for sensitive individuals.