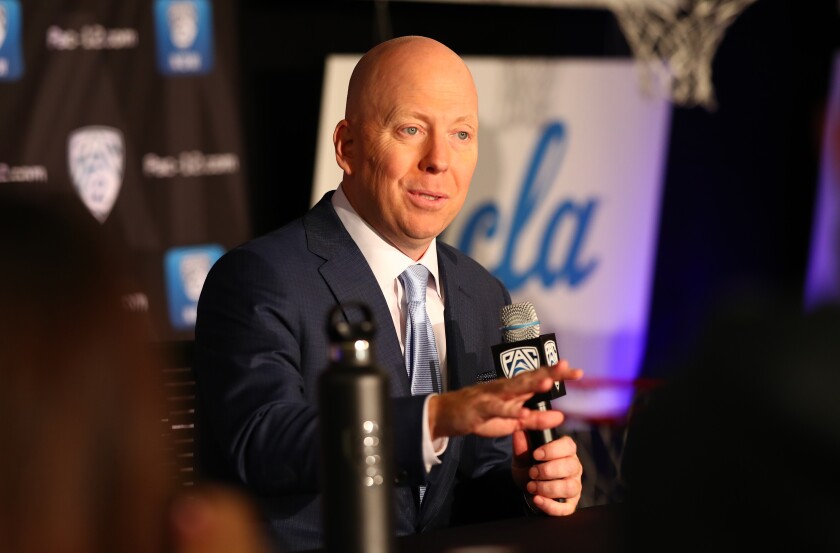 Mick Cronin arrived at UCLA with a blue collar. He just needed the suits, ties and shirts to match.

So like he does before every game, the Bruins’ gritty new basketball coach devised an exhaustive game plan. He met with a haberdasher to assess his current look.

Fifty thousand dollars later, the former Bearcats coach had a fresh wardrobe and one less worry on the eve of his first season with the Bruins. His ensemble included 17 dress shirts, 15 ties, seven suits, four sports coats and pants in addition to all the pocket squares, belts and dress shoes needed to accent each look.

Cronin won’t receive the full collection until later this week but unveiled one of the outfits, including a dark blue suit with a subtle checkered pattern and matching light blue tie, this month in San Francisco at Pac-12 Conference media day.

“I better like them,” Cronin cracked, “for what they cost.”

Cronin was squeamish about divulging the five-figure outlay given that it’s more than some people make in a year, but it’s a necessary evil among college coaches who switch schools and color schemes. Cronin needed lots of blue and gold when he headed west last spring after 13 seasons at Cincinnati.

Remember those “Welcome to L.A. Coach Mick Cronin” billboards that sprung up around Southern California? They showed the coach in a blue tie, which was interesting considering he didn’t own one. UCLA officials altered those images to make sure they were consistent with the school’s colors.

Then there was the matter of figuring out what Cronin would wear to his introductory news conference inside Pauley Pavilion. Fortunately, Josh Rebholz, UCLA’s senior associate athletic director for external relations, came prepared as he accompanied Cronin from Cincinnati to Los Angeles.

“On the plane, he threw me two ties,” Cronin said of Rebholz. “I was like, ‘Thank goodness.’ ”

Cronin picked a dark blue tie and paired it with a navy suit he had accidentally purchased during his final season at Cincinnati, thinking the sample swatch of fabric was black. Wearing anything blue around the Bearcats was considered taboo because it was the color of crosstown rival Xavier, so Cronin slipped it on when few would notice during a road game against Nevada Las Vegas.

“It must have been an omen,” Cronin said of buying the suit, “because it was not planned.”

Cronin can thank a UCLA predecessor for his new look. Longtime friend Ben Howland, now the coach at Mississippi State after 10 seasons and three Final Fours with the Bruins, connected Cronin with Mihr, whose company also outfits Rams coach Sean McVay as well as running back Todd Gurley and wide receiver Robert Woods.

Mihr was thrilled that Cronin’s taste in clothing veered wildly from Howland’s.

“He likes his stuff really full to the point where it’s hard for me to style it,” Mihr said of Howland, “because I’m not used to making something so large.”

Cronin attended a fitting at Mihr’s Costa Mesa office this summer before speaking at a booster event in Orange County. Cronin’s new threads spared him from having to wear that same navy blue suit or his one blue sports coat to any dressy event.

All Cronin needs to do before heading out now is consult the wardrobe book that Mihr provided. Every suit is numbered, one through seven, along with a description of the year-round, durable Loro Piana Italian fabrics and what shirt and tie might pair with each one.

“It’s kind of like Garanimals for adults,” Mihr quipped.

Mihr found that Cronin shared his tastes, favoring modern patterns such as subtle plaids, beaded stripes and bird’s eye, a design that resembles a woven basket. The coach also understood the importance of fit.

“A lot of coaches want super baggy and they want to be almost sloppy on the court because that’s how they’re comfortable,” Mihr said, “but having something that fits you properly, you have better range of motion and it just looks a hell of a lot better.”

Among Mihr’s favorite items that he picked out for Cronin are a textured navy tie that can pair with almost everything. There’s plenty of blue and gold in the ties but nothing reminiscent of a preppy look from the 1990s.

“It’s not in your typical collegiate bold stripe going diagonally,” Mihr said. “It’s more sophisticated with tighter patterns or if it is a stripe, it’s a finer stripe.”

Not all of Cronin’s new outfits are meant for work. Some shirts came with a hidden button-down collar that he can pair with dressy jeans and sneakers for dinner at a swanky restaurant.

It’s also the sort of look that might impress Bruins guard Jules Bernard, a clothes fiend whose mother, Kristene, is a freelance makeup artist who works on television shows such as “Shark Tank.”