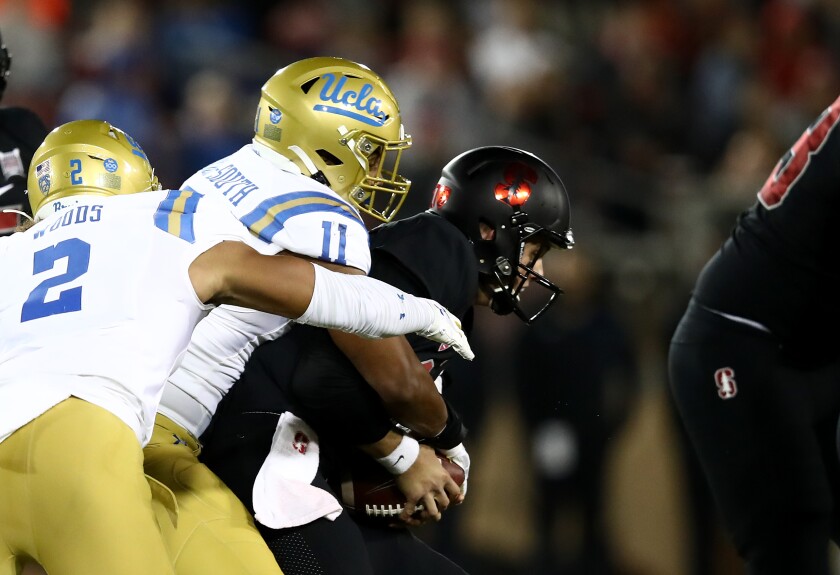 It had become quite the annoying habit, UCLA’s defense turning opposing quarterbacks into stars on a weekly basis.

Washington State’s Anthony Gordon threw for a school-record nine touchdowns against the Bruins.

The quarterback bushwhack ended Thursday night at Stanford Stadium during UCLA’s historic 34-16 victory over the Cardinal.

Stanford’s Jack West resembled a third-string quarterback making his first collegiate start because that’s exactly what he was.

UCLA’s defensive capitalized during its best showing of the season, holding West to 143 yards and no touchdowns while ending its 11-game losing streak in its series with the Cardinal.

West’s night was encapsulated by a short pass late in the third quarter that he bounced toward a wide-open Cameron Scarlett for an incompletion.

West completed just 15 of 32 passes and was often indecisive, holding the ball too long and allowing defenders to congregate around him. It also didn’t help that the Cardinal were starting three true freshmen on their offensive line. UCLA registered five of its season-high seven sacks in the first half, a stunning showing for a team that had made only nine sacks in its first six games this season.

West spent almost the entire game in comeback mode after UCLA scored on its first drive, wiping out an early three-point deficit.

Some of West’s best work came on his first drive. He twice connected with receiver Conor Wedington for completions, including a swing pass that went for 30 yards. The Cardinal ended the drive with a 42-yard field goal that gave them their only lead of the game.

West watched much of the rest of the first half face down. UCLA’s Josh Woods, Krys Barnes, Osa Odighizuwa, Leni Toailoa, Keisean Lucier-South and Odua Isibor all were involved in sacks in the first half, when the Bruins held the Cardinal to 86 yards of offense (including only 11 on the ground).

West was in the game because Stanford starter K.J. Costello (thumb) and backup Davis Mills (calf) were out with injuries.

UCLA’s special teams had stayed out of the news in recent weeks, a positive development for a unit that has mostly struggled since coach Chip Kelly’s arrival.

That changed Thursday, in ironic fashion.

Just as an announcer on the ESPN broadcast was praising Kelly’s special teams for being well-coached, UCLA’s Wade Lees had a punt blocked by Stanford’s Spencer Jorgensen. The Cardinal’s Brycen Tremayne chased down the bouncing ball and fell on it in the end zone, giving his team a touchdown that brought a smile to Stanford coach David Shaw on the sideline.

It was the first punt that Lees, a graduate transfer from Maryland, has had blocked at UCLA.

Barnes, who was injured earlier this month against Oregon State, was in the starting lineup. Safety Quentin Lake, defensive back Mo Osling III, defensive lineman Elijah Wade and running back Martell Irby did not play because of injuries. … Receiver Josiah Norwood took departed counterpart Theo Howard’s No. 14. … UCLA brought its full marching band to the game.