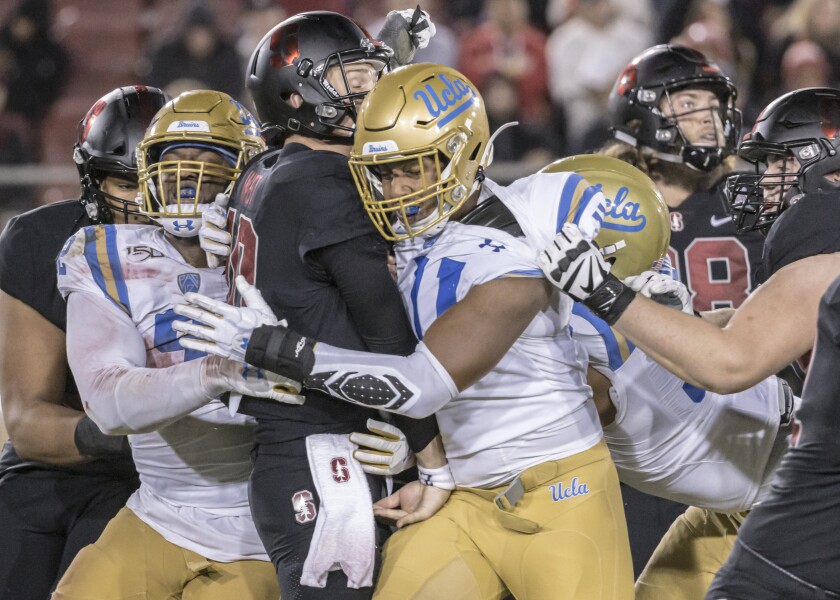 They are who they thought they were.

That was the takeaway among UCLA’s defensive linemen after they finally executed a game plan to their liking, in the season’s seventh game.

So why weren’t they able to execute that sort of game plan previously?

“That’s a great question,” UCLA defensive lineman Odua Isibor said. “The difference was that we were actually who we want to be the last game. We know what we’re capable of; the problem is us performing what we’re capable of. So I think last week we kind of tapped into our true potential.”

It certainly helped that West was a third-stringer making his first college start and had to scramble behind an offensive line starting three freshmen. The Cardinal’s offense generated a field goal on its first drive … and then nothing until a fourth-quarter touchdown against the Bruins’ second-stringers.

Isibor and linebacker Krys Barnes got the sack attack started on Stanford’s second drive when they pummeled West for a seven-yard loss on third down. Soon other teammates joined in on the fun.

“A guy makes a play early in the game and the other starters are like, ‘I need a piece too,’ ” said defensive lineman Osa Odighizuwa, whose one sack didn’t fully capture his disruptiveness. “Then you start rolling.”

By the end of UCLA’s 34-16 victory, eight Bruins had contributed to sacks. Odighizuwa called it probably the most fun he’s had all season, allowing him to drift off to sleep on the plane ride home with a satisfied smile.

UCLA (2-5 overall, 2-2 Pac-12 Conference) will try to keep the festivities going Saturday at the Rose Bowl against Arizona State (5-2, 2-2), which has had its own protection problems. The Sun Devils have allowed 2.7 sacks per game, third-most in the Pac-12, and are coming off a 21-3 loss to Utah in which freshman quarterback Jayden Daniels completed only four of 18 passes for 25 yards.

Arizona State lost two projected starters on its offensive line before the season, replacing them with freshmen who struggled so mightily against the Utes that they were briefly benched. One of those freshmen, left tackle LaDarius Henderson, won’t turn 18 until December.

Daniels is a considerably better runner than West but may suffer from similar protection issues. The more parallels the Bruins can generate from the way they play against the Sun Devils and the Cardinal, the better.

“It’s just solidified what we know we’re capable of doing,” Isibor said of the Stanford breakthrough.

Quarterback Dorian Thompson-Robinson said his career-high 66 rushing yards against Stanford were partly a function of more read-option plays that give the Bruins another running threat besides Joshua Kelley and Demetric Felton Jr.

“When you don’t have me as an option,” Thompson-Robinson said, “you can just kind of zero in on Josh or Felt or whoever is in at running back, so yeah, it definitely gives another advantage to us going into the game. Now the defense has to worry about me.”

Thompson-Robinson said he did not feel limited by the sprained ankle and knee that had sidelined him for the end of his team’s loss to Arizona on Sept. 28 and the entirety of its loss to Oregon State on Oct. 5.

“The trainers took care of me, they got me healthy,” Thompson-Robinson said. “They wanted me to wear a brace just to have extra support [against Stanford], but I didn’t think I really needed it.”

Odighizuwa, defensive lineman Tyler Manoa and running back Cole Kinder spent several minutes consoling a teammate who appeared to be experiencing some personal difficulties that triggered a loud, profanity-laced tirade on the practice field while Thompson-Robinson spoke with reporters. The player calmed down considerably before walking off the field. Thompson-Robinson said Odighizuwa habitually helped his teammates persevere through struggles. “When things go bad or things go sideways,” Thompson-Robinson said, “everybody kind of looks toward him. ”… UCLA’s game against Colorado on Nov. 2 at the Rose Bowl will start at 6 p.m. on Pac-12 Networks.