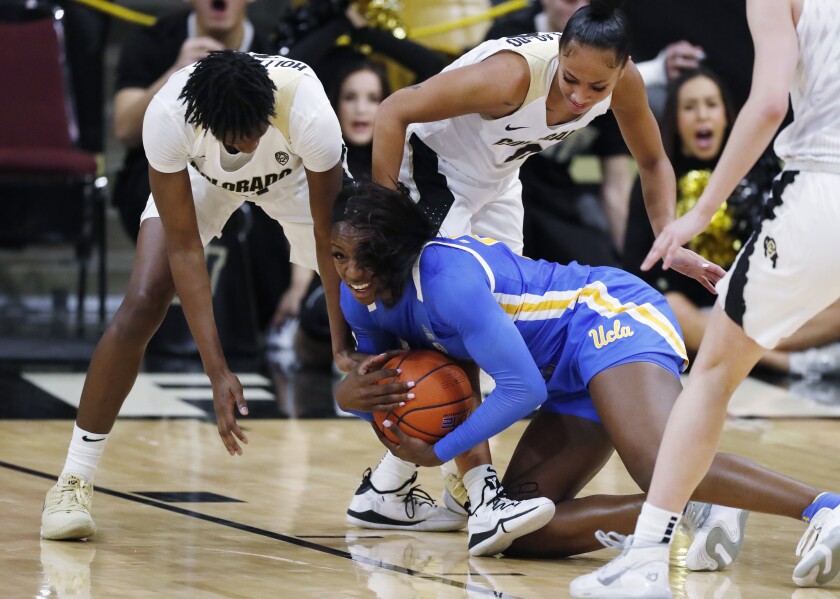 “It’s really nice to come back here — except for the altitude,” Onyenwere said after leading No. 8 UCLA to a 65-62 squeaker over Colorado on Sunday.

The Aurora, Colo., native is no longer accustomed to the thin air, but the junior forward was fired up to overcome her burning lungs on her way to 19 points and eight rebounds.

“Means a lot to have a good game and see how far I’ve come is really humbling,” said Onyenwere, who scored 15 points in the first half.

The Bruins looked as if they were going to cruise past Colorado (13-3, 2-3) when they scored the first 19 points of the third quarter to stretch their lead to 54-29.

But the Buffaloes scored the final 11 points of the third, and then chipped away until Peanut Tuitele’s layup with 1:05 remaining pulled Colorado to 64-62.

After UCLA called a timeout, the Bruins missed three subsequent shots but grabbed offensive rebounds twice, and then the ball went off Buffaloes guard Quinessa Caylao-do with 19.4 seconds remaining. It appeared she was fouled on the play but no infraction was called, and the Bruins maintained possession.

Japreece Dean hit one of two free throws with 13 seconds left to make it 65-62, and Colorado got the rebound on the miss and called time out with 10.3 seconds remaining.

Jaylyn Sherrod’s contested three-point attempt just before the buzzer was off the mark.

“No panic, we’ve been in those situations,” said Dean, who had 13 points for UCLA, same as Charisma Osborne. “Our defense was not very great at the end. We didn’t stop the bleeding and they kept scoring.”