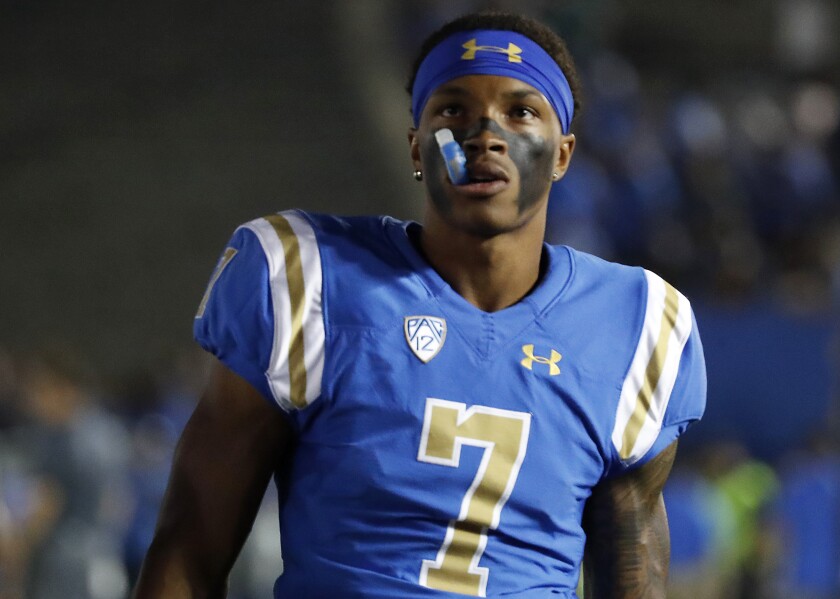 After a virtual team meeting Thursday night, 30 UCLA football players united in support behind a document they believe will protect them in their upcoming return to campus amid the COVID-19 pandemic.

The document, reviewed by the Los Angeles Times late Thursday, asserts that players do not trust UCLA to act in their best interest, particularly in regard to their health, a realm where it says the school has “perpetually failed us,” citing “neglected and mismanaged injury cases.” The document does not provide examples.

The players demanded that a “third-party health official” be on hand for all football activities to see that protocols for COVID-19 prevention are being followed; that anonymous whistleblower protections are provided for athletes and staff to report violations; and that each player can make a decision about whether to come back to Westwood without fear of losing his scholarship or other retaliation.

“These demands reflect our call for an environment in which we do not feel pressured to return to competition, and if we choose not to return, that our decision will be respected,” the document reads. “If our demands are not met, we will refrain from booster events, recruiting events and all football-related promotional activities.

“The decision to return to training amidst a global pandemic has put us, the student-athletes, on the frontlines of a battle that we as a nation have not yet been able to win. We feel that as some of the first members of the community to attempt a return to normalcy, we must have assurances that allow us to make informed decisions and be protected regardless of our decision.”

For the Bruins, the clock is ticking. Many players are expected to report to voluntary workouts on Monday.

Contacted Friday morning by The Times, UCLA athletic officials expressed understanding of the players’ hesitation to return to campus as the pandemic continues. Matt Elliott, UCLA’s senior associate athletic director for internal operations, said a department task force dedicated to return-to-training issues has been meeting daily for the last three to four weeks to prepare the best safety protocols, led by the resources and top minds from the UCLA Health System.

Elliott said that UCLA had not guaranteed athletes’ scholarships would be protected if they choose not to return because scholarships currently cover them until Oct. 1 and the immediate priority was to safely return them to campus. He said that the school would guarantee fall sport athletes’ aid through the coming season but could not say beyond that.

“We will evaluate subsequent terms to see where we are in the pandemic and what the health recommendations are for winter and spring,” Elliott said.

As for the other two demands, Elliott said UCLA is “incredibly fortunate to have a campus with a world-class medical center” and that the guidance given to team doctors and sports medicine staff comes from that network of voices.

Elliott said players were informed in meetings Wednesday and Thursday that the school would create an online portal that would allow them to report anonymously to the school’s faculty athletic representative, Dr. Michael Teitell.

That assurance was not enough to keep 30 players from Chip Kelly’s program — a list that includes starting quarterback Dorian Thompson-Robinson — from convening a video conference Thursday night to complete their document. For hours, they debated about what they would collectively use as leverage to achieve their goals.

On Friday, Thompson-Robinson sent out a tweet defending Kelly, adding, “Don’t turn this into a feeding frenzy on Coach, this is about the safety of the program as a whole.” He elaborated in another tweet, writing: “Would also like to state that Coach Kelly agrees with ALL of the demands on this letter and is working to get them in place. As the player whose face is on the cover of the article, I apologize to coach as I was unaware the letter would be given to the media for them to mislead.”

Also Friday, players, coaches and university officials were scheduled to participate in a virtual meeting to discuss the players’ concerns. Players who do not report for voluntary workouts will not be in danger of losing their scholarships, according to one person with knowledge of the athletic department’s plans who spoke on condition of anonymity because he was not authorized to discuss the issue publicly.

Some players on Thursday expressed willingness to boycott practices and games in order to make a bigger point. But that went too far for most in the group, according to two UCLA players who signed the document but asked The Times for anonymity because of fear of retribution.

Some UCLA athletes can return to campus starting Monday

Some UCLA athletes can return to campus starting Monday

Players on the UCLA football team and other sports teams who live locally can return to campus, but will not be penalized if they choose to stay away.

The players followed the path of the University of Texas football players who threatened to not host recruits and meet with donors to pressure the school to remove building names and campus monuments with a history tied to racism. The Texas players also demanded the school change its fight song from “The Eyes of Texas,” which has racist origins.

UCLA players kept their eye on Texas for another reason Thursday. The Longhorns have reported 13 COVID-19 cases thus far in their return to campus.

“We put our lives at risk every single time we put on that helmet,” said one UCLA player.

“Now, with this, what people don’t understand is, they say there’s a .1% chance of somebody dying, but last time I checked, that .1% has to be somebody. We’re going to come to a point where a college player will literally have to die from COVID-19 for someone to understand what’s going on. I hope it doesn’t have to reach that point.”

UCLA has had more than three months to solidify plans for football’s return. The players who spoke to The Times said they were not notified of next Monday’s return date until Tuesday, around the time the news went public. Some players felt out of the loop, but the athletic department did not receive clearance from L.A. County and the university until Monday afternoon.

While the NCAA has announced it would allow UCLA and other teams with Aug. 29 season openers to begin mandatory workouts July 6, UCLA has not called its players to return by that date because it has not received clearance from the county to start the second phase of training by then.

In late May, former UCLA defensive lineman Elijah Wade, who medically retired from football this year as a sophomore, got a resolution passed as a representative of the Undergraduate Student Assn. Council that first brought COVID-19 safety issues within the Bruins program to light and aimed to alert the university that protections were needed.

Wade said nothing official has been changed due to the resolution to this point. He and some current UCLA athletes met with a staff member from Gov. Gavin Newsom’s office last week to air their concerns.

UCLA football players and coaches take part in a video calling for change following the death of George Floyd.

Seeing that players were given less than a week’s notice about the start of voluntary workouts, Wade helped to facilitate more discussion among the Bruins. Some players felt they still had no idea what the consequences would be if they decided they weren’t comfortable playing during the pandemic, according to those who spoke to The Times.

Players thought it was telling that UCLA chose one football player to represent them on a stakeholder committee that met weekly with the return-to-training task force, rather than consulting with the team about who that player should be. Elliott said athletes from all sports were invited to a town hall in early June and told they could volunteer for the committee. The school settled on four athletes, one of which was a football player.

The players said that on Wednesday and Thursday, coaches set up meetings with players and their parents, encouraging them to ask questions. It is unclear how many of the players’ demands the coaches heard, but there was one change: The players asked to not have roommates so they could more easily keep social distance — and the coaches agreed to that request.

The team got back together later without coaches and hammered out the final details of their document. They decided they would back up their stance with their names, not knowing what Friday and the weekend would bring after Kelly and company read their statement.

“Time and time again, we see individuals within [UCLA] Athletic programs who ought to defend and protect us leave us in the dark to fend for ourselves,” the document says, again not citing examples. “Starting with neglected and mismanaged injury cases, to a now mismanaged COVID-19 pandemic, our voices have been continuously muffled, and we will no longer stand for such blatant injustices.”

One UCLA player said the current mistrust within the program was due to a lack of communication and the age and experience gap between coaches and players. “We have people that grew up in a different community in America during a different time in America,” the player said. “There’s no common ground, no meeting ground to where these two people can sit down and attempt to understand each other.”

A UCLA spokesman said, “There aren’t sides on this. It’s not our side versus their side. We’re all working toward the same goal, and we want them to feel comfortable and confident in the plan that we’ve put into place.”

The players who spoke to The Times said they do not feel nervous about being identified in the document because they “are all in this together.”