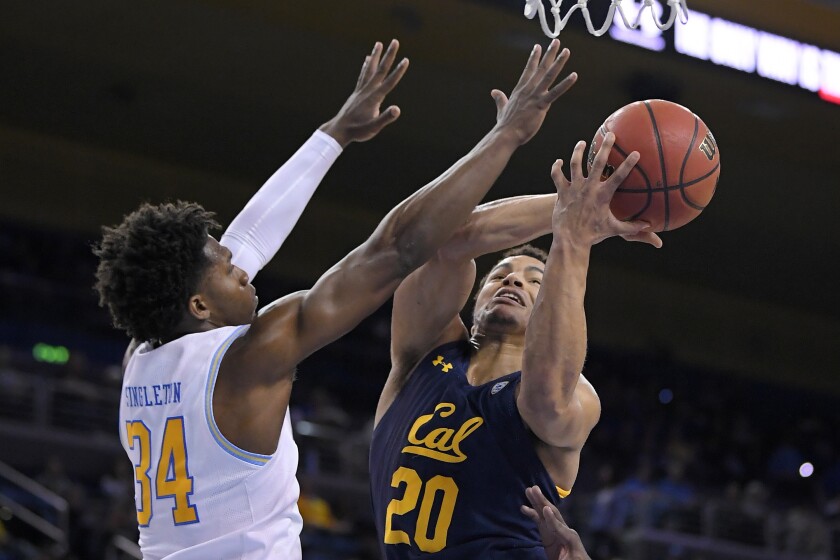 UCLA gets some defensive stops and beats California

It didn’t seem like a given that it would happen again this season considering the Bruins couldn’t seem to stop anybody during repeated second-half letdowns, but that wasn’t a problem Sunday against California.

UCLA held the Golden Bears scoreless for more than 11 minutes on the way to a 50-40 victory in Pauley Pavilion that allowed their Bruins fans to not only exhale but do some infrequent celebrating.

Cal missed 15 consecutive shots during its dry spell while being outscored 14-0. It was part of a stretch in which the Golden Bears made only seven of 25 shots in the second half, including two of nine three-point tries.

It was the fewest points UCLA had given up since holding Pepperdine to 39 in November 2011.

Guard Chris Smith scored 17 points and forward Jalen Hill scored all 11 of his points in the first half for UCLA (9-9, 2-3 Pac-12 Conference), which ended a losing streak at three games and won at home for the first time since Dec. 8 against Denver.

The Bruins won without senior guard Prince Ali, who rolled an ankle in practice Friday.

Points were an especially valuable commodity during a first half in which both teams seemingly competed to see which could come up with the most empty possessions.

Cal made only two of its first 12 shots and didn’t reach double figures in scoring until there were 7 minutes 45 seconds before halftime, but the Bruins weren’t much better on offense outside of Hill’s early onslaught. UCLA committed nine turnovers in the first half and shot 45% to Cal’s 32.3%.

UCLA was ahead 22-21 at halftime after Cal closed the half on a 10-4 run that included a D.J. Thorpe putback while surrounded by four Bruins.