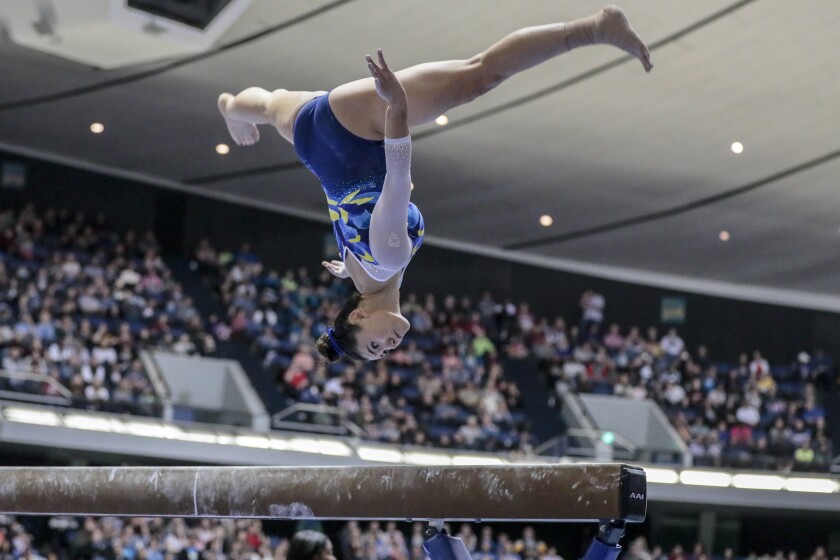 Chris Waller had been waiting for this long before he was appointed in May as coach of the UCLA women’s gymnastics team.

So the longtime assistant didn’t let some shaky beam routines and low early-season scores dim his bright smile after his first official meet at the helm of the program he worked with for the last 17 years.

The short-handed and No. 4-ranked Bruins, who held back some of their top competitors because of lingering injury, started Waller’s tenure with 196.575 points, their lowest score since the 2018 season opener, as they finished second Saturday in the Collegiate Challenge in the Anaheim Convention Center.

“I can’t say enough about how proud I am of what the team did today in terms of their approach to the competition,” Waller said. “Sure we made some mistakes, but the bottom line is this program has been led by a legacy for 29 years. It’s the first outing without [Valorie Kondos Field], and they just came in confident.”

UCLA’s streak of consecutive rotations with 49 points or higher (out of a perfect 50) ended at 124 with 48.5 on beam, the team’s second event of the competition. It was the team’s lowest score in the event since 2017 and ended what was the second-longest streak of 49 or more in NCAA history.

The Bruins started with 49.425 on bars but stumbled on one of its recent strengths. UCLA, which was ranked first on balance beam last year, suffered falls on each of its first two routines on the event, forcing the Bruins to count Felicia Hano’s 9.175 toward the final team tally.

The revamped lineup got a shakeup without senior Madison Kocian, a second-team All-American on beam last year, and sophomore Norah Flatley, who competed on beam in every meet last season. Kocian (shoulder) and Flatley (hip) were limited in competition because of injuries.

Despite falls from Glenn and Hano, Sakti, a sophomore transfer from William & Mary with a career high of 9.875 on beam, starred in her UCLA debut with 9.95. She shocked Waller when she made eye contact with her teammates during her routine, shedding the quiet persona she had when she showed up on campus. When Sakti stuck her dismount, she jumped in the air with excitement and rushed to give her teammates high-fives.

“It was so fun and amazing, and I’m so glad to have made this change with this amazing family that I have,” Sakti said. “I just believed in my coaches and my teammates and the trust that we have … that’s what helped me believe in myself.”

Ross followed with a matching score to salvage the rotation.

“I feel like our energy never let down, and that’s what helped, especially when we got into that tricky situation on beam with the first two people falling,” Ross said. “Our beam lineup is so new, and to see people perform after the falls at the beginning, it was really cool to see that comeback.”

The senior edged out Oklahoma’s Maggie Nichols, the two-time defending NCAA all-around champion, for the all-around title, winning with 39.725 to Nichols’ 39.625.