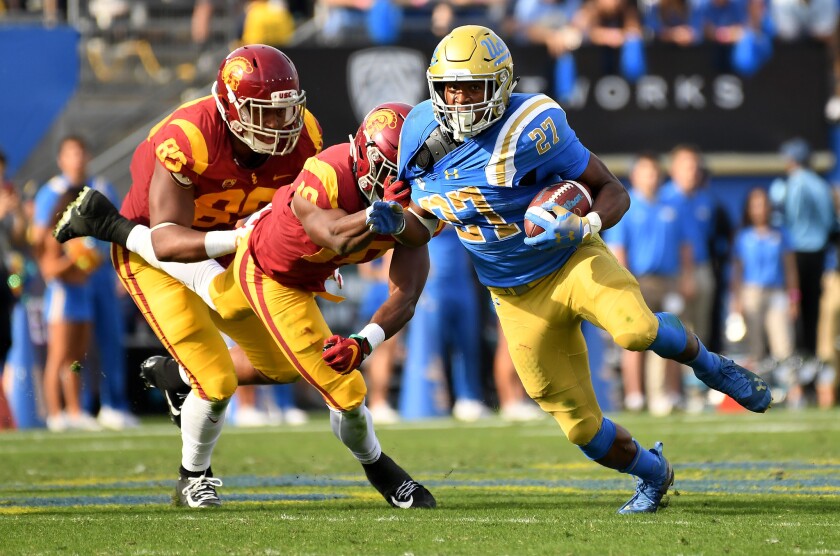 One didn’t have to close their eyes to imagine UCLA was playing a football game in September, not November, given its turn-back-the-clock sloppiness against No. 7 Utah on Saturday night.

These Bruins looked exactly like the ones who had made the least of their opportunities on the way to a 1-5 start, surging early in games, fading late and ultimately falling short.

Fortunately for them, a retro theme might be exactly what they need this week in the rivalry game at the Coliseum.

The last time UCLA played USC, the Bruins prevailed in what still might be considered the signature win of the Chip Kelly era. Joshua Kelley covered more ground than USC’s Traveler might in an afternoon at the Coliseum, his 289 yards rushing a record in the series. The Bruins scored the game’s final 13 points. The Victory Bell returned to Westwood after UCLA’s 34-27 triumph.

That was the Bruins’ final victory of a three-win 2018 and part of a three-game skid to close the season for the Trojans, keeping them out of a bowl game and increasing the heat on coach Clay Helton to molten levels.

Beating UCLA (4-6 overall, 4-3 Pac-12 Conference) on Saturday afternoon in his team’s final home game may not save Helton’s job, but it could keep USC (7-4, 6-2) alive in the Pac-12 South race should Utah stumble against Colorado or Arizona.

A victory for the Bruins would sustain their bowl hopes heading into the regular-season finale against California at the Rose Bowl while giving them their first moment to remember at the Coliseum since 2013, when then-coach Jim Mora screamed, “We own this town!” following his team’s second consecutive win in the series.

There is also the matter of regaining the late-season momentum that UCLA had generated with a three-game winning streak before everything fell apart against the Utes during a 49-3 walloping. The lopsided nature of the defeat against one of the nation’s top teams sustained one trend for the Bruins — their success has come only against middling teams. UCLA’s victories have come against teams that are combined 18-22 and its losses have come against teams that are a combined 44-16.

The Bruins moved the ball early against Utah, with Dorian Thompson-Robinson taking off on some successful quarterback runs and unfurling option pitches that Kelley grabbed for sizable chunks of yardage. But five turnovers and a continual inability to convert in the red zone were further red flags that something remains amiss against top competition.

“We control how we play,” Kelly said. “It’s not the football gods or anything like that. We didn’t play well against a really good football team.”

The defense was especially troublesome, players getting juked and failing to make tackles while giving up 536 yards and touchdowns covering 83, 69, 38 and 27 yards.

“I take ownership,” linebacker Krys Barnes, who was pump-faked out of the play on quarterback Tyler Huntley’s two-yard touchdown run in the first quarter, wrote on Twitter. “Gotta get right.”

Kelly’s live-in-the-moment mantras didn’t seem to take hold for a team that had suddenly become a contender in the Pac-12 South. Thompson-Robinson and linebacker Lokeni Toailoa acknowledged that players had been looking ahead instead of focusing on the Bruins’ bid for their first victory over a top-10 team since 2010.

The results were predictably disastrous.

In a throwback to his early-season missteps, Thompson-Robinson continually ran backward under pressure, threw one ball up for grabs in the end zone and committed four of the team’s season-high five turnovers.

It could have been easy for Utah to be the team that looked ahead given it remains in the running for a College Football Playoff berth, but the Utes were singularly focused on the Bruins thanks in part to something the Bruins said.

UCLA receiver Ethan Fernea had provided bulletin-board fodder leading up to the game by saying the Bruins wanted to show they were the tougher team. Whoops.

“We watched it on video before we came over to the stadium,” Utah running back Zack Moss said after scoring two touchdowns and piling up 200 all-purpose yards. “That was something we wanted to come out and prove, and I think we did that.”

Said end Bradlee Anae, after making two sacks: “The comment was in my ear the whole game.”

Fernea, by the way, started but did not make a catch.

There wasn’t much to smile about after the Bruins were held without a touchdown for the first time since their 50-0 loss to USC in 2011, but the always-positive Kelley managed a few when he sat behind a table facing reporters. He was reminded about his record day against the Trojans, the opportunity to beat the Utes having dissipated into the chilly November night.

“We gotta shift our focus back to them because it’s going to be a fantastic game,” Kelley said of USC. “We just gotta make sure we work hard and do the little things right this week.”

That would be unlike anything the Bruins did against Utah.