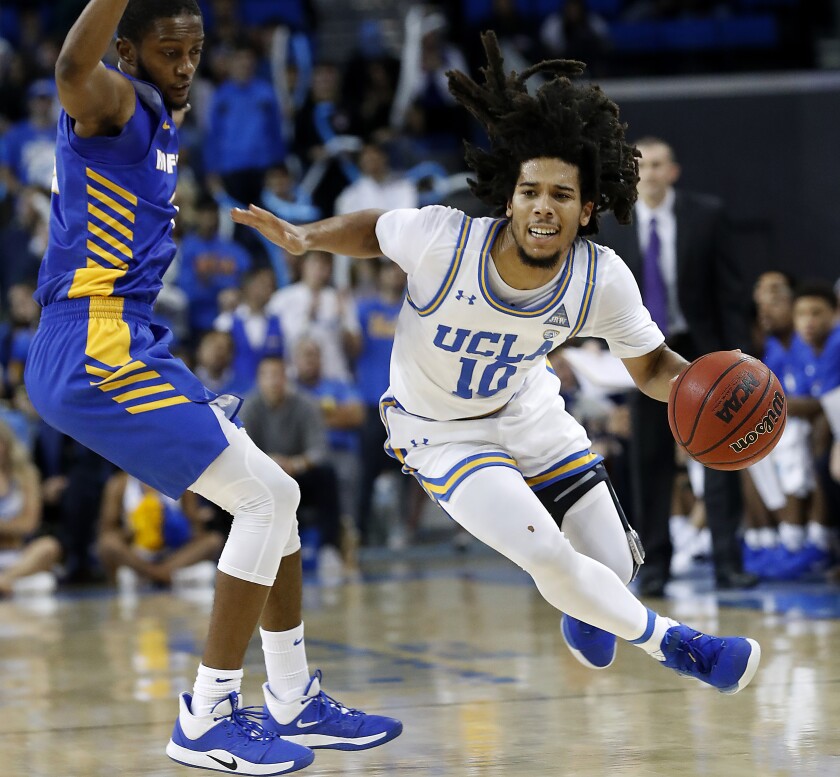 Tyger Campbell went flying to the floor underneath the basket and the race was on to see who could help him up first.

All four of the UCLA freshman point guard’s teammates sprinted over to help him up after he had made a crossover move that he completed by driving into the paint and banking in a layup while getting fouled.

The Bruins were there for Campbell after he had been there for them Sunday afternoon at Pauley Pavilion, willing UCLA to a 73-57 victory over Utah that extended his team’s recent surge.

An up-and-down first college season took a dramatic turn for the better as Campbell finished with a career-high 22 points and eight rebounds to go with only one turnover, a display of precision that helped the Bruins (12-10 overall, 5-4 Pac-12 Conference) notch their second consecutive victory and first weekend sweep in conference play.

It wasn’t as easy as the final score indicated.

The Utes (12-9, 3-6) trailed 50-46 after Alfonso Plummer buried an open three-pointer from the corner, but the Bruins rallied thanks to their floppy-haired point guard. Campbell followed a spin move with a floater, found Jules Bernard for a corner three-pointer and then drove into the lane and drew a blocking foul.

Campbell’s final points came on corner three-pointer before he was taken out in the final minute, allowing fans to shower him with applause.

Freshman guard Jaime Jaquez added 18 points for UCLA, which has won four of its last five games thanks in large part to increasingly stout defense. The Bruins held Utah to 38.3% shooting, an impressive display that came with Rancho Cucamonga Etiwanda High senior guard Jaylen Clark, one of the team’s most coveted recruits, watching from the stands.

Utah rallied after making five of its first seven three-pointers in the second half and benefiting from foul trouble on Chris Smith, UCLA’s leading scorer. Smith picked up his fourth foul with 11:41 left while fighting for a rebound and had to come out of the game. He finished with a quiet six points in only 18 minutes.

Riley Battin finished with 14 points for the Utes, who were without sophomore guard Both Gach, their third-leading scorer who was sidelined a second consecutive game by a knee injury.

UCLA built a 32-21 halftime lead after holding Utah scoreless for five minutes during one stretch while later enduring a 5½-minute scoreless drought of its own that included four turnovers and seven consecutive missed shots.

But the Bruins’ defense was so good, stretching hands into passing lanes for steals and limiting easy shots by constantly double-teaming in the post, that fans delivered an unexpected ovation late in the first half. It came after the Utes missed their 11th three-pointer in 12 attempts and the ball rolled out of bounds, giving possession to UCLA.

There were just 22 seconds left and it appeared as if the Bruins would get the last shot and a chance to build upon their 13-point lead. But Campbell pushed off for an offensive foul with eight seconds remaining and Utah’s Rylan Jones drove past multiple defenders for a layup at the halftime buzzer.

It might have been the only mistake Campbell made all afternoon.