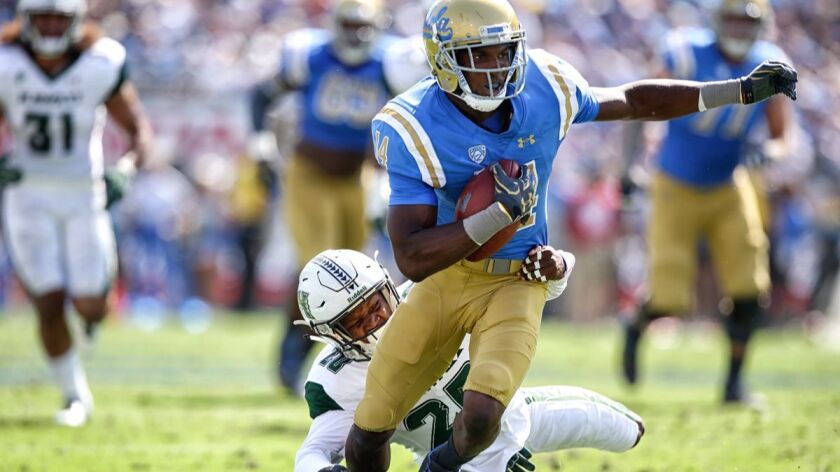 UCLA senior wide receiver Theo Howard announced Thursday that he would enter the transfer portal, allowing him to play his final college season elsewhere after fully recovering from the hand injuries that have limited him to one game in 2019.

The loss of Howard is another blow to coach Chip Kelly in his rebuilding efforts, depriving the Bruins of one of their top pass catchers. More than 30 players have left the team since Kelly was hired in November 2017, but none had transferred in recent months before Howard announced his intentions on social media.

“After careful consideration and discussion with my family, and the UCLA coaching staff, regarding my limited participation this season,” Howard wrote in a tweet, “I have requested a redshirt and to be entered into the transfer portal to allow myself to openly explore the best opportunities to utilize my remaining eligibility and pursue higher education.”

Howard led UCLA’s wide receivers with 677 yards and four touchdowns last season but entered training camp with a wrist injury and played in only one game this season, against Oklahoma. Kelly recently said Howard had been sidelined the last three games with an injury to his other hand.

Howard did not make a catch against the Sooners, ending a streak of having caught at least one pass in 28 consecutive games. He had become one of the Bruins’ most reliable receivers before his injuries, not dropping one pass last season.

Howard finishes his UCLA career with 119 catches, tying for 16th place on the school’s all-time list, and was an honorable mention All-Pac-12 Conference selection last season by conference coaches.

Howard’s teammates expressed their support on social media, wishing him luck at his next stop.

Former UCLA defensive lineman Marcus Moore is also in the transfer portal after having taken classes toward his degree to allow him to leave as a graduate transfer. … Bruins quarterback Dorian Thompson-Robinson, who was sidelined against Oregon State on Saturday because of a leg injury, fully participated in practice Thursday with a wrap over his left knee. Safety Quentin Lake, who has been sidelined since the Oklahoma game last month, also participated with a wrap over his injured hand. … Linebacker Krys Barnes, defensive lineman Elijah Wade, running back Martell Irby and defensive back Mo Osling III worked off to the side of the practice field with a trainer. … Defensive lineman Martin Andrus Jr., who hurt his leg in warm-ups before the Oregon State game, was not present during the portion of practice open to reporters. … UCLA did not hold media availability with players or coaches before or after practice.