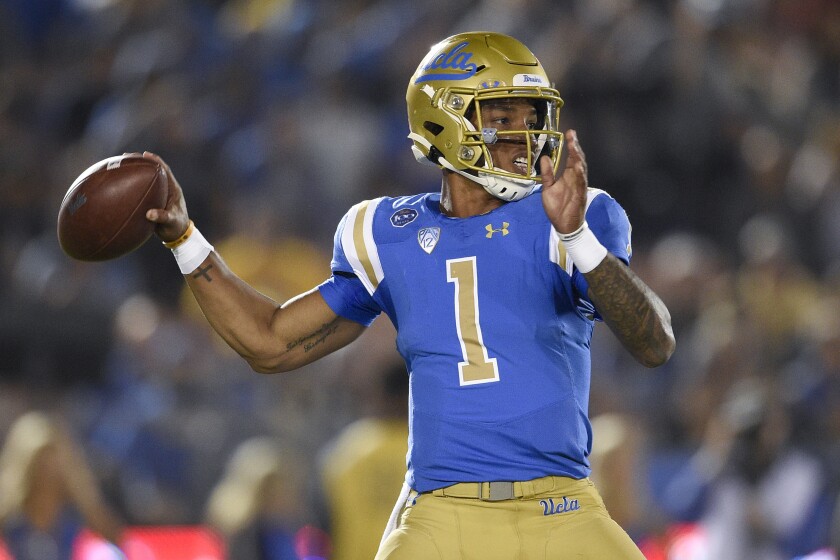 UCLA rolls to victory over Colorado, extends its winning streak to three

Some sentences seemed unlikely to be uttered at the Rose Bowl given the way things were trending for UCLA less than a month ago.

The Bruins have a three-game winning streak.

A bowl game is a real possibility.

Ethan Fernea made the play of the game.

All were true Saturday night after UCLA’s improbable resurgence continued during a 31-14 victory over Colorado in which the Bruins blitzed the Buffaloes early and piled on late.

Quarterback Dorian Thompson-Robinson returned from a knee injury suffered in the previous game to spark an efficient offensive performance and the Bruins’ defense continued its stunning late-season turnaround, much to the delight of an announced crowd of 47,118.

After turning away in disgust for more than a month, UCLA fans should take a long look at their team now. The Bruins (4-5 overall, 4-2 Pac-12 Conference) have exceeded their win total from last season while setting up a showdown Nov. 16 in Salt Lake City with Utah, which sits alone atop the Pac-12 South after USC’s stumble against Oregon.

The Bruins also can advance to a bowl game by winning two of their last three games, with the Pac-12 championship game and a Rose Bowl berth remaining as possibilities.

“It’s definitely a good feeling knowing that you’re in control of your own destiny,” Thompson-Robinson said. “Now we’ve just got to go and put the work in and get it done.”

Colorado (3-6, 1-5) contributed to coach Chip Kelly’s first three-game winning streak with the Bruins, the Buffaloes faltering on defense and missing two field-goal tries, including a 27-yard attempt that hit the goal post and bounced back.

Kelly’s offense did not produce another yardage bonanza but it didn’t need to on a night when Thompson-Robinson was nearly perfect in the first half. His final statistics weren’t bad, either. He completed 21 of 28 passes for 226 yards with two touchdowns and one interception, and rushed for 38 yards.

Joshua Kelley had 126 yards rushing and two touchdowns for the Bruins, who finished with 426 total yards.

UCLA dominated in all facets while building a 17-0 lead in the first quarter. The Bruins outgained Colorado 201 yards to 20, gave up only one first down and held the Buffaloes to 0 for 4 on third downs.

Thompson-Robinson was UCLA’s offensive catalyst, completing 10 of 11 passes in the quarter for 118 yards and two touchdowns. The one incompletion? A pass that was dropped by tight end Greg Dulcich.

Everything went the Bruins’ way early, even plays that went awry. Thompson-Robinson fumbled a handoff to Kelley, who picked up the ball and ran the other way for six yards. The drive ended with Thompson-Robinson firing a 16-yard touchdown pass over the middle to tight end Devin Asiasi for the game’s first points.

Thompson-Robinson’s most memorable pass came later in the quarter when he heaved the ball toward the end zone from near midfield. Fernea, a walk-on receiver, ran under the ball and made a diving 45-yard catch for his first career touchdown, his shoulder pad popping out of his jersey on the play.

The quarterback sprinted to celebrate with his far less renowned teammate, who was mobbed by every Bruin in the vicinity.

“I don’t even think he was expecting me to throw him the ball,” Thompson-Robinson said, noting that he spotted something in the Buffaloes defense that prompted him to do just that. “He went and got the ball, so that was a great route by him and a great catch.”

Fernea’s touchdown gave UCLA a 17-0 lead late in the first quarter and appeared to portend a drama-free evening for the home team.

But Colorado largely owned the second quarter, holding the Bruins scoreless and finally sustaining its first meaningful drive by converting a host of third downs. On third and goal from UCLA’s two-yard line, quarterback Steven Montez rolled out and dove into the corner of the end zone for a touchdown.

Thompson-Robinson completed passes with such ease in the first half that it looked as if he was throwing against traffic cones instead of defensive backs. At one point in the second quarter, he had completed 13 of 15 passes, with both of the incompletions coming on drops. His first incompletion on a poorly thrown pass came when he overthrew a streaking Kyle Philips shortly before halftime.

Thompson-Robinson was back to finding his rhythm midway through the third quarter, completing all four passes on UCLA’s 80-yard drive that ended with Kelley plowing ahead for a five-yard touchdown run. The Bruins led 24-7, more than enough cushion to withstand Montez’s 27-yard touchdown pass to Tony Brown with 5 minutes 57 seconds to play.

Colorado, which managed only 283 yards, suffered its fifth consecutive loss and third consecutive blowout defeat on the road.

Linebacker Krys Barnes, who intercepted a pass in the first quarter, said the Bruins’ improvement on defense came from a collective decision to play faster and more physical during an open week last month.

“It’s going well for us right now,” Kelley said, “but we’ve still got to remain humble.”