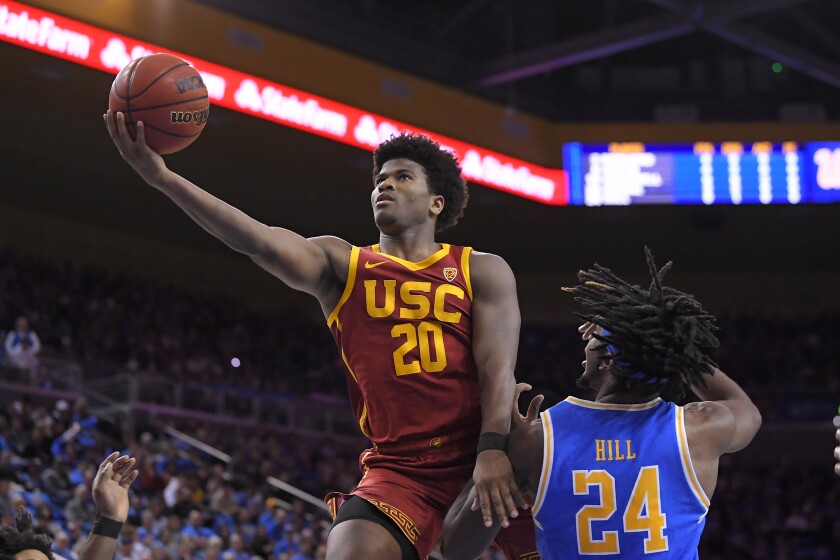 USC’s Ethan Anderson finds his safe place on court, thanks to mom

The clandestine therapy sessions began many years before Ethan Anderson actually understood he was being analyzed.

When it came to her son, Pam Anderson was purposefully subtle about her prying. Ethan wasn’t the type to share his feelings. His mom understood that better than most.

But as she returned to school to pursue a future as a full-time therapist, Pam found herself particularly fascinated by athletes. How their minds worked. How so many tiptoed on a razor’s edge between fragile and fearless. How so few had a safe space in which to confront those fears and doubts.

She worried especially about her son, who rode a City Section title last February to a late offer from USC in March.

“I’m usually that safe space for athletes to say, ‘I’m nervous. I’m scared. I’m overwhelmed,’ ” Pam said. “But the idea that my son doesn’t have that, it makes me very uncomfortable.”

So Pam tried her best to covertly build Ethan’s confidence. She forwarded his YouTube highlights and sent him paragraphs-long, pregame pep talks via text. She wanted him to know he belonged.

At Fairfax High, that was never in question. Ethan was the undisputed floor general; teammates called him “No Limit” for how he bent games to his will, taking over in whatever way was needed. His confidence seemed unwavering, impenetrable.

“He set the tone,” said Harvey Kitani, his coach as a freshman at Fairfax. “Everyone always listened.”

It wasn’t as clear how he’d fit in at USC. Though, not even his mother could have anticipated Ethan’s sudden ascent as the Trojans’ starting point guard, a role he’ll be seriously tested in Thursday against Oregon and Pac-12 leading scorer Payton Pritchard.

It took such serendipitous circumstances to get him to USC in the first place. A late addition to the Trojans’ highly ranked recruiting class, Ethan was two months away from moving to Las Vegas, with his bags already packed, when Marvin Menzies, a coach he’d come to consider as family, was fired last March at Nevada Las Vegas.

USC was the first school to call a few days later. Still, the Andersons were skeptical. For years, with Ethan dominating down the street, Andy Enfield’s staff had shown little interest.

“It was crickets for the longest time,” Pam said. “So naturally, I went into it feeling a certain way.”

But they came out of the meeting with most of their questions answered. USC’s coaches cited specific examples of how Ethan improved over his senior season and laid out a plan for him to improve further. They’d been watching all along.

It was enough to convince Ethan he wasn’t just an afterthought.

“I didn’t want to just be someone filling up a roster spot,” Ethan said. “I really trusted what they were telling me. They didn’t say I was going to come in with a starting spot. They just told me to work hard, and anything would be possible.”

By the time the season arrived, he’d surpassed even his own expectations for what was possible. He’d gone from being the 328th-ranked recruit in the nation to USC’s starting point guard in a matter of months.

“I think about it every day,” he said. “That doesn’t happen.”

Still, Ethan couldn’t shake the feeling he had something to prove. He’d never played with so much talent around him, and it was hard not to ruminate on his place in it. The Trojans didn’t need him to score like Fairfax had. Not with Onyeka Okongwu or Jonah Mathews or Nick Rakocevic to carry the load.

So as the season began, he focused more on facilitating.

But the more Ethan deferred, the less smoothly USC’s offense seemed to run. Over nine games between the end of November and the beginning of January, he averaged fewer than four points per game. The quiet stretch was bookended by USC’s two worst defeats of the season, a 22-point loss to Marquette and a 32-point beating at Washington.

He was stuck in his own head.

Enfield didn’t hold back. He hoped his point guard wouldn’t either.

“We need him to play like the L.A. City player of the year,” Enfield said then. “He wouldn’t have done that at Fairfax, right?”

That week, as a matchup with UCLA loomed, Pam sent Ethan highlight videos from his senior season as a reminder. He was still the same player who took over games at Fairfax, she assured him.

“I’m looking forward to the day that No Limit becomes a Trojan,” she texted.

She didn’t have to wait long. Eleven seconds into the first half at Pauley Pavilion, he made a grand entrance, catching a lob for the first points of the night. He scored 12 more in an aggressive performance, setting the tone for a statement game from USC’s struggling offense.

For Ethan, it felt like a moment of clarity. “My mentality has changed,” he said.

That work is still ongoing, as USC (15-3, 4-1) heads to Oregon (15-4, 4-2) in a tie for first in the Pac-12. Ethan followed up his statement game with a sleepy, two-shot showing against California, before coming alive again with 11 points in a stunning come-from-behind win over Stanford. He played 40 of 45 minutes against the Cardinal and did not commit a turnover.

Ethan, who is averaging 5.6 points and 4.8 assists a game, will need to be at his best if USC has any hope of holding on against an Oregon offense that ranks among the best in college basketball.

But as his mom’s pregame pep talk will probably reflect, that should be no problem for No Limit.

Update: After rallying from 20 points down at halftime against Stanford, the Trojans face an even tougher test. Oregon boasts the best offense USC has faced this season, with a legitimate All-American contender in Pritchard. The Trojans must lock the Ducks down with aggressive defense at the three-point line if they have any hope of keeping up with one of the nation’s best shooting backcourts.