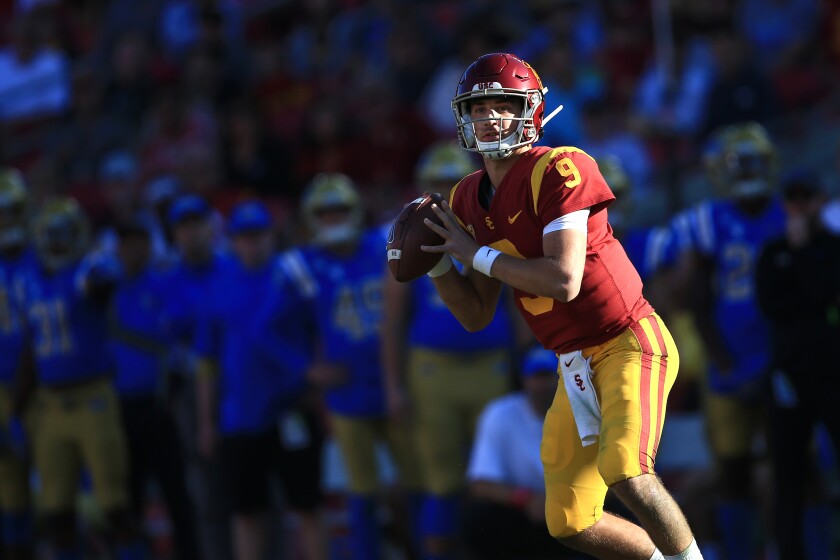 His big debut was minutes away and, by his own account, Kedon Slovis was a mess.

He’d spent a month preparing for this moment, but the gravity was only now weighing on him. Slovis was sure he’d never been so nervous. His mind cycled feverishly through every detail as he tried his best to ignore the butterflies somersaulting in his stomach.

But when the moment finally arrived, USC‘s future quarterback appeared confident as he strode into the spotlight. With a crowd watching closely, Slovis took a deep breath, grabbed a microphone and began to sing.

He was still more than a year away from making his football debut for the Trojans, a performance that would turn his world upside down. But before the relatively overlooked, three-star prospect stunned Los Angeles with his sudden rise as a freshman, his one-night turn as frontman stunned a Desert Mountain High (Ariz.) theater audience.

His father was among the surprised.

“I’d never heard him sing in front of people in my life,” Max Slovis said.

Yet, there Kedon was, belting out Backstreet Boys.

“I was in shock,” his high school coach, David Sedmak, said.

No one expected Slovis to step quite so far out of his comfort zone. Most people knew him as a modest, unassuming type; not shy exactly, but never the loudest in the room. “He likes to get comfortable in his surroundings,” his father explained. So Slovis often clung to the familiar, spending most of his time with a tight-knit circle of friends he’d known his entire life.

But there he was, taking a full-fledged leap into the unknown, hitting the high falsettos in The Who’s “Who Are You?,” rapping the verses of “Feel Good Inc” by Gorillaz, and tapping into his inner-boy band with the Backstreet Boys. He hadn’t sang for a crowd since sixth-grade choir. No matter. When a friend needed a lead singer for a battle of the bands competition, Slovis offered without a second thought.

It was a bold step for the high school’s star quarterback, who, on the field, was struggling with intermittent bouts of self-doubt. Before USC offered a scholarship, only a few top programs had shown serious interest. He and his coaches had spent months sending out tape, trying anything to get his recruitment off the ground. He tried not to let the lack of attention weigh on him, but as Desert Mountain faltered, winning just three games, Slovis questioned whether he’d ever be the quarterback he thought he could be.

“I don’t know what it was, but in high school I wasn’t very confident,” Slovis said during a recent interview. “It just wasn’t in my nature.”

What he showed on stage that night was something he’d take with him to USC, where as a freshman he would shatter school records and reset expectations.

When he stepped outside of his comfort zone, Kedon Slovis was capable of much more than what many people expected of him.

When he arrived at USC last spring, he was fairly unheralded — and several notches below JT Daniels, the sophomore incumbent, on the depth chart.

It was also a clean slate. He didn’t know anyone at USC, and they didn’t know him. There was no choice but to embrace the unfamiliar. It was up to him alone to prove whether he belonged.

“It was good for me, I think,” he said. “When I first got here, I was a little shy around everyone. But I realized I can’t be that guy. It forced me to grow up really quick.”

During one meeting, early in the spring after he graduated from high school early, offensive coordinator Graham Harrell challenged the quarterbacks to take command of the team. If they wanted respect, he told them, they needed to earn it.

It helped to have a coordinator who was a believer from the start. Harrell continuously referred to Slovis as “a special talent.” And as the young quarterback moved to No. 2 on the depth chart during fall camp, beating out more experienced options in Matt Fink and Jack Sears, Harrell noted that “talent-wise, he’s as good as I’ve ever seen.”

Said Max Slovis: “It can have a great effect on you, when someone tells you they believe in you and that you’re special.”

Soon, Max sensed a shift in his son. There was an aura of self-assurance he’d never felt from Kedon before.

“The way he interacted with everything around him was different,” Max said. “In the past, he wasn’t so sure. Now he steps into a room with both feet. You know he’s there.”

At USC, there would be no time for baby steps. It took just two quarters for the freshman to be called upon. Daniels suffered a season-ending knee injury in the opener against Fresno State, thrusting Slovis into a starting role. As he stood by his locker at halftime, Slovis could feel the gaze of his teammates, sizing him up, pondering whether he was ready.

None of them were left wondering a week later, when Slovis completed a season-high 84% of his passes, carving up Stanford for 377 yards and three touchdowns. After the game, the baby-faced freshman stood atop a ladder on the sideline, conducting the band with sword in hand as the USC fight song was played.

It was a coming-out party for the ages, but just as quickly as everything came together against Stanford, it all fell apart the next week at Brigham Young. In his first road test, Slovis had two passes picked off and never recovered. He lost his discipline. As BYU dropped eight defenders into coverage to confuse him, he threw into too many tight windows. With the Trojans driving in overtime, he had a third pass picked off, clinching defeat, when a short field goal would have tied the score.

“I had no idea what was wrong or why I was struggling,” Slovis recalled.

Harrell could see what was happening. Slovis was doubting his reads and second-guessing decisions. He didn’t fully trust himself yet. It would take some time for him to find that confidence. So Harrell did his best to build him up.

“He’s a youngster,” Harrell said of Slovis after the BYU loss. “Sometimes you’re going to make some mistakes. But he’s going to be a special player.”

A concussion kept Slovisout of most of the next two games. When he returned a month later, following the bye, something had clicked into place. Against a Notre Dame secondary which had allowed only three passing touchdowns in five games, Slovis came alive late in a close loss, passing for 181 yards and two scores in the second half.

The defeat left USC with a record of 3-3, but Slovis looks back at that game as the point he stopped questioning himself.

Two weeks later, he had a pass intercepted early in a game at Colorado. It was the kind of mistake that before might have snowballed into others. But Slovis was calm, assuring the sideline the Trojans would score on their next drive.

With USC trailing by 10 points in the fourth quarter, he rallied the offense with two late touchdown passes to Michael Pittman Jr.

“That’s who he is,” USC coach Clay Helton said afterward. “In the brightest moments and when it’s time to show immense poise in a situation, he’s done that.”

As USC finished with five wins in its final six games, Slovis was the catalyst. With his confidence soaring, he passed for at least 400 yards and four touchdowns in four of the victories, a feat no other USC quarterback had achieved.

And Harrell kept right on challenging him. After USC’s first drive stalled in the regular season finale against UCLA, the coordinator “ripped me a new one,” Slovis recalled. By the end of the game, he had passed for a school-record 515 yards and four touchdowns.

When the Trojans play Iowa in the Holiday Bowl in San Diego on Friday, Slovis will take these gaudy passing numbers into the game: 3,242 yards, 71.8% completion percentage and 28 touchdowns.

His top receiver went one step further. “I did not see him becoming the new superstar quarterback of college football,” Pittman Jr. said.

Deep down, Slovis had seen it. He just needed an opportunity to steel that confidence.

Shortly after the 2019 Heisman Trophy was awarded, futures odds were released on the favorites for next year’s winner. Slovis made the list of top contenders. A year after coming to USC as an afterthought, he couldn’t help but laugh when friends sent him text messages about it.

“If I would’ve told anyone a year ago that I’d have Heisman odds, they would’ve laughed in my face,” he said. “So that’s kind of nice to think about.”

The modesty remains. But now, with his debut behind him, Slovis may be poised for an even more dynamic encore.