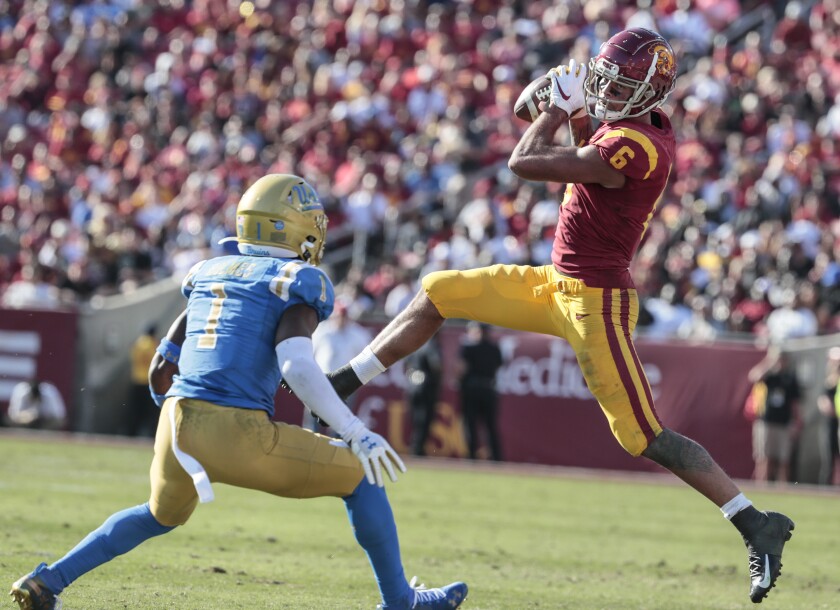 USC’s Michael Pittman Jr. puts on a show in his final game at the Coliseum

The game was in hand, the Victory Bell was ready to be painted in USC’s colors again, and the Trojans started to celebrate. With 38 seconds remaining, USC stopped UCLA’s final drive on fourth down, and players started jumping and waving their arms. Michael Pittman Jr. calmly put his helmet on and went back on the field for a final kneel down.

It was his final play as a Trojan in the Coliseum.

The senior bid farewell to the Coliseum in style, catching 13 passes, which tied a career high, for 104 yards and two touchdowns in USC’s 52-35 win over UCLA on Saturday as the Trojans (8-4, 7-2 Pac-12) had four 100-yard receivers in one game for the first time in school history.

True to his level-headed reaction to the rivalry win, Pittman didn’t show much emotion while immediately reflecting on his final home game.

“It just happened so fast,” Pittman said. “I’m just so thankful that I got the opportunity to battle, just with my brothers.”

Pittman received the loudest cheers of any senior running out of the tunnel on Senior Day. The Westlake Village Oaks Christian alumnus met his family on the field. His father, former NFL running back Michael Pittman, was wearing a red No. 6 USC jersey. The receiver who won a Rose Bowl as a freshman, grew into a budding star as a junior, then solidified his position as one of the best receivers in the country as a senior never cracked.

“I didn’t even see him tear up or nothing,” said running back Vavae Malepeai, Pittman’s roommate. “He was straight the whole time. He was having fun.”

“His stats can’t even explain half of what he does for the offense,” Malepeai said. “It’s the impact he has on everybody around him when he’s on the field and off the field. When he’s just around the team, the whole morale of the team is just up there.”

The USC receivers feasted on a struggling UCLA defense. Drake London (142 yards), Amon-Ra St. Brown (128) and Tyler Vaughns (106) each had 100 yards by the fourth quarter.

When it came time to pick the player of the game, the Coliseum PA announcer highlighted “the whole Trojan offense.” Quarterback Kedon Slovis threw for a school-record 515 yards, the most in the history of the rivalry.

“Any of you could probably throw for over 100 yards with these receivers,” Slovis said to reporters.

Pittman had nine catches in the first half as the Trojans went ahead 24-14 at halftime. He said during the week he was looking forward to matching up with UCLA cornerback Darnay Holmes, a former 7-on-7 teammate. He ends his USC career as a Rose Bowl champion, a Biletnikoff Award candidate and three-time winner in the crosstown rivalry. With the Trojans heading to a bowl game, he hopes to add more to his resume.

“It’s been a good ride,” Pittman said, flashing a smile, “but I still got one, maybe two more games left. I’m not done yet.”