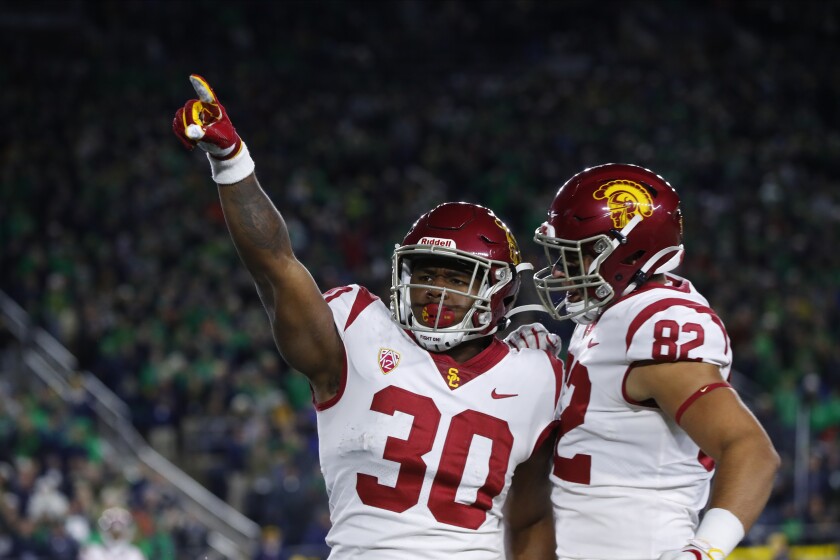 USC’s Stepp and Carr should get more carries against Arizona

One minute remained in South Bend, and Fighting Irish defenders stood stacked at the goal line, but Markese Stepp made his intentions clear to his quarterback. He wanted the ball.

“He was fired up,” Kedon Slovis recalled of the USC running back. “The box is loaded, and we gave it to him, anyway.”

In his anticipated return to the state of Indiana, Stepp wasn’t going to miss an opportunity to punch in that score, even if it was ultimately for naught in USC’s loss. But now, with Vavae Malepeai out for the foreseeable future following knee surgery Tuesday, there should be plenty more where that came from.

Stepp is expected to split carries with junior all-purpose back Stephen Carr going forward. But considering Carr’s skill set, it’s likely Stepp takes the lion’s share of work between the tackles and in short yardage. With more than 14 touches per game to replace in Malepeai’s absence, his role could expand substantially.

How those carries will actually be split is to be determined. Neither Carr nor Stepp has carried much of a load in their collegiate careers.

Carr probably will play more in passing situations, but he hasn’t received more than nine carries in any game this year. Only once in three seasons has he had more than 14.

Stepp has double-digit carries in each of his past two games, but he acknowledged he was winded at times Saturday. The extra work, he says, has helped him find a groove over that stretch, as he’s averaging nearly eight yards per rush.

“The more carries any running back gets, the better rhythm they get,” Stepp said.

Establishing that rhythm moving forward will be crucial for an offense that’s turned to the ground more than expected recently as opposing defenses drop eight into coverage on a week-to-week basis. Those light fronts should continue Saturday against Arizona, which could use the extra defensive backs to help bolster a pass defense that ranks 11th in the Pac-12.

As such, offensive coordinator Graham Harrell said the Trojans planned to use Stepp and Carr “just like we did with Carr and Vae early on.” Over the first three games, Malepeai carried the ball 56 times.

“When they’re fresh, we’ve got two pretty special backs playing there,” Harrell said. “If they get a little gassed, we’ll figure it out.”

As far as Stepp is concerned, he can carry the ball more than he has thus far.

“Whatever the coaches give me, I think I’ll be able to handle it,” Stepp said. “We’re all going to have to step up.”

After returning to health during its week off, USC’s defense gutted through injuries as best it could last week against Notre Dame, as linebacker Palaie Gaoteote and cornerbacks Olaijah Griffin, Isaac Taylor-Stuart, and Greg Johnson all played through pain down the stretch.

None of those four practiced Tuesday, and it’s possible that none will be available when USC takes on Arizona.

Gaoteote is “doubtful” with a high ankle sprain, coach Clay Helton said, and given the lingering nature of the injury, it could keep the linebacker out longer than this week. Without him, Kauni Mauga will step into a significant rotation role.

Greg Johnson, the starter at nickel corner, injured his shoulder against Notre Dame and was ruled out by Helton on Tuesday. He could face an extended absence, as Helton said he “needs time for rehab.”

The status of USC’s two starting outside corners, Griffin and Taylor-Stuart, is less certain. Griffin aggravated the lower back injury and bulging disk that held him out against Washington. Taylor-Stuart has a high ankle sprain, which Helton said was further along than the one suffered by Gaoteote.

USC had some hope that senior captain Jordan Iosefa might return this week to bolster the linebacking corps. But Helton said he expects Iosefa to continue sitting out.