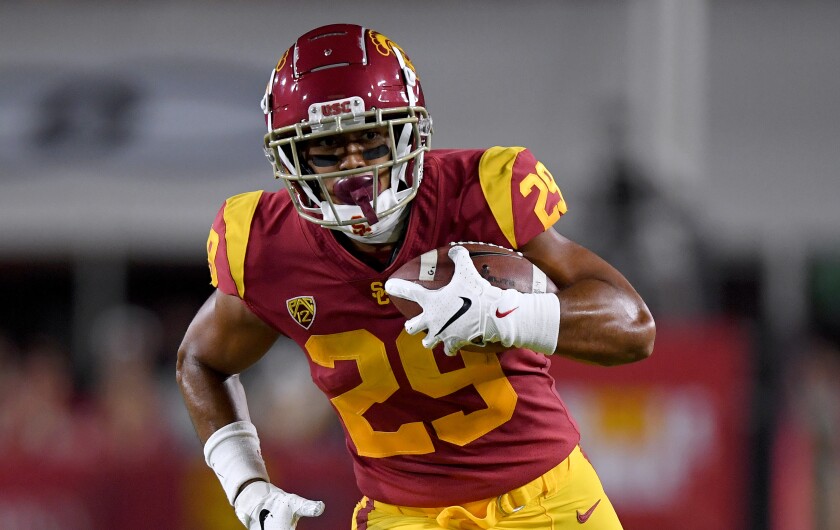 USC’s Vavae Malepeai will have knee surgery, with no timetable for his return

The soreness in his balky knee had long lingered. But for seven weeks this season, Vavae Malepeai played through the pain, anyway, leading USC’s split backfield in carries.

Following a depleting defeat at Notre Dame on Saturday, however, that pain became too much for even the junior ballcarrier to bare. Malepeai, USC’s leading rusher, will have surgery to “clean out” his knee, USC coach Clay Helton announced on Sunday.

With six games left in the season, there is currently no timetable for his return.

“Vavae is a warrior,” Helton said. “[He was] dealing with a sore knee and really fighting through it for his team. It’s just gotten to the point where it’s gotten too sore, so we’re going to go ahead and take care of it now. What’s fortunate is we still have a lot of talented backs on this team.

Malepeai had fought through the injury since the preseason, as he sat out most of USC’s fall camp to recover. Still, through Saturday, Malepeai had carried the ball 87 times since then -- more than twice as much as USC’s two other lead backs, Stephen Carr and Markese Stepp. Without him, both are expected to see their roles expanded considerably.

Against Notre Dame, even before Malepeai’s season was in question, Stepp made an especially strong case for a larger role. The redshirt freshman was far and away USC’s most effective running back, rushing for 82 yards and a touchdown on 10 carries. On one particularly memorable attempt, Stepp carried several Irish defenders on his back as he rushed for a 19-yard first down.

After the game, both Helton and USC offensive coordinator Graham Harrell were asked why Stepp didn’t receive more than just 10 carries. Helton rejected the notion that Stepp didn’t have an increased role, while Harrell noted that Stepp received as many carries “as he could handle.”

“He was sucking wind from what I understand,” Harrell said.

Asked about Harrell’s assertion, Stepp agreed that he was tired at times.

“When you’re carrying six people, you tend to get winded,” Stepp said with a smirk.

Without Malepeai, Stepp will likely carry the load between the tackles going forward, as Carr remains more of an all-purpose threat in space. Over his past two games, Carr has 159 total yards on just 19 touches, but his carries have been even less consistent than Stepp‘s.

Only Malepeai had averaged more than 10 carries per game this season, and as such, his absence will assuredly shift the focus in the backfield.

It may also open up another opportunity for an unused back. Helton said on Sunday that freshman Kenan Christon may get more chances to prove himself over the next four weeks, with the intention of still using this season as a redshirt year.

A few minutes after he lay on the turf, nursing a painful ankle sprain, USC linebacker Palaie Gaoteote taped up his ankle and gutted through the rest of the game against Notre Dame.

He wasn’t the only one on USC’s defense playing through pain, as the Irish offense got rolling in the second half.

“There were a bunch of kids that I just thought were warriors that suffered injuries in the game and went back out there and battled,” Helton said.

Injuries hit USC’s secondary especially hard. Cornerback Olaijah Griffin re-aggravated a back injury that kept him out the previous two weeks, while fellow starting corner Isaac Taylor-Stuart sprained his ankle, but was able to return. Nickel corner Greg Johnson also suffered an injury to his shoulder.

Helton didn’t have a status update on either of the three defensive backs or Gaoteote; though, none of the injuries are believed to be serious.