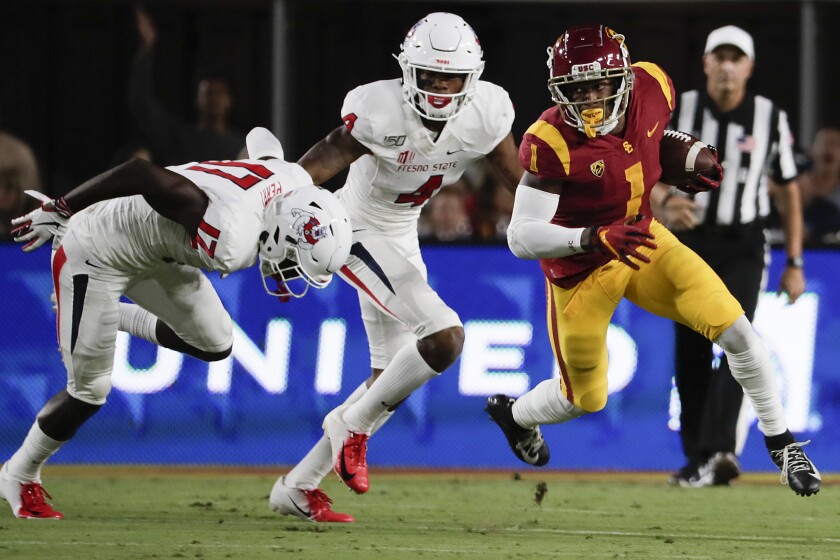 After first considering a transfer last spring, only to return for his junior season, USC receiver and kick returner Velus Jones Jr. has decided to reenter the transfer portal.

His decision comes after a campaign in which he failed to find a foothold in one of the Trojans’ deepest rotations. As other receivers passed him up on the depth chart, Jones didn’t record a catch until mid-October. He finished the season with six catches for 35 yards, his lowest totals since he arrived at USC.

But Jones opted to stay at USC in hopes that its new Air Raid would provide ample opportunity to spread the ball out to a cadre of different receivers. Those circumstances ultimately didn’t play out as planned, as the Trojans’ high-powered offense primarily fed its top four receivers instead.

As such, Jones proved to be the odd man out on offense. He did leave his mark on kickoffs, returning a kick in the opener against Fresno State for a crucial 100-yard score. By sheer number of returns, Jones finishes his USC career as one of the more decorated returners in program history.

Jones should be immediately eligible to play elsewhere as a graduate transfer.

Regardless of whether Jones actually does transfer this time around, USC should be just fine at receiver. The Trojans will be without their top target, Michael Pittman Jr. But pending an early draft decision from Tyler Vaughns, USC will have the rest of its receiving corps intact.

Redshirt freshmen Kyle Ford and Bru McCoy, both of whom were top recruits a season ago, are expected to step into that void.