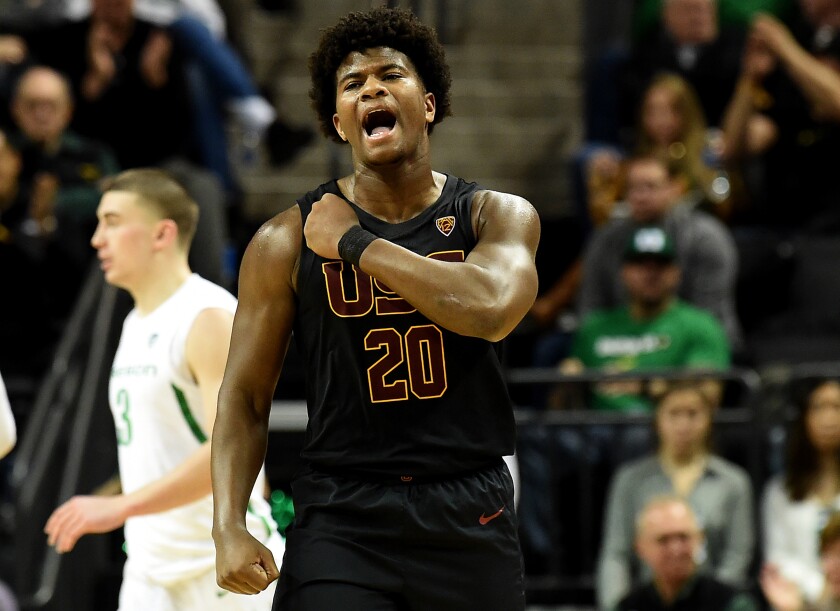 Last March, in the opening round of the Pac-12 tournament in Las Vegas, USC beat Arizona for its 16th win of the season. It was a much-needed victory, after suffering four straight disappointing defeats. It also turned out to be USC’s last of the season.

The Trojans lost the next day, their season ending unceremoniously at 16-17.

Fast forward to this week, and USC has a chance to best last season’s win total before the end of January. With Utah and Colorado visiting, the Trojans sit at 16-4, winners of 10 of their last 12.

If not for a devastating double-overtime road loss to Oregon last week, they’d be firmly in the Pac-12 driver’s seat, just as the conference season enters its most crucial stretch.

“We were right there,” USC coach Andy Enfield said after the loss to Oregon. “But you have to finish.”

Finishing hasn’t always been easy for USC under Enfield, with February proving to be a particularly brutal time of year. Over his six seasons in Los Angeles, Enfield’s Trojans are 14-31 during the penultimate month of the college basketball calendar. More than once, they’ve hit a cold stretch and never heated back up again.

In 2016, USC was 17-5 when February arrived, with one of the Pac-12’s best offenses at its disposal. But after a home victory over UCLA, the Trojans won only three of their next 11 games and were eliminated in the first round of the NCAA tournament.

USC lost four in a row in February the next season, and three in a row the season after that. Only once under Enfield have the Trojans finished with a record above .500 in February.

It’s enough of a distressing trend to prompt questions as that part of the calendar approaches again. But there are some reasons to believe that this USC team might not fall victim to the same late-season slump.

It starts with defense. Namely the fact that USC is arguably playing better on that end than at any point in the Enfield era. Inside the arc, opposing offenses are shooting just 43%, good for 21st-best in college basketball. Despite the fact that its defense rarely forces turnovers, USC still ranks among the best in defensive efficiency in the nation, according to college basketball analytics site KenPom.com.

“We play very hard,” he explained. “We’re just tough as a group. They’re tough mentally, tough physically. We changed some things about how we drill defense this year, and it’s helped us. Our players have bought in and we have an identity defensively.”

That defense will face two tough tests this week as Utah and Colorado are coming in hot, fresh off matching home sweeps of the Washington schools. It’s the kind of midseason weekend that could be ripe for a letdown, if USC can’t exorcise its February demons this season.

Nick Rakocevic is confident that won’t be a problem, and he points to USC’s depth as one of the main reasons why. But the senior forward also offers a more abstract explanation for his confidence.

“Everybody knows their role,” he said. “Anybody can come in and have an effect on the game.”

For Rakocevic, that role has changed in recent weeks. He has struggled offensively over that stretch, with just 34 points combined over his last four games.

The Trojans haven’t needed him to score. And as long as they keep winning through February, Rakocevic doesn’t mind.

“The mentality is just completely different here right now,” he said. “That’s why we’ve been so successful.”

Update: USC very nearly took control of the Pac-12 on its trip through Oregon. Now it must try to steer its way past a Utah team that’s surprised a few top teams this season. The young Utes have upset Kentucky, Brigham Young and Minnesota and have lost only once in their last five trips to Galen Center. Utah’s offense is capable of keeping up with USC, but its defense has been perhaps the worst in the Pac-12 in January.