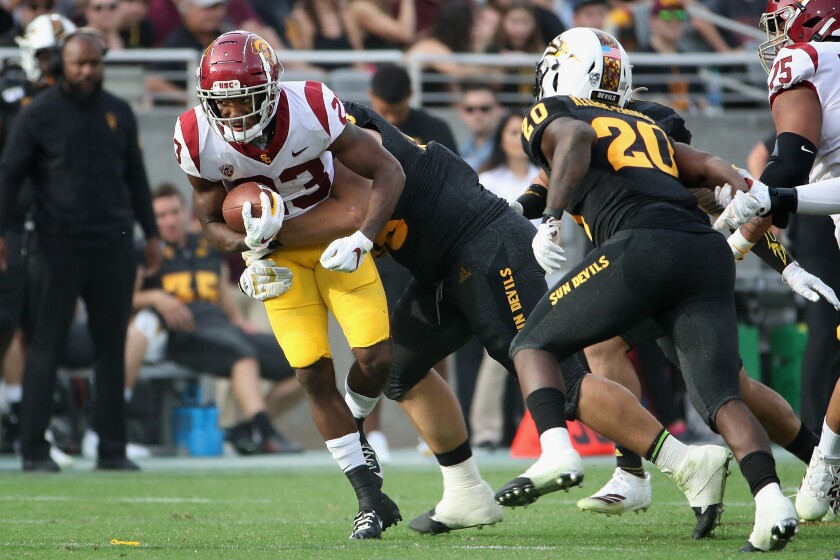 It was a picture perfect start, a record-setting, statement-making first quarter for the ages. And within a couple of hours, it was very nearly squandered.

Fresh off its most disappointing defeat of 2019, with its coach under fire and its season on the brink, USC burst out of the gates Saturday intent on taking out its frustrations on Arizona State. Quarterback Kedon Slovis came out firing, with four touchdowns in the first quarter. The defense came out ferociously, with only a single yard allowed over that same stretch.

But over the next three quarters, that near-perfect start nearly came apart at the seams. What began as smooth sailing to bowl eligibility quickly became a rocky ride just to stay alive, one the Trojans were lucky to survive in a 31-26 victory.

What began with an unrelenting aerial assault from the right arm of Slovis eventually ended with the outstretched left hand of senior defensive end Christian Rector.

With USC sitting at 5-4, the same record it held at this time last season, it was Rector who assured earlier this week that USC wouldn’t make the same mistakes it had a season ago, when it lost its final three games. But with Arizona State down a score and threatening with 30 seconds remaining Saturday, history seemed well on its way to repeating itself.

Here were the same penalties (11, in total), the same execution errors, the same special teams gaffes. Injuries were once again decimating depth. A three-score lead was slipping away.

Then, Rector came free off the edge and saw Joey Yellen, the Sun Devils’ freshman backup quarterback, cock back to throw. He leaped high into the air, arms outstretched, and tipped the pass. As it tumbled to the turf, Rector dived, cradling the ball with both hands just in time.

“I called game,” Rector said with a smirk.

His first-ever interception ensures that at least one thing will be different down the stretch for the Trojans. After missing a bowl game last season, they’re now officially eligible for the postseason.

But there was little enthusiasm for that milestone in the aftermath of Saturday’s escape.

“I don’t celebrate six wins,” said receiver Amon-ra St. Brown, who did plenty worth celebrating in an eight-catch, 173-yard performance.

Clay Helton agreed, assuring there was still plenty of time for his uneven team to accomplish more than it has thus far.

“We have higher standards,” Helton said. “We have more to play for.”

How much more is uncertain. USC (6-4, 5-2) is still down half a game in the Pac-12 South, unlikely to usurp Utah, and its embattled coach remains firmly on the hot seat, unlikely to save himself.

After Saturday’s narrow escape, with only two regular-season games remaining, it’s perhaps just as unlikely that new athletic director Mike Bohn will make a decision on Helton’s status before the season finale against UCLA.

USC couldn’t have written a better start Saturday, as Slovis completed his first 11 passes to open the game, slicing and dicing a defense that ranked among the Pac-12’s best. He hit Drake London from eight yards to cap a steady opening drive. He found Kenan Christon in the flat for a score, then downfield for a 58-yard touchdown play when Christon broke away from defenders.

With the Trojans backed up on their next drive at their own five-yard-line, Slovis sent another pass soaring downfield towards a pack of Sun Devil defenders. But St. Brown burst past the crowd to catch the pass in stride. Ninety-five yards later, USC had its fourth score in the game’s first 14 minutes and a 28-7 lead.

“I think it just shows what we can do with this offense when we execute,” Slovis said. “Obviously, later in the game, we didn’t execute as well. But it was a lot of fun.”

For Slovis, who grew up not far from Sun Devil Stadium, it was a historic start to a much-anticipated homecoming. After one quarter, Slovis had 297 passing yards, more than any college quarterback in a single quarter over the past 15 years.

Slovis would finish with 432 yards and four touchdowns. He spent two drives hooked to an IV in the on-field medical tent, dealing with cramps.

But amid his torrid start, there was no slowing Slovis down. It seemed only a matter of time before the rout was on.

Except, the rout never arrived. Instead, as its offense stalled and its defense wore down and its special teams looked far less than special, USC found itself up just a single score with three minutes remaining and Arizona State marching.

A near-perfect start had become a perfect storm.

USC would ultimately hang on, thanks to Rector, weathering a tough second half to hold off Arizona State in the final minutes. But the fact that the Sun Devils (5-4, 2-4) were even in the game at all, following the Trojans’ phenomenal first quarter, was certainly a cause for concern.