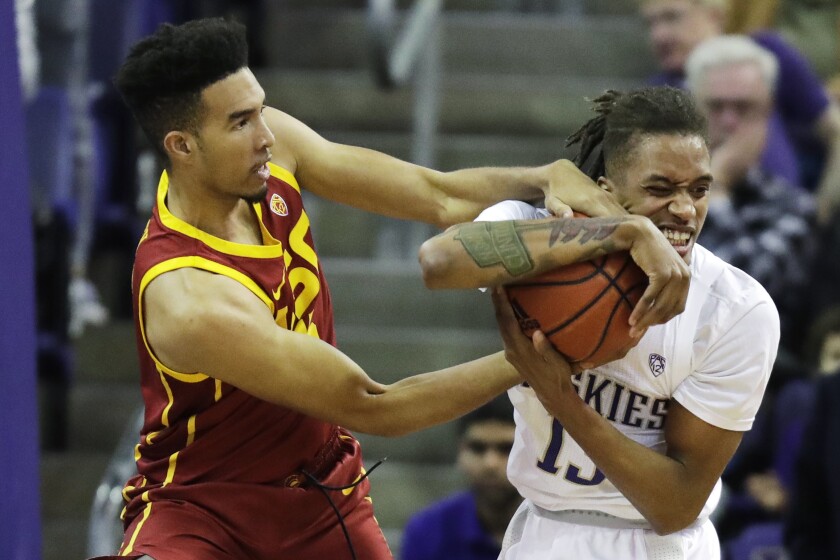 After a lackluster thud to begin Pac-12 Conference play, Washington rebounded with its biggest conference blowout in nearly a decade.

Isaiah Stewart scored 18 points and grabbed 10 rebounds, Quade Green added 14 points and Washington rebounded from a loss to open conference play with a 72-40 romp over Southern California on Sunday night.

Stewart was again dominant on the interior despite sitting the final 9 minutes of the first half with foul trouble. The freshman post was 6-of-12 shooting and had two of Washington’s 12 blocked shots. Fellow freshman Jaden McDaniels added 11 points despite an off shooting night, but also had seven rebounds and six blocks.

Washington (11-4, 1-1 Pac-12) had dropped two straight, including its Pac-12 opener on Thursday night against UCLA. The rout of USC was an impressive bounce-back performance by the Huskies.

“We should have never lost that game,” Green said of the 66-64 loss to UCLA. “We had to come out and lay one on them today.”

USC freshman Onyeka Okongwu had 12 points and nine rebounds, but was the only Trojans player in double figures. The Trojans (12-3, 1-1) had their seven-game win streak snapped thanks to a terrible night of shooting. USC shot 20% from the field and just 2 of 15 on 3-pointers. The lack of shooting from the perimeter allowed Washington’s zone to be even more effective in clogging the paint.

“When they got the ball in the paint we had length and athleticism flying around, which made it very difficult to score in the paint and that was what I loved the most,” Washington coach Mike Hopkins said.

USC had not lost since Nov. 29 when it lost to Marquette and opened conference play with a win at Washington State earlier in the week. The 40 points were a season-low for the Trojans. They scored 54 in a win over Fairfield in late November.

“Tonight is as poorly as we can play. We couldn’t make some of the stuff up that happened offensively tonight,” USC coach Andy Enfield said. “I never saw this coming. I thought our guys would come out and execute. We got the ball where we wanted for most of the game we just didn’t finish our shots and then we had a lot of silly turnovers.”

It was a matchup of talented freshmen in the post with Stewart and Okongwu going head-to-head. Stewart was the clear winner, but he also had a better supporting cast.

Washington used a trio of scoring runs to turn the game into a blowout. The Huskies jumped out to a 10-1 lead to start, but it was the run to close the first half with Stewart on the bench that was decisive. Washington led just 14-12 when Stewart checked out after picking up his second foul with 9:19 left in the half. The Huskies outscored USC 21-9 the rest of the half to take a 35-21 lead. Nahziah Carter scored eight points during the stretch and the Huskies received unexpected contributions from Nate Roberts off the bench with seven points and six rebounds in the first half.

USC pulled within 41-29 after Jonah Mathews hit the Trojans first 3 of the game and Nick Rakocevic scored. Washington answered with 11 straight points, started by McDaniels’ 3-pointer and capped by Jamal Bey’s dunk in transition and a 23-point lead.

Washington led by as many as 35 in the second half.