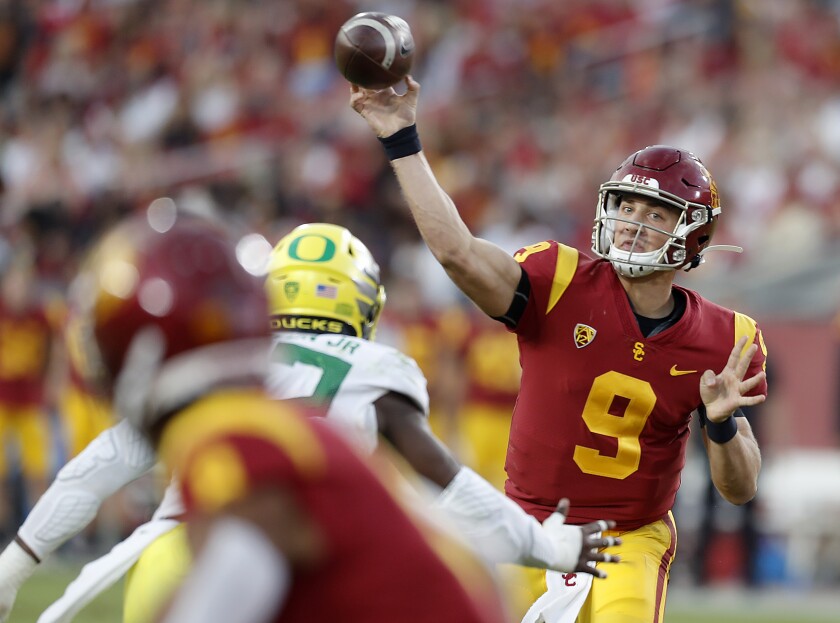 USC-Arizona State: A look at how the teams match up

Arizona State running back Eno Benjamin vs. USC’s edge defenders. Few backs in the Pac-12 are as capable of doing damage on the perimeter as Benjamin. His productivity has waned from his huge campaign last season, but his talent is still very much intact. He has nine touchdowns, tied for fifth in the Pac-12. His speed could be an issue for a USC defense that has struggled to defend the edge. The return of dynamic defensive end Drake Jackson should help the Trojans, but it doesn’t completely solve a problem that’s been glaring all season.

Four turnovers sunk the Trojans a week ago against Oregon, and it’ll be incumbent on freshman quarterback Kedon Slovis to iron out those mistakes against another of the Pac-12’s best defenses. With USC still down to just freshman Kenan Christon in the run game, Slovis should be busy again after passing a school-record 57 times last week. But finding a better run-pass balance will be crucial. Coaches have alluded to a few new wrinkles in the run game, which could mean an increased role as a rusher for wideout Amon-ra St. Brown. For durability reasons, it isn’t likely to result in a larger workload for Christon, who is averaging more than seven yards per carry.

Whether freshman quarterback Jayden Daniels plays will be a game-time decision. He practiced all week, reportedly without any sign of injury. Daniels is a dangerous scrambler, but, like Slovis, he’s been prone to lapses in judgment. However, Daniels has thrown just two passes that were intercepted. His improvisation could be a problem for a USC defense that’s had issues with quarterbacks like him. If Daniels doesn’t play, Joey Yellen, a freshman from Mission Viejo, will be the starter. Yellen hasn’t thrown a pass or run the ball.

A return to full strength — or, at least, close to it — should boost to a defense that’s struggled the last two weeks. USC came out strong against Oregon, then lost discipline. After allowing 87 points the last two weeks, USC’s defense will need to be more consistent to slow an Arizona State offense that’s capable of tapping into the Trojans’ most glaring weakness — the perimeter. A reinforced defensive line will help; Christian Rector and Jackson both are back in the lineup. But USC’s recent tackling problems are still a concern.

Until its last two games, in which it allowed 368 yards rushing, Arizona State’s run defense ranked among the best in the nation. After a bye, expect the Sun Devils to bounce back in that regard. Arizona State has trouble getting to the quarterback, with just 15 sacks in eight games. But it does create turnovers. No defense in the Pac-12 has forced more fumbles (11). Turnovers have sunk USC before. Arizona State hasn’t had a negative turnover margin in a game this season.

After giving up a 100-yard touchdown last Saturday, USC ranks last in the Pac-12 and 127th of 130 in college football in kickoff return yards allowed. This week, special teams coach John Baxter pointed to injury attrition as one reasonthat Trojans unit has struggled.

A win in Tempe would make USC bowl eligible, after it missed out on a bowl game last year following a 5-7 season.

Jackson (ankle) and safety Talanoa Hufanga (shoulder) are expected to play but could be limited in their first games back. … Running back Stephen Carr (hamstring) is a game-time decision.