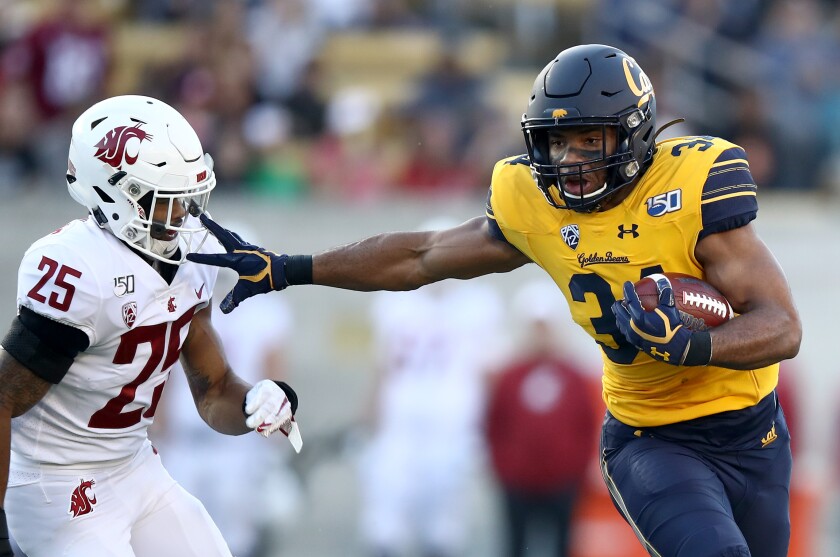 USC-California: How the teams match up

USC freshman quarterback Kedon Slovis vs. the Cal secondary. No quarterback in the last 15 years of college football had a quarter quite like Slovis did last week in Tempe, where he lit up Arizona State for 279 yards and four touchdowns in the first 15 minutes. Slovis slowed from there, but it was a brief reminder of how good the freshman can be with USC’s offense clicking. He could have a harder time against a Cal pass defense that ranks among the best in the Pac-12. Just two quarterbacks have managed to hit the 250-yard mark against the Golden Bears and both needed 48 or more passes to get there.

USC (444.1 ypg, 30.5 ppg): It’s been a month since USC had a full complement of ball carriers at its disposal, but after relying on speedy freshman Kenan Christon to carry the load over that stretch, the Trojans should finally get Stephen Carr — and potentially Vavae Malepeai — back from injury. Christon did well enough to convince coaches he shouldn’t redshirt, racking up 408 total yards and five touchdowns in four games. But with all three backs possibly available, USC won’t have to rely so much on Slovis to establish a rhythm against a stringent Cal secondary. Expect an even split in the backfield. The Trojans will be without starting center Brett Neilon, making matters a bit more difficult up front.

Cal (308.6 ypg, 19.1 ppg): The likely return of sophomore quarterback Chase Garbers, who has been out since September, should help, but the reality is Cal’s offense ranks worst in the conference for a reason. No Pac-12 team since Oregon State in 2015 has scored fewer than 20 points per game in a season, but Cal is well on its way to that futile mark. Its run game finally got going last week in a win over Washington State (196 yards), but prior to that, Cal hadn’t reached three yards per carry in a game since mid-September. USC is preparing for both Garbers and fellow quarterback Devon Modster, who had his best game of the season last week.

USC (417.9 ypg, 28.1 ppg): The Trojans’ struggling run defense stymied one of the Pac-12’s top running backs last week, holding Eno Benjamin to 52 yards rushing. This week’s test won’t be nearly as taxing. USC is finally returning to health up front, which helps matters even more. But the Trojans’ penchant for letting teams climb back into games remains a disconcerting trend. USC has allowed four touchdowns to each of its last three opponents, after not allowing more than three in any of the seven games prior. Much of the damage done in recent weeks has been through the air, where USC had started strong. The Trojans have allowed more passing touchdowns the last three weeks than the previous seven.

Cal (379.1 ypg, 20.7 ppg): For all of Cal’s offensive deficiencies under coach Justin Wilcox, its defense is still among the West’s best. An experienced secondary has held opposing quarterbacks to just nine touchdowns over nine games. Cal’s run defense has not been quite as strong, but it does feature the nation’s leading tackler, Evan Weaver, who has 10 more tackles than any other FBS player. He’ll be charged, along with the rest of Cal’s front, with creating pressure on Slovis, who has been sacked six times in the last three weeks.

After allowing another long return last Saturday, USC ranks 129th out of 130 teams in kickoff return yards at 29.72 per return. Cal isn’t much better at 118th.

In spite of its road woes under Clay Helton, USC has generally dominated Cal away from home. The Trojans’ last loss in Berkeley came in 2003, when the Golden Bears won in triple overtime. USC’s current receivers coach, Keary Colbert, caught the Trojans’ final touchdown in that game.

Like Malepeai, USC wideout Tyler Vaughns is a game-time decision after being limited in practice all week with an ankle injury. … Defensive tackle Marlon Tuipulotu, who did not travel to Arizona State last week because of a back injury, is expected to play. … Linebacker Palaie Gaoteote IV will miss this week with ankle and knee injuries.