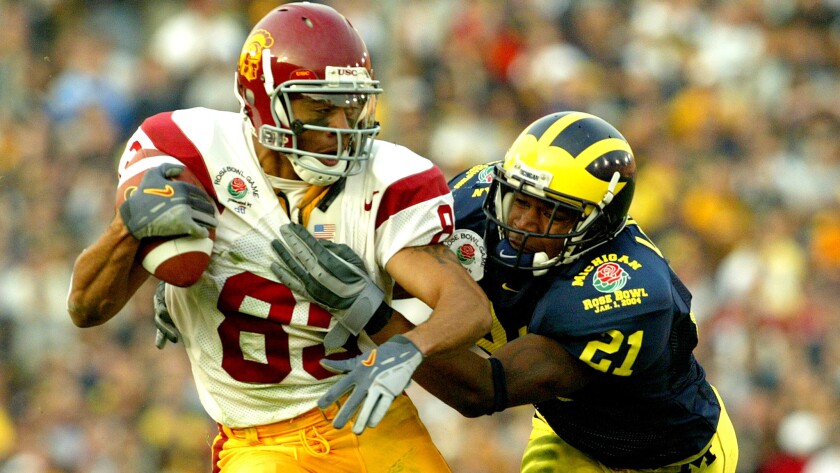 Keary Colbert’s long, sleepless and ultimately unforgettable Saturday began with an early flight out of Los Angeles International Airport. It ended with bowl eligibility and a new baby boy.

When the Trojans receivers coach arrived at LAX Saturday morning, the rest of USC’s coaching staff was already in Tempe, Ariz., preparing for a game at Arizona State. Colbert had stayed home the night before, preparing with his wife, Safiya, for the arrival of the couple’s first son.

Khari Colbert had originally been due 10 days earlier, the day before Halloween, which would’ve been a dream scenario for the former Trojans wideout. During consecutive road trips to Notre Dame and Colorado, family and friends stayed by his wife’s side while Colbert crossed his fingers, thousands of miles away, hoping the timing would allow him to be there.

But Colbert’s son wasn’t born during either road trip. Nor was he born the week after — as Colbert and his wife had hoped — when USC was home to play Oregon. As they waited, the due date came and went.

“Of course,” Colbert said, “he had different plans.”

So doctors scheduled an induction the following Saturday, with USC on the road against Arizona State. It would be tight but, with an early kickoff, Colbert was confident he could get back in time.

He arrived that morning at the Phoenix Airport Marriott 15 minutes before USC’s staff meeting, and from there the day was a whirlwind. Two of his receivers would turn in career performances as Michael Pittman Jr. caught 13 passes and Amon-ra St. Brown racked up 173 yards receiving in a narrow win over Arizona State. All the while, Colbert tried to keep his mind on football.

When the team landed at LAX, shortly before 8 p.m., his son was still holding tight.

But as Colbert picked up his wife at home, football faded away for a brief few hours. By Sunday at noon, Khari was born.

“There’s no doubt that one will be a Trojan and a great wideout someday,” USC coach Clay Helton said.

The family spent the next few days together in the hospital, and Helton gave his receivers coach some time off.

“He told me if I was here [on Tuesday], I was fired,” Colbert said.

By Wednesday night, though, he was back on the practice field, coaching USC’s receivers, running on adrenaline to get through a sleepless week. The next day, his wife and son checked out of the hospital. By Friday, Colbert would be on the road again.

Such is the life of a college football coach. But with his wife and son now safely at home, Colbert could rest a little easier, at least.

If his new son would let him, that is.

After dislocating his kneecap and undergoing surgery in fall camp, senior captain Jordan Iosefa was expected to return within a timeline of four to six weeks.

But that return date passed a couple of months ago, and Helton finally acknowledged Thursday that Iosefa wouldn’t return this season. The linebacker had a second surgery to address pain and swelling in his knee, Helton said.

Iosefa will redshirt this season, with plans to return next fall as a fifth-year senior.

“We want to get it exactly right,” Helton said. “The kid has one year to play, and we want everything to be right for him. We’re investing in him for the long haul.”

Running back Stephen Carr will return this week against Cal after sitting out the last two games with a hamstring injury. Vavae Malepeai, recovering from a knee injury and expected to rejoin USC’s backfield, will be a game-time decision, Helton said.

The same is true for wideout Tyler Vaughns, who was limited in practice all week. Helton admitted Thursday that Vaughns “didn’t look himself all the way,” as he continues to deal with an injured ankle.

Linebacker Palaie Gaoteote will miss the game Saturday with lingering injuries to his ankle and knee. It’s still unclear if Gaoteote will return this season.