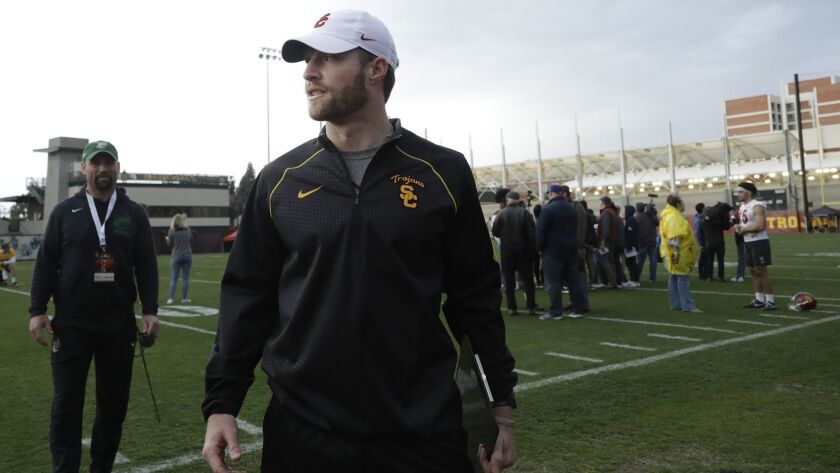 Baker, 29, will coach inside receivers and tight ends, a person familiar with the decision said. A former quarterback at Abilene Christian, Baker worked primarily with USC’s signal callers during his first season as a quality control analyst, aiding in the Trojans’ transition to the Air Raid offense.

USC did not have an inside receivers coach on its staff last season. Keary Colbert previously handled the Trojans’ receivers, while John Baxter worked with tight ends, along with his duties as special-teams coach. Baxter was fired after the bowl game, following a season in which those tight ends contributed just 15 total catches.

Baker’s promotion comes a month after Harrell signed a multiyear extension that made him one of the Pac-12’s highest-paid assistants. As Harrell decided between staying at USC and taking the same job at Texas, where he was offered a more lucrative, long-term deal to return to his home state, he consulted with Baker, whom he considers one of his closest friends.

The presence of his close confidant as a full-time member of the staff could potentially play a small part in convincing Harrell to spurn any other opportunities that might still arise. Though, it’s widely believed that Baker would follow Harrell wherever he coaches.

With Harrell’s mentor, Mike Leach, leaving Washington State to coach at Mississippi State, it’s not hard to connect the dots between Harrell and the sudden head coaching vacancy in Pullman.

Last month, after signing his extension, Harrell explained that his family was thrilled with their life in Los Angeles. At USC, with the trust of coach Clay Helton, he also had the autonomy to run his Air Raid offense.

It certainly can’t hurt that USC was willing to promote one of his closest coach friends, either.

“This is just too good of a place,” Harrell said last month. “At the end of the day, I want to win a national championship. Of all the opportunities I had to do that, this is the best opportunity.”