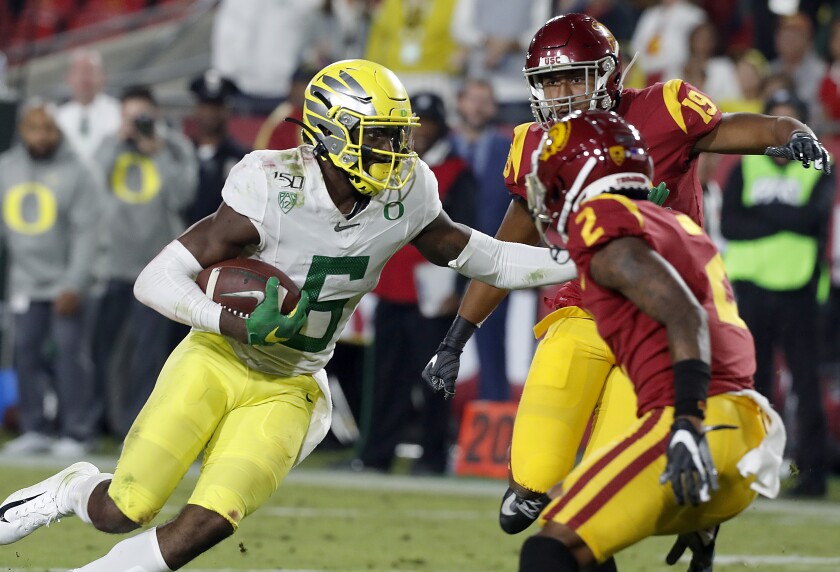 Through this harrowingly uneven season, as a torn ACL gave way to an unknown freshman quarterback, as a statement over Stanford turned to peril in Provo then unexpected ecstasy against Utah, as his road woes returned and his offense fought through growing pains and his defense was decimated by injury, Clay Helton talked often about the power of destiny.

As USC (5-4, 4-2) clung tightly to its tiebreaker atop the conference, Helton held desperately to that notion. Destiny was still in their hands. The Pac-12 was still in play. All the Trojans and their embattled coach had to do was hold on.

Then, on a November night at the Coliseum, in a clash with the class of the conference, that destiny faced its stiffest test yet, and USC lost its grip, fumbling away its Pac-12 fate in an 56-24 loss to No. 7 Oregon. With three games left in the season and Utah now ahead in the South division, the destiny USC once clung to now felt like a far-flung dream.

Its grip on the South had been tenuous to begin with. But over a sloppy second quarter when Oregon scored four touchdowns, those hopes took a literal tumble to the turf.

USC was still leading, 10-7, when Kedon Slovis tried to scramble away from a descending Oregon rush, only three yards from the end zone. He cocked back his arm to throw, but as his right arm flung forward, the ball didn’t join it.

The fumble set off a sequence for the Trojans that would surely serve as nightmare fuel for weeks to come. As a golden opportunity went wasted, the Ducks drove 92 yards down the field, took the lead, and never returned it.

What began with a dynamic first quarter for USC’s freshman quarterback took a sharp turn into territory he hoped was behind him. Just an hour earlier, he’d taken off scrambling in the pocket, spinning left, then right, evading Oregon defenders until Drake London came open for an impressively improvised touchdown pass.

But with his fumble, the turnover issues that Slovis had kept at bay in recent weeks reared their head. Just two plays into USC’s next drive, Slovis threw to the sideline, unaware of the Ducks corner about to jump the route.

His pass was picked off, and 32 yards later, Brady Breeze’s interception wound up in the opposite end zone.

“You can’t commit turnovers like that,” Slovis said. “But sometimes, it happens. You just have to move on.”

But USC never managed to move past its early mistakes. Slovis, who had thrown into just one interception over the past month, had two more picked off in the second half.

USC committed eight penalties for 92 yards, crippling its own drives and extending Oregon’s. Its defense gave up nearly as many points (56) as Oregon’s offense had plays (63). And on third down, the Trojans didn’t manage a single stop after the first quarter.

“You can’t turn it over four times and have the penalties we had and play that not clean of a football game and expect to beat that team,” Helton said. “Not our night.”

It was a particularly devastating result for Helton, whose job security is sure to be in question over the season’s remaining three weeks. A day after USC zeroed in on the athletic director who will soon decide his fate, Helton found himself defending his job from the post-game dais.

“I’ll fight like hell with the people I believe in, with these people I love, until they ask me not to do it anymore,” he promised.

As USC fell further behind, with its backfield still depleted by injury, Helton had no choice but to turn again to Slovis, who set a school record with 57 pass attempts on Saturday. But it was Slovis’ four turnovers, his most yet at USC, that ultimately loomed largest. He finished with 264 yards and two touchdowns, while completing a season-low 56 percent of his passes.

For another drive, though, Slovis and the Trojans still held onto hope. A nine-play, 74-yard drive before the half kept faith alive at the Coliseum, where the Trojans had yet to lose this season.

With just 20 seconds remaining, USC kicked off to Oregon, down 21-17 and ready to regroup in the locker room. But the momentum built over its only scoring drive of the second quarter was squandered in an instant when Oregon return man Mykael Wright took the kick back 100 yards without a USC defender near him.

The rout was on from there.

USC did its best to limit Oregon quarterback Justin Herbert, turning up the pressure early. But the future top draft pick diced up the Trojans, at one point completing 20 of 21 passes. After he threw his third touchdown of the second half, the Ducks brought in their backup.

By then, after weeks of holding on to hope, destiny had turned its back on the Trojans.

The question now, with three weeks left in USC’s season, is whether its coach will soon face the same fate.

“Whatever is written is already written,” Helton said, the frustration clear in his voice. ”God already has that plan. Until then, I’m gonna dang fight and help them try to win the Pac-12 South.”

*Speaking at halftime of a game in which penalties accounted for 249 yards, Pac-12 commissioner Larry Scott didn’t do much to defend his conference’s officiating, outside of assuring protocol was being followed. “I can tell you,” Scott said, “there’s a significant number of mistakes every week.”

*Helton defended USC’s choice late in the second quarter to kick deep to Oregon’s Wright, who returned the kick for a devastating score. “He kicked a good ball,” Helton said of Alex Stadthaus, “We just didn’t get it down.”

*Safety Isaiah Pola-Mao was ejected for targeting in the second quarter, leaving USC without both of its starting safeties for the rest of the game.

*Freshman wideout Kyle Ford took his first catch of the season for a 20-yard touchdown in the fourth quarter. Ford is still expected to redshirt this season.