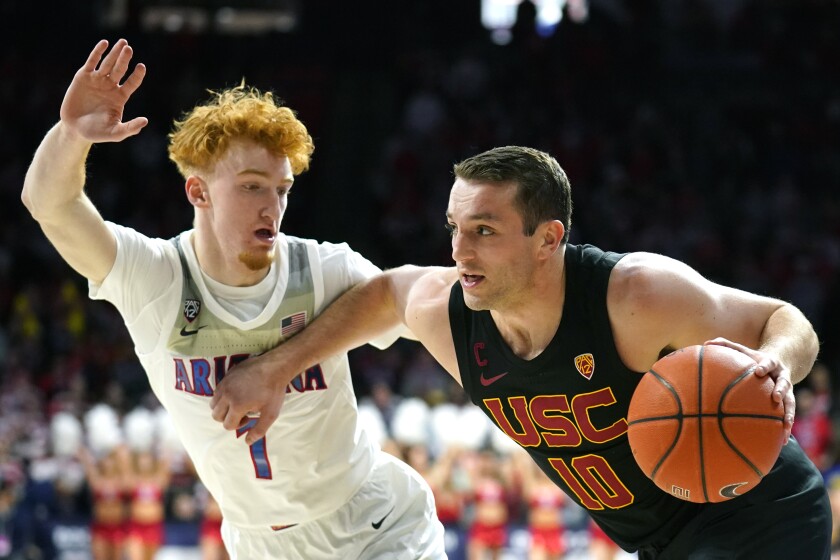 USC makes late push against No. 23 Arizona, but falls short in Tucson

Nico Mannion scored 20 points, Zeke Nnaji and Josh Green each added 18 and No. 23 Arizona held on for an 85-80 win over USC on Thursday night.

The Wildcats led by as many as 20 during the second half, pushing to a 63-43 advantage with 12:55 remaining. USC slowly chipped away and pulled within 83-80 with five seconds left on a 3-pointer by Jonah Mathews, but Mannion responded with a pair of free throws to stop the rally.

Two of USC’s usual starters — Mathews and forward Nick Rakocevic — didn’t start the game because of what the school called a “violation of team rules.” They both checked in at the first timeout with 13:37 left in the first half with USC trailing 12-9.

Their presence on the court didn’t help much. Arizona led 43-33 at halftime and was led by Green’s 12 points, including three impressive dunks. USC was led by Okongwu’s 13 points before the break.

USC: The Trojans have hit a small skid with two straight lopsided losses in conference play. It’s still a physical team that could finish near the top of the Pac-12 and should be helped by playing five of its next eight games at home.

Arizona: The Wildcats are building momentum as the regular season hits its final four weeks. Green, Mannion and Nnaji are playing like veterans and the team’s role players are providing great all-around minutes. The win was also the 400th of coach Sean Miller’s career.