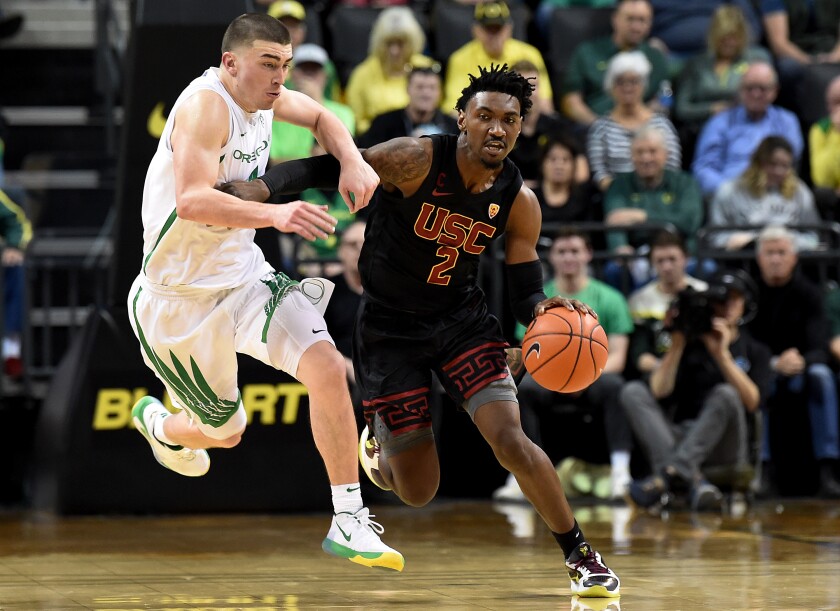 They could have had first place in the Pac-12 Conference all to themselves.

An offensive rebound there for the taking got away.

They could have almost assured themselves of being nationally ranked for the first time this season.

An inbounds pass thrown too close to a defender was tipped for a steal.

They could have notched the sort of victory that would have not just helped their NCAA tournament cause but significantly boosted their seeding come March.

A three-pointer that could have put them back ahead bounced off the front of the rim.

Regrets? The USC Trojans had a few after they wasted another massive comeback in the final minutes of a 79-70 loss to No. 12 Oregon in double overtime Thursday night at Matthew Knight Arena.

“We were right there and we lost,” USC coach Andy Enfield said. “It hurts when you lose a game and have a chance.”

A four-point lead with less than 1½ minutes to play in regulation disappeared just like the Trojans’ hold on a share of first place in the conference standings. It was the sort of setback that can either galvanize a team after it assesses and corrects its mistakes or send it spiraling into further despair.

The Trojans (15-4, 4-2 in the Pac-12) will find out which way they’re headed Saturday afternoon when they face Oregon State (12-7, 2-5) at Gill Coliseum. The Beavers are coming off an equally disheartening loss to UCLA and need a win at home over USC to sustain their chances of being considered for the NCAA tournament.

USC can bid farewell to its hopes of being nationally ranked after failing to notch a statement victory. The Trojans’ defeat, which dropped them into a tie with Colorado for third place in the conference, said plenty: They’re just not ready to match an elite team in the final minutes of a taut game.

“In a close game,” Enfield said, “it’s about which team makes those plays. It hurts a little bit because you’re right there.”

Give USC credit for going on a 17-2 run that put it ahead by four points when Jonah Mathews buried a three-pointer with 1:24 left in regulation. But then the Trojans got swept away like rainwater into the drain on a stormy night.

They gave up a driving layup to Oregon’s C.J. Walker, which was no big deal considering they got the ball back with 64 seconds left and could burn clock while ahead by two points.

But point guard Ethan Anderson’s running jumper off the backboard hit the back of the rim and rolled away. The ball bounced momentarily into the hands of teammate Onyeka Okongwu before he had it knocked away amid a scrum of bodies on the floor.

Oregon’s Payton Pritchard banked in a short jumper to tie the score with 26 seconds left. It was a full-on implosion when Mathews’ inbounds pass was tipped by Chris Duarte and stolen, giving the Ducks a chance to win before Okongwu blocked Will Richardson’s shot at the buzzer.

The teams traded points in overtime before the Ducks outscored the Trojans, 12-3, in the second overtime.

The takeaways were that it’s hard to win with 18 turnovers and 33% shooting. Nick Rakocevic and Anderson were a combined two of 13.

“On the road,” Enfield said, “you have to have a real team effort to beat a team like this.”

The Trojans didn’t quite get it, turning tantalizing possibilities into maddening reality.

TODAYVS. OREGON STATEWhen: 2 p.m.Where: Gill Coliseum, Corvallis, Ore.On the air: TV: Pac-12 Networks; Radio: 790.Update: Oregon State has lost three consecutive games after failing to score for long stretches against the Bruins. Beavers forward Tres Tinkle scored 17 points against UCLA but needed 14 shots to get there, making only four and doing the rest of his damage at the free-throw line. Tinkle has scored in double figures in 84 consecutive games, second in school history behind Mel Counts’ record of 89.