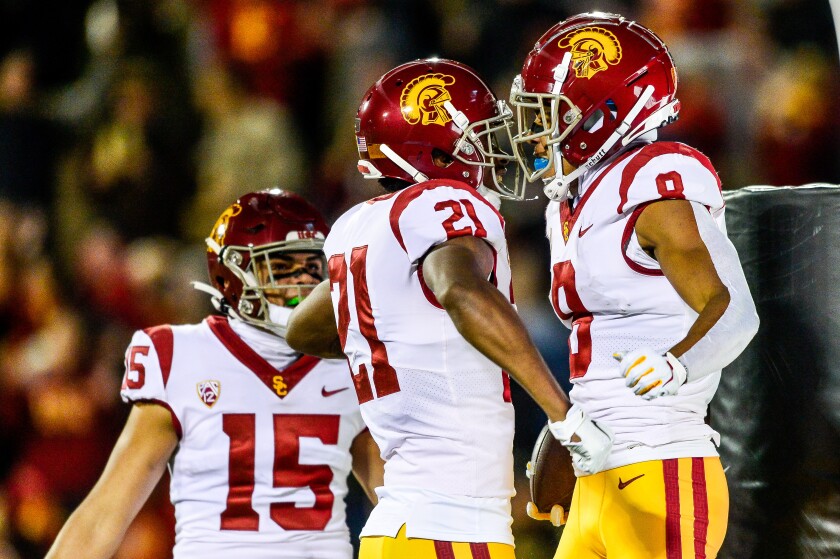 Their depth had disappeared. Their options had diminished. Still, a ragtag defense and a running back-less offense were barely enough for USC to redeem its road woes Friday and beat Pac-12 bottom feeder Colorado, 35-31.

The Buffaloes seemed like an easy mark. They had lost three in a row. They owned one of the Power 5’s worst defenses. They had never defeated the Trojans in 13 tries.

But on a brisk night at Folsom Field, that dream matchup drifted dangerously into nightmare territory, as USC wound up unexpectedly on its heels, the Pac-12 title hopes it still clung to slipping away into the mountain air. Its uneven offense, down three running backs, oscillated between explosive and implosive. Its depleted defense spent most of three quarters just trying to catch its breath.

There was little reason USC should find itself with a chance to win its first game on the road this season. But here was Michael Pittman Jr. streaking open across the middle of the field late in the fourth quarter, catching a crisp pass from Kedon Slovis in stride. Here he was flying through Colorado’s defense for the game-winning score, the senior receiver playing hero again with a 156-yard, two-touchdown performance.

For USC, it was both a courageous comeback conjured out of sheer will and a near-miracle drawn up out of desperation.

Nonetheless, destiny would be intact for one more day, no matter if USC seemed deserving or not. But on Friday, as the fourth quarter wore on and the Trojans rallied from a 10-point deficit, there was no denying the team’s fight.

Still, the escape was hardly satisfying. Though Helton focused solely on the positive in his postgame comments, there was plenty dismaying about a near-defeat to the Pac-12’s worst team.

USC (5-3, 4-1) put up 518 yards of offense, a season-high, but hardly looked the part, nearly giving away the game with a series of mistakes. Its defense seemed gassed from the start as Colorado skated across the field in the first half, dominating time of possession by nearly a full quarter throughout.

But as Helton and his players kept reminding, they still prevailed. They were still atop the Pac-12 South Division. It was the first time USC had rallied from a 10-point deficit since the 2017 Rose Bowl.

“Some problems, you have to go through,” linebacker John Houston said. “But we went through that in the second half, and we came back.”

A renewed defense laid the foundation for that comeback, after appearing exhausted early on. After a 71-yard touchdown sprint by Colorado wideout Laviska Shenault Jr. to open the second half, giving the Buffaloes a 24-14 lead, USC clamped down when it needed to.

That was especially true on third downs as Colorado converted just once in seven tries after converting four times in the first. It forced punts on four of Colorado’s final five drives.

But it was Slovis who put the struggling Trojans on his shoulders in the final quarter, finally pushing past Colorado.

On a blistering opening drive, he marched USC down the field on a scoring drive that took just three plays and 59 seconds. But for the next two hours or so, the freshman quarterback was erratic. He missed open targets and made his share of mistakes.

With its run game hampered and coaches unwilling to lean too much on electric freshman Kenan Christon, USC had put the onus for offense on Slovis, who was coming off one of his most inconsistent performances of the season.

Those hopes were put on hold until late, as the freshman led a gutsy, 12-play drive in the fourth quarter that drained the clock. On one key third down, Slovis took a huge hit just as he delivered a dart to Pittman to keep the drive alive.

“He’s got to believe in this guy on the sideline,” Helton said of the play, “and he lets go while he’s getting hit, steps right into it, and gets ear-holed, and delivers the ball on time, accurately, with unbelievable poise.”

But even on his final clutch drive, Slovis almost gave the game away on a sack, fumbling away a ball that Christon fortunately fell on. It was that kind of night for Slovis, who finished with 406 yards passing, his most yards yet, and four touchdowns, also a career high, but he also coughed the ball up too often. He was charged with two fumbles and an interception but had a number of other close calls.

The Trojans mitigated those mistakes, but they were often drive killers, forcing the defense back onto the field. USC had six drives of four plays or fewer, leaving an exhausted defense to deal with Colorado quarterback Steven Montez, who, until late, had his way with USC’s secondary.

That secondary returned two of its top corners Friday but couldn’t find an answer for Shenault, who racked up a game-high 172 yards.

In all, the Trojans allowed 324 yards through the air and 45 on the ground to Montez, who over his last two games had thrown six passes that were intercepted to go with zero scores.

At halftime, Helton gathered his team, knowing they needed to turn the tide before the night was over, if they had any hope of hanging on in the Pac-12 race.

“Keep fighting,” he told them. “Take a deep breath, be poised, and you’ll walk away winners.”

As its depleted defense caught its breath in the second half, and its erratic offense found its poise, USC would walk away with a road win in hand.

As for any other details, well ... perhaps its best to take a deep breath and forget.