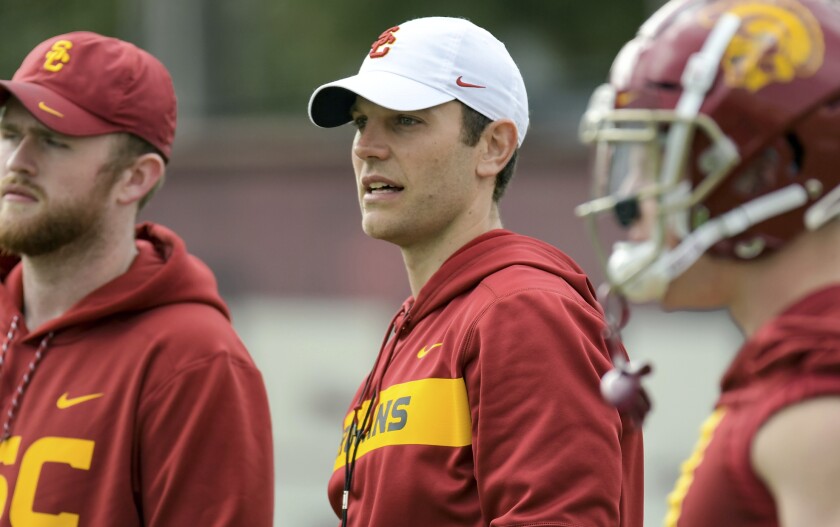 The coveted coordinator responsible for transforming the USC offense in his debut season will remain a fixture with the Trojans for the foreseeable future.

Graham Harrell signed a multi-year contract extension to stay at USC, the school announced Monday, ending a week of uneasy speculation over whether the rising star coordinator might leave L.A. for Texas, where he’d interviewed for the same position.

“Excited to be a part of this great university and part of the Trojan family,” Harrell said in a video posted on Twitter. “It’s a really special place. We’ve built something really special here.”After making the controversial call to retain head coach Clay Helton earlier this month, USC moved swiftly to secure its offensive coordinator, offering Harrell a lucrative multi-year extension worth more than $1 million per year.

The offer, which The Times first reported Dec. 6, came soon after Harrell emerged as one of the most desired assistants on college football’s coaching carousel. A Texas native, Harrell interviewed for the Longhorns’ vacant coordinator position and was briefly discussed as a possible head coaching candidate at Nevada Las Vegas and Texas San Antonio.

But with Texas and its deep-pocketed program looming, USC made an offer convincing enough to keep Harrell at the helm of an offense that could be among the nation’s most talented next season. The school did not announce the official terms of his new deal, but the extension presumably places him among the highest-paid coordinators in the nation, not long after new athletic director Mike Bohn promised “a redoubled commitment” of resources for the football program, following the decision to keep Helton.

According to a 2019 USA Today database of assistant coach salaries, only one Pac-12 coordinator, Washington’s Jimmy Lake, reportedly made more than $1 million in 2019. Lake has since been promoted to replace Chris Petersen as the Huskies’ head coach.

By comparison, 12 SEC assistants boasted seven-figure salaries a season ago.

For USC, which is still mulling the future of several other assistants ahead of next week’s Holiday Bowl, it was a price tag worth paying after watching Harrell turn a stale USC offense into one of the nation’s most explosive aerial attacks.

Harrell was first hired last January at a moment of desperation, after Kliff Kingsbury, another disciple of Mike Leach’s Air Raid offense, spurned the Trojans after just one month to be head coach of the NFL’s Arizona Cardinals. Harrell stepped into his place soon after, following three successful seasons at North Texas, and his hiring would pay huge dividends for a program desperate for progress on that side of the ball.

That progress was evident through just one season, as Harrell oversaw the transformation of one of the Pac-12’s most paltry offenses into a high-flying Air Raid attack that ranked among the most explosive in college football. The Trojans improved from 91st to 36th in scoring offense and from 84th to 18th in total offense.

In spite of losing its starting quarterback, JT Daniels, in the season opener, USC’s passing attack was nothing short of prolific in 2019, ranking fifth in the nation in passing yards, largely thanks to the unexpected rise of freshman Kedon Slovis. Slovis, who arrived at USC as an overlooked three-star recruit, emerged as one of the best young passers in college football under Harrell’s tutelage. As a freshman, he threw for 3,242 yards and 28 touchdowns, on his way to being named Pac-12 offensive freshman of the year.

His father, Max Slovis, told The Times two weeks ago that Harrell was one of “the single most influential people in Kedon’s growth.”

With Slovis set to return, along with most of USC’s playmakers, Harrell may have one of the nation’s most talented offenses at his disposal next season. That potential, for a rising star coordinator, was reason enough to return.

“Moving forward, we’ve laid the foundation to compete for championships, not only at the Pac-12 level, but at the national level,” Harrell said. “We’re excited to be here. Can’t wait to continue what we’ve started.”