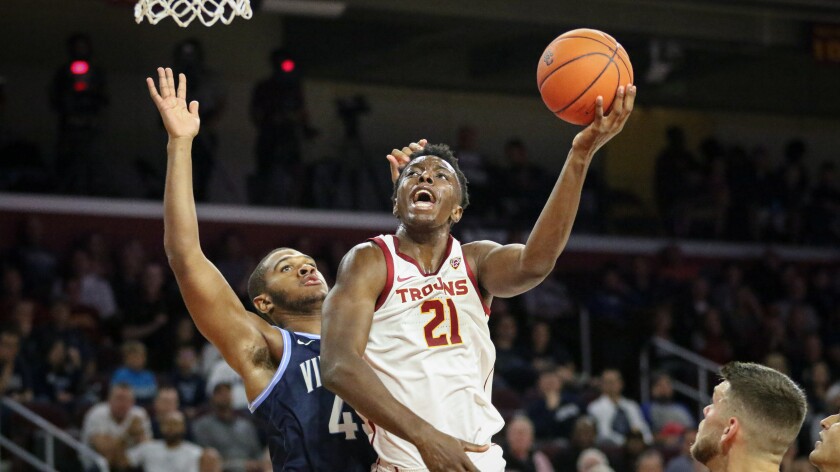 Tied early in the second half against a team that went 7-25 last season, USC shrank to the size of its opponent Friday. The plan worked.

The Trojans used a small, four-guard lineup to survive a second-half scare from Portland to win 76-65 at Galen Center, improving to 2-0 despite committing 20 turnovers and giving up 13 three-pointers.

Freshman forward Onyeka Okongwu led USC with 20 points and 10 rebounds in a foul-plagued 21 minutes, while senior guard Jonah Mathews reclaimed his starting role and buoyed the offense with 12 points, all from beyond the arc.

The Trojans, who made just three of 17 three-point attempts in their season-opening win Tuesday against Florida A&M, rebounded with 10-for-20 shooting from long range Friday. Coach Andy Enfield knew that with Mathews, who came off the bench in the opener because he was late to classes, and graduate transfers Quinton Adlesh and Daniel Utomi, this team could be one of the more dangerous shooting teams in the Pac-12. It was only a matter of time before it showed.

Adlesh’s 180 made three-pointers at Columbia rank fourth on the school’s all-time list. Yet he was 0 for 3 from beyond the arc in his USC debut. He made up for it Friday by hitting all three of his first-half three-point shots as he finished with nine points while contributing key defensive stops in the second half.

“He had a really controlled game,” Enfield said of Anderson. “He’s developing as a player, he has great court vision and he’s a tough kid. I thought he gave us a big jump off the bench.”

After becoming the first USC freshman since Taj Gibson in 2006 to debut with a double-double, Okongwu was limited by foul trouble Friday. He played just seven minutes in the first half with two fouls, earning six points and two rebounds.

“In our system, he plays a very important position for us and he does it very well,” Enfield said.

“So we just need him to keep playing within the system and using his talents to go get that ball when it’s on the backboard.”

When Okongwu left the court a final time with 31.7 seconds remaining and an 11-point lead, what was left from the crowd of 2,720 gave him a standing ovation as the Trojans marched toward their second victory.