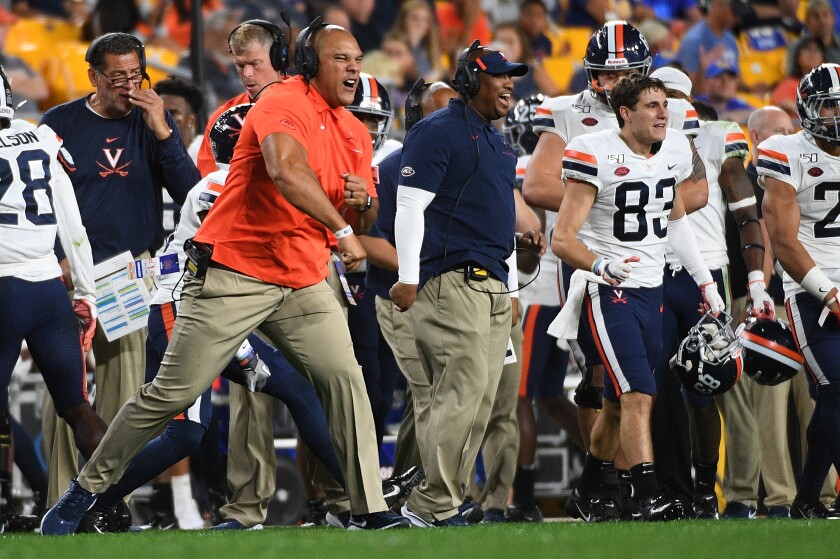 After hiring a new defensive coordinator, safeties coach and cornerbacks coach, as well as a new special teams coordinator, USC is working to finalize its staff of football assistants this week by hiring Virginia defensive line coach Vic So’oto, according to a person familiar with the decision.

So’oto, 32, has just three seasons of experience as a full-time assistant, all spent at Virginia. But while So’oto joins a revamped USC staff as its least experienced hire, the up-and-coming defensive line coach impressed during his short tenure in Charlottesville, helping oversee a Cavaliers defense that finished seventh in the nation in sacks last season.

An Oceanside native, So’oto checks plenty of other boxes for USC as well. He has experience coaching in a 3-4 scheme, which USC will use under new defensive coordinator Todd Orlando. So’oto spearheaded west coast recruiting at Virginia and, along with new cornerbacks coach Donte Williams, should help fortify the Trojans’ declining recruiting prowess in the Southland.

So’oto also happens to be the second cousin of the late Trojan great and Chargers linebacker Junior Seau — a connection which, in Southern California, should carry serious cache.

The cupboard certainly won’t be bare, as is, at USC. So’oto inherits a defensive line that already boasts one of the nation’s most exciting pass rushers in Drake Jackson, as well as an interior stocked with future NFL defensive tackles in Jay Tufele and Marlon Tuipulotu. Jackson finished with 11 1/2 tackles for loss and 5 1/2 sacks last season, while Tufele and Tuipulotu combined for 12 1/2 tackles for loss.

With all three set to start up front next season, expectations along the defensive line should be high.

Beyond that talented starting group, So’oto will be tasked with developing depth along a defensive line that grew especially thin last season, when Jackson and Christian Rector missed time due to injury. USC signed three defensive tackles in its most recent recruiting class, but with both Tufele and Tuipulotu potentially leaving after next season, So’oto may have to build depth in a hurry.

He joins a defensive staff entirely rebuilt over the past six weeks, after defensive coordinator Clancy Pendergast was fired in the wake of USC’s embarrassing defeat in the Holiday Bowl. Orlando was hired last month to replace him as coordinator, and soon after, USC fired its three remaining assistants from last season’s defensive staff.

Safeties coach Craig Naivar, who worked alongside Orlando at Texas and Houston, was the only assistant hired with ties to the Trojans’ new defensive coordinator.

The program is still expected to add more support staff positions to focus on fortifying recruiting.