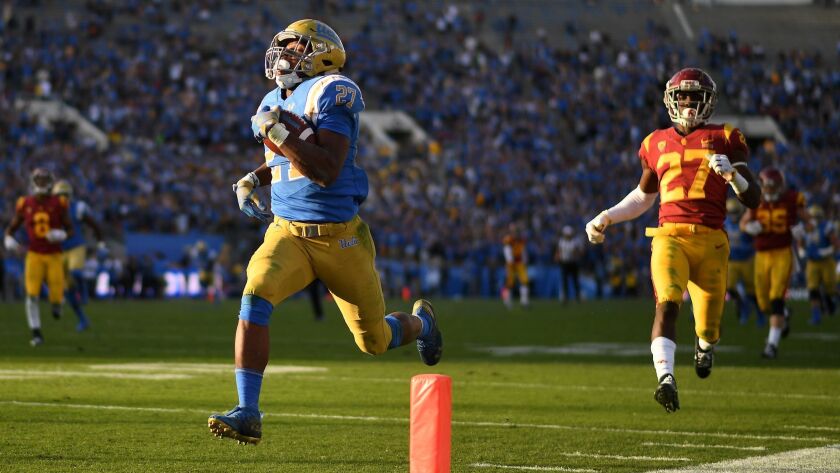 USC vs. UCLA: A look at how the teams match up

UCLA running back Joshua Kelley vs. USC’s run defense. The Trojans have not forgotten the damage Kelley did last season, when he steamrolled their defense for career-high 289 rushing yards. USC has had its share of issues against the run again this season, while Kelley remains UCLA’s most effective offensive weapon. “Stop the run,” USC linebacker John Houston said. “That’s our big mind-set for the day.”

UCLA (392.7 ypg/26.7 ppg): Moving the ball hasn’t been an issue for the Bruins; holding onto it has been. Quarterback Dorian Thompson-Robinson committed four of his team’s five turnovers last week against Utah and has been responsible for 17 of its 20 turnovers on the season. UCLA won’t be able to generate the points it needs to win if it loses another game of keep away.

USC (445.7 ypg, 31.5 ppg): As he wraps up his unexpected freshman season, quarterback Kedon Slovis is on a tear. Slovis has thrown for 400 yards and four touchdowns in three of his last four games, and this week, he’ll match up with a pass defense that ranks among the worst in the Pac-12. The return of leading rusher Vavae Malepeai could bring more balance on offense, but more than likely, it’ll be up to Slovis to establish a rhythm.

UCLA (442.0 ypg/33.7 ppg): The Bruins reverted to some of their bad habits against Utah, missing tackles and struggling to cover receivers. To have any chance against the Trojans, they must disrupt Slovis and receive strong efforts from their defensive backs while covering what may feel like an NFL-caliber receiving corps.

USC (403.8 ypg, 27.1 ppg): USC’s plight against dual-threat passers has been a sore subject all season, and this week, it’ll face another capable scrambler. Keeping Thompson-Robinson contained will be crucial, as will limiting space for Kelley to break open plays on the perimeter. The Trojans have been inconsistent on defense, but consecutive encouraging performances have them as confident as they’ve been all season on that end.

The Aussies will rule in the punting game when countrymen Wade Lees of UCLA and Ben Griffiths of USC both try to have a g’day. Lees said he’s gone to lunch and the beach with his friend since arriving in Westwood. “He’s a beast,” Lees said of Griffiths. “He’s 6-6, 245. He could be a tight end, for sure. He’s an animal.”

The Bruins need two wins to be bowl eligible. The Trojans, who have won 15 of their last 20 in the rivalry, have a chance of sneaking into the Pac-12 title game with a win and a Utah loss sometime over the next two weeks. That desperation favors USC, which is aiming to win at least five of its last six games for the third time in four years.

UCLA defensive lineman Elijah Wade (unspecified injury) and linebacker Bo Calvert (NCAA suspension) are out and safety Quentin Lake (wrist) is unlikely to play. ... USC will likely get back Malepeai (ankle), as well as wideout Tyler Vaughns (ankle), who was limited a week ago. But linebacker Palaie Gaoteote IV (ankle, knee) remains “a longshot” to play and safety Chase Williams is out with a foot sprain.