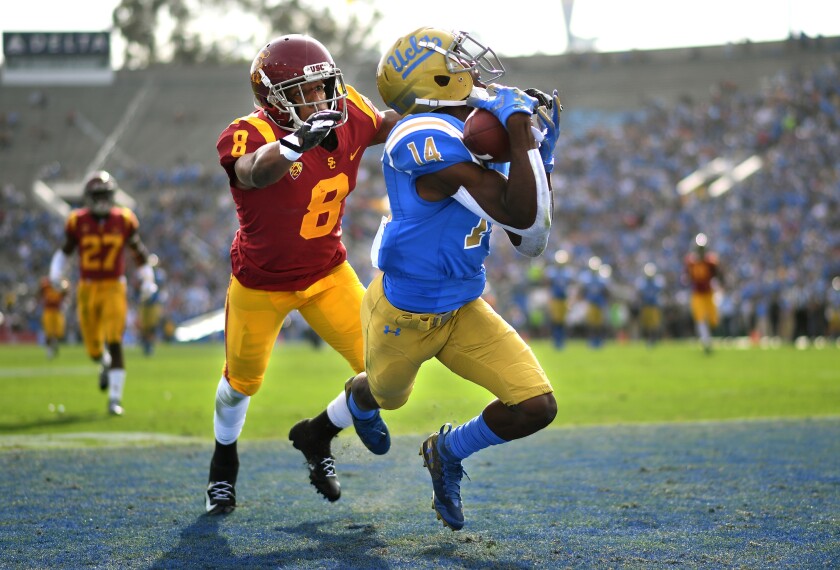 USC vs. UCLA: What the fans have to say about the rivalry

USC and UCLA will meet for the 89th time this Saturday at the Coliseum. This football rivalry, known as the “Crosstown Rivalry” or “Battle for LA”, is among the more unusual within collegiate sports dating back to 1929. The campuses are only 12 miles apart and are located in Los Angeles. Both schools compete for the Victory Bell, which is painted either red or blue depending on the outcome of the game.

The game has had Rose Bowl, conference or division championships on the line. Before the Pac-10 expanded to the Pac-12 in 2011, the Rose Bowl and conference championship were on the line for both teams 20 times and at least for one team 37 times. Following conference expansion and the creation of the football divisions with UCLA and USC being in the South Division, the division title and a berth in the Pac-12 Championship game has been on the line for at least one team twice. As of the 2018 season, USC leads the all-time series with 47-32-7 (USC forfeited two wins due to NCAA sanctions).

1967..Beaban vs the double murderer. One of the top 5 games in College FB history. Honorable....1969..Jimmy Jones to Sam Dickerson in the dark corner of the end zone for the win.

Means everything, and has morphed for me over the years. I got my BS from USC, my MS from UCLA. Meant which t-shirt I could wear at the least. 😉 Always a Trojan, but more involved as a Bruin alum. Could go on for hours about it. #FightOn #GoBruins

Lost a good friend in 1996 because he said, “Turnovers had nothing to do with us winning.” My response, “🤬 you and Skip Hicks!”

I didn't want to play for Larry Smith so ended up at UCLA. When I was in school, Dad would call me Monday of the SC week and say, "You ready for that Trojan ass whoopin'?". I've been to 25+ SC/UCLA games and I miss him terribly on game day.

Between my brothers, my parents and myself we hold a total of 7 degrees from UCLA. The spirit of the rivalry is a tradition that bonds us.

It means my paycheck battles it out with my alma mater. No more- no less.

Shaped my future with a single punt a single win. 13-9. Greatest on field victory I have ever experienced.

Only time I ever heard my late Grandmother, Jane, cuss. And I quote “Those cheating fucking bastards”. Also, in November of 1994 the invitations had gone out for our wedding when I realized the ceremony was during the game. Changed it to a night wedding. #8Clap