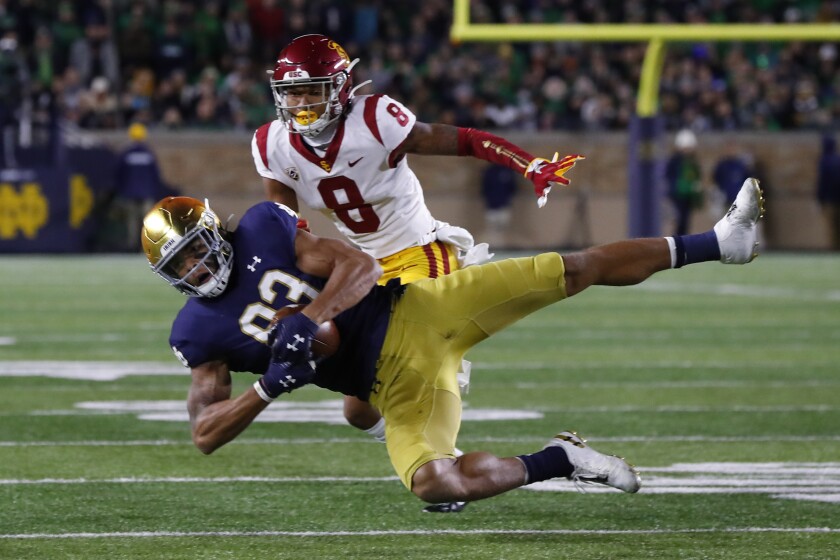 USC will turn to inexperienced players to help depleted secondary

The three hobbled cornerbacks stood along the sideline, wearing jerseys but no pads, their presence together a stark reminder of just how much USC’s secondary could be missing on Saturday.

On Wednesday, Isaac Taylor-Stuart wore a boot over his high ankle sprain. Olaijah Griffin, after missing practice Tuesday’s practice, was still dealing with lower back issues. Neither player has officially been ruled out, unlike injured starting nickel Greg Johnson, but hopes of either playing against Arizona continue to dwindle.

With one of the Pac-12’s leading passing attacks on deck, USC will probably have to confront the daunting prospect of playing without all three of its starting cornerbacks.

Defensive coordinator Clancy Pendergast suggested contingency plans are still being sorted, as a collection of young, inexperienced corners continue to jostle for positioning on the depth chart.

Freshman Chris Steele, who has played in six games and started two, will fill one starting spot. But snaps opposite Steele, as well as in the slot, are still available, and that opportunity was not lost on the unproven corners looking to fill them .

Of those three, only Williams has played defensive snaps in a collegiate game. But on Wednesday, it was Hewitt who most often practiced opposite of Steele with the first-team defense.

Hewitt, a freshman, arrived at USC this fall as a safety, but changed positions at the start of the season and has slowly been climbing the depth chart at corner. His speed was what first caught the eye of coaches as they searched for a safety on the recruiting trail.

“When he got here, not only was he fast, he could do more stuff,” defensive backs coach Greg Burns said. “There are more tools that we didn’t see.”

Those tools will certainly be put to the test when Arizona quarterback Khalil Tate comes to the Coliseum armed with a more efficient passing game than he’s had in years past. Tate is completing 64% of his passes this season, a career high, while still averaging 8.8 yards per attempt.

Couple that new efficiency with his well-established threat as a scrambler — 233 yards and two touchdowns this season — and Tate could prove to be one of the most dangerous players USC’s defense faces this season.

“He can run a 4.4,” freshman corner Max Williams said. “He can throw the ball 75 yards. Any time you have a guy like that, it’s going to be a struggle.”

Williams will likely step into the nickel spot vacated by Johnson, whose shoulder could keep him out for the foreseeable future. Williams impressed coaches in the fall, but struggled to shake a hamstring injury early on after recovering from a torn anterior cruicate ligament in his senior season at Serra High.

He’s worked at both inside and outside corner, but his 5-foot-9 frame and skill set suggest he’s likely to shift inside for the time being.

“He’s very instinctive,” Pendergast said. “He’s a guy who if you tell him something once, he gets it.”

The learning curve for USC’s young secondary hasn’t been nearly as steep as some expected as Griffin, Taylor-Stuart and Steele have all flashed the potential that made them five-star prospects.

Without them, as the Trojans scrape the bottom of their depth chart for cornerback help, Burns insisted he still isn’t concerned about his secondary’s inexperience.

“It is what it is,” Burns said. “You can’t worry about it. I have to play who I have. But the cool part is this group has always been locked in.”