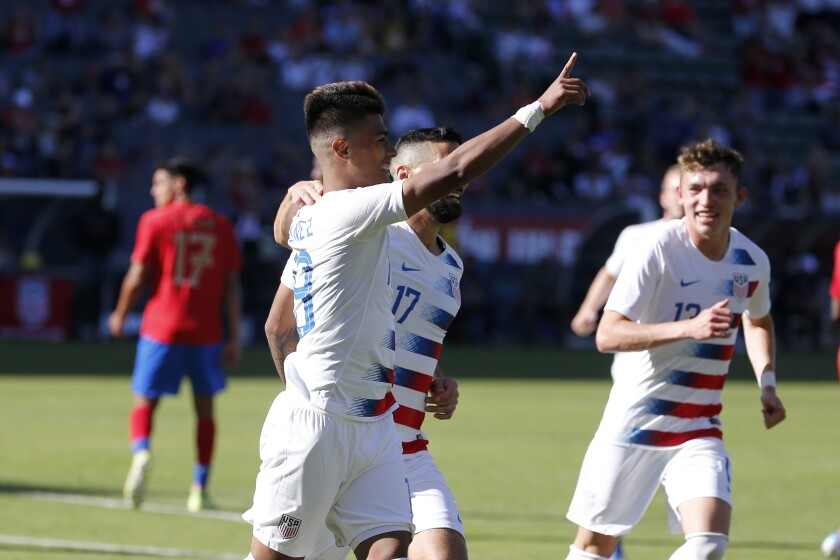 Ulysses Llanez scored in his U.S. national team debut near his hometown, and a young American roster opened 2020 with a 1-0 exhibition victory over Costa Rica on Saturday at Dignity Health Sports Park in Carson.

Llanez, an 18-year-old native of nearby Lynwood, buried a penalty kick in the corner in the 50th minute, slotting the ball to the left of goalkeeper Esteban Alvarado, who dove the other way.

Llanez celebrated by miming a fallaway jump shot in a tribute to retired Lakers superstar Kobe Bryant, who died in a helicopter crash along with eight others Sunday.

Even before Llanez’s goal celebration, both teams honored Bryant. Costa Rica posed for its pregame team photo while holding a No. 24 Ticos jersey, while the U.S. supporters broke out in cheers and chants of “Kobe! Kobe!” when 24:00 came up on the scoreboard.

Bryant supported AC Milan while growing up in Italy, and he later backed Barcelona.

All the debuting players except Gaspar are eligible for the CONCACAF Olympic qualifying tournament, a competition limited to players under 23. The U.S. opens against Costa Rica on March 20, and this early-year experience could speed the laborious process of building chemistry among the youngsters before they fight for a trip to Japan.

Overall, coach Gregg Berhalter’s lineup averaged 23 years 216 days and was the American team’s youngest ever for the exhibition matches that follow their annual January camp.

Llanez is a former Galaxy prospect now playing in Germany for Wolfsburg’s youth team. After getting invited to the team’s January camp and impressing his coaches, Llanez became the 54th player to score in his U.S. debut.

Llanez’s penalty was awarded when substitute Randall Leal brought down Reggie Cannon on a run deep into the box following a pass from Paul Arriola.

Only two matches in U.S. history featured more debut starters than this exhibition on the Galaxy’s home field. The American team fielded five newcomers in a match against Canada in September 1992 and against Panama last June.

Ever since the U.S. missed out on the 2018 World Cup with a humiliating loss to Trinidad and Tobago in October 2017, the new coaching staffs have employed 81 players, including 43 making debuts.

Shortly after Llanez and Alvarado both walked away from a scary collision in the scoreless first half, Galaxy defender Giancarlo Gonzalez put a header off the crossbar for Costa Rica in the 24th minute.

Gyasi Zardes put a header just over the goal line in the 86th minute but was ruled offside.