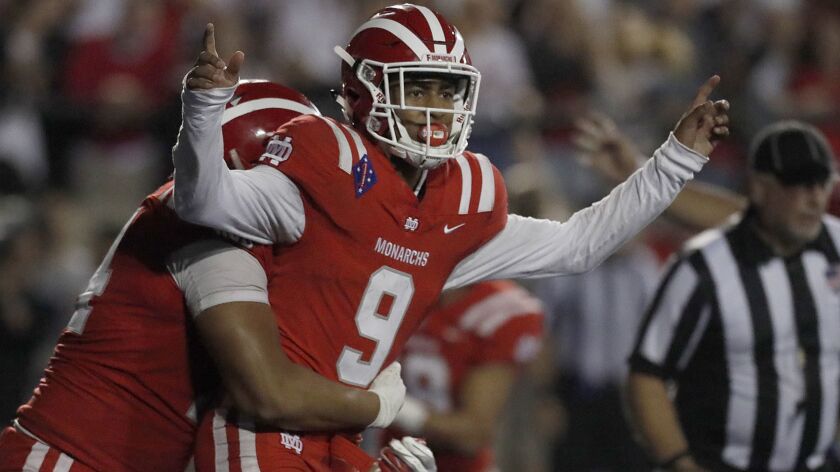 Santa Ana Mater Dei (10-0), boasting a 17-game winning streak and seeking its third consecutive Southern Section Division 1 football championship, has been seeded No. 1 in the eight-team playoff bracket that was released on Sunday.

The usual 16-team Division 1 bracket was reduced to eight teams in an effort to make Division 1 and Division 2 more competitive. Mater Dei’s advantage is having perhaps the hottest quarterback in the nation in Bryce Young, who was 17-of-17 passing last week against JSerra for 353 yards and five touchdowns. He is completing an astounding 73.8% of his passes.

“He’s so good,” Servite coach Troy Thomas said of Young, who has committed to Alabama.

Chatsworth Sierra Canyon (9-1) was seeded No. 1 in a balanced Division 2 bracket and will host Santa Margarita on Friday. Several teams that have been stuck playing St. John Bosco and Centennial in playoff and regular-season games get relief in Division 2, including Norco, West Hills Chaminade and Gardena Serra. No. 2 San Clemente (8-2) travels to play Valencia. No. 3 Norco (8-2) plays host to Chaminade. No. 4 Rancho Cucamonga (7-3) plays host to Murrieta Valley.

All Division 1 and 2 teams have been guaranteed playoff spots for months. The same can’t be said for others who had to seek at-large spots in divisions that had few, or even none, available. Santa Clarita Golden Valley (8-2) finished in a tie for second place in the Foothill League but lost out to 5-5 Rancho Cucamonga Los Osos for the lone Division 6 at-large playoff berth. Canyon Country Canyon (2-8) finished last in the Foothill League but made the Division 7 playoffs because there were more at-large berths.

The Southern Section uses competitive equity in putting together its playoff divisions and must see how many schools qualify with automatic berths before learning how many at-large spots are available.

First-round action for Divisions 2 through 14 takes place on Friday. Championships are Nov. 29-30. Cerritos College will be the site for the Division 1 final.