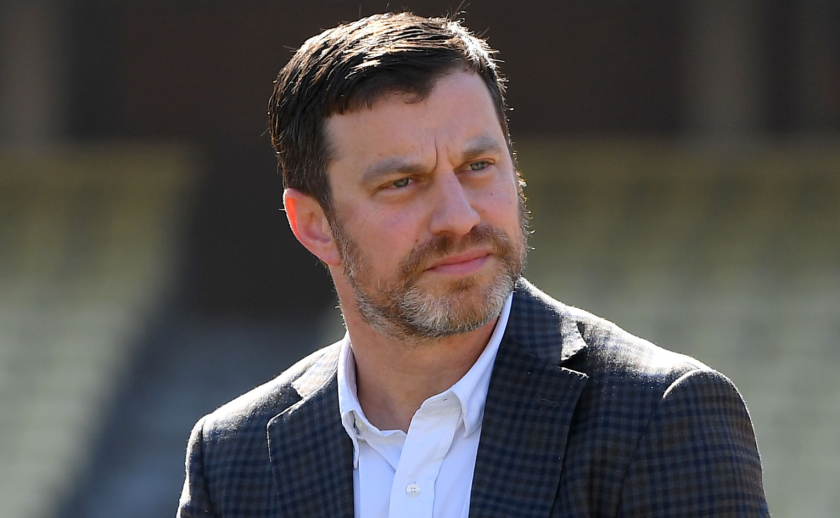 Less than a week before the Dodgers reconvene for spring training 2.0, president of baseball operations Andrew Friedman said members of the organization have tested positive for COVID-19 but declined to specify the number or place within the franchise.

Friedman did, however, acknowledge that at least one player tested positive. He added he is unsure if positive tests by any players will prevent them from joining the team for the start of training at Dodger Stadium. He said none of the cases “have resulted in symptoms that have been problematic.” Players will report July 1. Friedman said the club’s first official workout is scheduled for July 3.

“I think there’s no question we’re going to have a lot of positive tests in spring training and during the season,” Friedman said in a conference call Thursday. “To me, it’s much more about how quick we are to respond to that, the treatment options, the quarantining part of it, making sure it doesn’t spread among the group.

“And to the extent that we can contain it, and we have really good health and safety protocols in place, I think it’s something that collectively, as a group, we can manage. But anyone who pretends they can sit here today and tell exactly how things are going to play out, I don’t subscribe to that, I don’t agree with it.”

Andrew Friedman and Dave Roberts agree the Dodgers’ depth should be just as important in a 60-game sprint as during a traditional 162-game marathon.

The Dodgers join a growing list of organizations that have acknowledged positive cases in recent days, including the Angels, Philadelphia Phillies, Toronto Blue Jays, and Colorado Rockies. USA Today reported at least 40 players and staff members have tested positive for the novel coronavirus. The wave prompted MLB to order clubs to shut down their spring training facilities in Florida and Arizona, states that have experienced a recent swell in COVID-19 hospitalizations.

The surge serves as a reminder of the challenge awaiting MLB to stage its 60-game season during a global pandemic after three months of tense negotiations over how to split hundreds of millions of dollars. The league and the players union agreed on a health and safety protocol that produced an operations manual of more than 100 pages. The document effectively orders every person involved in the league to change their behavior from the ground up with temperature checks conducted at least twice a day and COVID-19 tests administered every other day.

And yet, despite meticulous measures that include prohibiting spitting and high-fives, the experiment’s success ultimately will depend on participants self-policing. The operations manual states individuals must “ensure they all act responsibly” but it doesn’t include official restrictions on what players, coaches or anyone else involved are allowed to do away from stadiums.

“I think the strategy is being up-front and honest,” Dodgers manager Dave Roberts said. “From the outset, we’ve been very diligent about educating ourselves, keeping our guys as safe and educated and informed as possible.”

Roberts, a cancer survivor, said he was initially wary about managing during the pandemic, but doctors assured him he was not classified as high risk. Closer Kenley Jansen, who has had two procedures to correct an irregular heartbeat, and reliever Scott Alexander, a diabetic, are Dodgers players with medical histories that could render them high risk.

Friedman said “a few” players have expressed concerns about playing, but the concerns have not risen to the point of opting out of the season. Players deemed high risk by medical personnel can opt out and still receive their pay and service time. Other players would receive neither.

“For people who are concerned, we want to help with what is a really personal decision,” Friedman said. “We’ll learn more about this over the next week.”

As MLB teams prepare to play in 10-team regional divisions intended to limit exposure to the coronavirus, they must reckon with an alarming trend.

In the meantime, Friedman and his colleagues will also spend time making baseball decisions for unprecedented circumstances.

He said the club is finalizing a deal to hold its alternate training site — where up to 30 players can be stationed to work out during the season — at USC. He said he expects the site would be moved to the organization’s Class-A affiliate in Rancho Cucamonga should students return to campus for the fall semester.

And by Sunday, clubs must submit their first player pools. Teams are allowed up to 60 players, but Friedman said the club probably initially won’t approach that number. Instead, the team will add players the next several weeks — as long as they’re free of COVID-19.