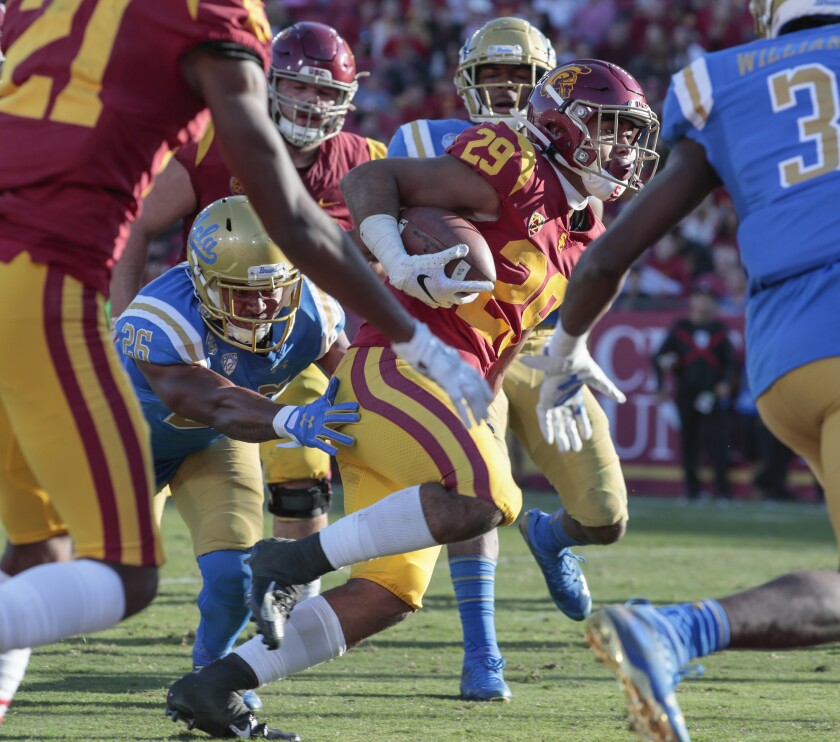 Vavae Malepeai spent the past five weeks watching from the sideline after knee surgery, wishing he could take the field with his teammates. The Trojans welcomed him back with open arms Saturday.

In his first game since undergoing surgery in October, the redshirt junior rushed for 60 yards and two touchdowns in10 carries as the Trojans took back the Victory Bell with a 52-35 win over UCLA at the Coliseum.

Malepeai had surgery after USC’s loss to Notre Dame to clean out swelling in his knee. He said he was cleared to return last week against California, but he told the training staff he didn’t feel ready. With the extra week to recover, he delivered a one-yard touchdown run in the first quarter that put the Trojans ahead and another eight-yard scamper in the third quarter that helped USC overcome the brief shock of seeing record-setting quarterback Kedon Slovis temporarily leave the game after taking a hard hit.

His return helped boost a running game that was once down to its fourth-string running back. Now the Trojans have Malepeai and junior Stephen Carr, who returned from a hamstring injury last week and led the Trojans on Saturday with 87 rushing yards in 11 carries and one touchdown.

“When you see Vae and Carr gets lots of yards after contact, it puts the defense in a bind, it really does,” USC offensive coordinator Graham Harrell said. “You have to make a decision: Are you going to load up that box and leave those guys vulnerable with four grown horses out there? Or are you going to empty the box and let Vae and Carr run wild? To have a healthy stable makes a huge difference.”

Freshman Kenan Christon, who rose to the starting role with injuries to the veterans, had two carries for nine yards.

USC rushed for more than 100 yards as a team for the first time since Oct. 25 against Colorado, but barely needed the ground production with Slovis breaking the USC record for passing yards in a game with 515. He left the game briefly after suffering whiplash on a hit in the third quarter, but returned on the next drive after getting checked out by trainers.

“Everybody did their thing tonight,” Malepeai said. “Blocking was great. Run game was tight. Kedon had time to throw and made the throws. It was a great team effort.”

It began with an innocuous penalty for running into the punter, one that led to an opening UCLA scoring drive. It continued with an unfortunate timeout, used to keep USC from kicking a field goal with only 10 men on the field.

Then, Amon-ra St. Brown muffed a punt in that same quarter, and USC again found itself backed into a familiar corner, where its special teams mistakes threatened to upend everything else that was special about its performance.

The Bruins ultimately gave the ball back soon after St. Brown’s fumble, as Isaac Taylor-Stuart nabbed an interception three plays later. But the issues, even in a victory, were impossible to ignore.

Even if Clay Helton is retained, it’s possible he could take a long, hard look at the direction of USC’s special teams units under John Baxter.

Earlier this season, Helton reiterated his confidence in Baxter. How he feels now, after weeks and weeks of the same issues, remains to be seen.

On the day in which USC honored perhaps the most dominant safety in school history, an ascending Trojan sophomore at the position had perhaps his best game yet.

Talanoa Hufanga said his chance to meet Hall of Fame safety Troy Polamalu was a “dream come true.” Polamalu was honored at the game for his induction into the College Football Hall of Fame.

Hufanga followed that meeting by racking up more tackles than anyone else since 2001, when Polamalu was roaming the Trojans secondary in similar fashion.

The USC sophomore finished with 18 tackles, a career high.

“Just a phenomenal performance by [No.] 15,” Helton said.