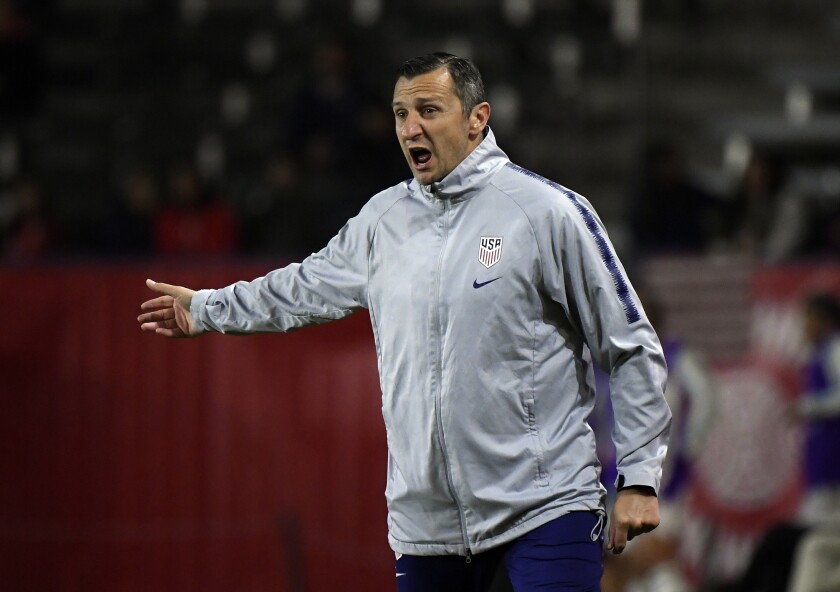 Vlatko Andonovski was asked Sunday to describe the style he has tried to teach seven games into his stay as coach of the U.S. women’s national soccer team. He didn’t need to go beyond the first letter of the alphabet to answer.

“If I have to describe it in three words it would be attractive, attacking and aggressive,” he said.

Dominant also works. So does invincible, relentless and unrivaled. In fact, pick any superlative and it probably fits.

But what the U.S. is not is finished because even after overwhelming Canada 3-0 in the final of the CONCACAF Olympic qualifying tournament at Dignity Health Sports Park, the coach said the team has yet to match his vision.

“I don’t think we’ve achieved it,” he said. “You can see moments; in some games more, some games less. We’re definitely moving in the right direction.

“[But] I think this team is just going to get better and better.”

That has to be a frightening prospect for the teams the U.S. will face in this summer’s Tokyo Games since the Americans are unbeaten under Andonovski, outscoring opponents 34-2 in the seven victories and posting shutouts in the last six.

But then Andonovski, hired away from the NWSL in the fall to replace Jill Ellis, didn’t exactly inherit a reclamation project. Under Ellis, the winningest coach in U.S. history, the team won consecutive world championships and was ranked No. 1 in the world. Andonovski has made only minor changes to the roster.

However, one addition he made is already paying huge dividends, with forward Lynn Williams, little used under Ellis, scoring the first goal and assisting on the other two Sunday.

“It’s like a fresh start. A new beginning, a new opportunity to prove myself to just a different set of eyes,” said Williams, who was left off the World Cup team but had three goals and five assists in four games in the Olympic qualifying tournament. “It definitely gives me a bit of confidence, knowing that he has belief in me.”

The U.S., which outshot Canada 19-4, didn’t get on the scoreboard until the 60th minute when Williams stepped between defenders Jayde Riviere and Sophie Schmidt to intercept a pass on the edge of the penalty area before sending a right-footed blast under the crossbar and into the side netting inside at the far post.

Williams set up the second goal 11 minutes later, ducking under a long Sam Mewis cross from the left wing and heading it to Lindsey Horan, whose left-footed shot brushed the right post before going in for her sixth goal of the tournament.

Megan Rapinoe, who came off the bench just after the hour mark, put the game away in the 87th minute, running on to a low feed by Williams and redirecting it into the goal with her first touch.

Andonovski has brought others changes too. Where Ellis could be quiet and intense, Andonovski is excitable and emotional, enthusiasm that has proved contagious.

“I’ve loved playing for him and I love the new energy that he’s brought,” midfielder Julie Ertz said. “But also the accountability. He treats us like absolute professionals and wants us to continue to get better and kind of push the limits.”

Rapinoe, the reigning world player of the year, agreed: “His best attribute is getting the very best out of each individual. Really bringing everyone’s game to the next level.”