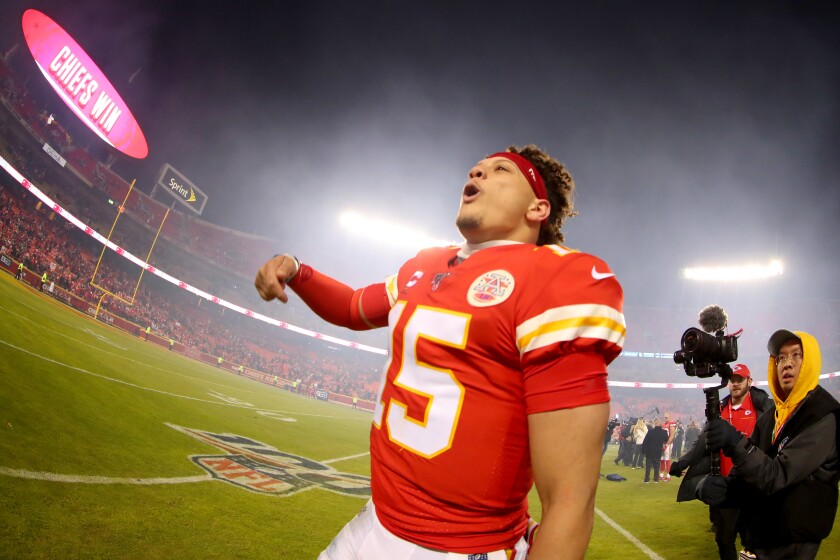 In the NFL, that means four of the league’s most intriguing quarterbacks — Kansas City’s Patrick Mahomes, Tennessee’s Ryan Tannehill, San Francisco’s Jimmy Garoppolo, and Green Bay’s Aaron Rodgers — along with a truckload of sure-handed receivers are one victory away from Super Bowl LIV.

It also means that in the AFC, a curveball is coming.

In 15 of the last 16 Super Bowls, teams from that conference have been represented by one of three quarterbacks: Tom Brady, Peyton Manning or Ben Roethlisberger. The lone exception came in the 2012 season when Joe Flacco helped lead Baltimore to a championship.

This season, we’re guaranteed to get either Mahomes or Tannehill in the AFC, and in the NFC, either Brady’s old backup with the Patriots or Rodgers, the only remaining quarterback with Super Bowl playing experience. He led the Packers to a title in early 2011, with Green Bay becoming the most recent six seed to win it all.

The clock is ticking loudest for Rodgers, 36, who is 1-2 in conference championship games and understands these opportunities don’t come too often.

“I do appreciate that,” he told reporters this week. “There’s a feeling, I think, when you’re younger and there’s some older guys on the squad who are on the back half of their career and wanting to get that ring for them.

“It was important to get that for those guys because just how much I knew it meant to them late in their career.”

A look at the challenges each of the four quarterbacks present and face:

• Mahomes is scorching. He made both Chiefs and NFL history in last Sunday’s back-from-the-dead divisional victory over Houston, joining Washington’s Doug Williams and the only players to throw four touchdown passes in one quarter of a postseason game. Mahomes threw for 321 yards and five touchdowns in leading Kansas City to consecutive AFC championships for the first time.

The Chiefs are flush with talented pass catchers, from blistering fast wideouts Tyreek Hill and Mecole Hardman, to the versatile Sammy Watkins and Damien Williams, to the devastating Travis Kelce, who’s neck and neck with San Francisco’s George Kittle as the NFL’s most dangerous tight end.

Bottom line, even top-notch defenses can’t stop everyone. Someone is going to be open on virtually every snap. The only reliable way to beat the Chiefs is if they help you by making mistakes.

Watch for Tennessee to try to play keep-away from Mahomes by leaning on running back Derrick Henry, who has run for 561 yards in his first four postseason games — the most of anyone in the Super Bowl era over his first four games. Keep pounding the ball and controlling the clock.

Also, the Titans know they need to score touchdowns (as opposed to kicking field goals) to keep up with the Chiefs, so they’re likely to be in four-down territory a lot.

• Tannehill has reinvented himself in Tennessee. He had three touchdowns (two passing, one rushing) in an upset of Baltimore last week, and finished the regular season with an NFL-best rating of 117.5.

The key is Henry, a freight-train runner who is the league’s first player to run for at least 180 yards in three consecutive games, dating to the regular season.

The Titans frequently line up in 12-personnel, which is two tight ends and two wide receivers, with Henry in the backfield. Defenses are compelled to bring an eighth man in the box to stop the run, and sacrificing with a single-high safety on the back end. That creates opportunities for one-on-one coverage of Tennessee receivers Corey Davis and/or A.J. Brown, and Tannehill can take advantage of that.

Tannehill has thrown a total of 129 passes for 160 yards in two postseason games, which might sound modest, but he has the luxury of picking his spots because of Henry.

Despite losing two of their final three regular-season games, the Titans have been giant slayers in the playoffs, knocking off New England and Baltimore.

“Like I said at the end of camp, `'Why not us?’ ” Henry told reporters. “We’re going to keep that same mentality.”

• There were a lot of questions at the beginning of the season surrounding how effective Garoppolo would be, and not just because he was coming off a torn anterior cruciate ligament. He keeps passing every test. He threw for 3,978 yards this season, the most by a 49ers quarterback since Jeff Garcia in 2000.

His 102.0 rating this season put him in rarefied air; he joined Hall of Famers Joe Montana and Steve Young as the only 49ers quarterbacks to finish at 100.0 or better.

The 49ers are 4-20 without Garoppolo and 20-5 with him. Still, he hasn’t proven — or hasn’t needed to prove — he’s the kind of quarterback who can take control of a game and win it himself. San Francisco leads with its defense, and has an outstanding running game to boot.

Lost in San Francisco’s 37-8 blowout of the Packers in November — and disguised by Garoppolo’s lofty 145.8 rating — was that the 49ers quarterback didn’t have an overwhelmingly great game. He started five of six (with a fumble and a sack), then completed nine of 14 the rest of the way. There’s more to prove, and the Packers want to put the game on his shoulders.

• For Rodgers, first down will be especially pivotal. He was hammered by San Francisco’s defensive front when the team last played, sacked five times, hurried six more, and twice hit hard after just getting the ball out. The Packers need to be in manageable situations in the middle downs, because second- and third-and-long will leave the quarterback exposed.

Watch for Rodgers to get the ball out of his hand quickly, especially on first down, and for him to rely on a receiver other than Davante Adams, who will be blanketed. Maybe it’s tight end Jimmy Graham who steps up, although the 49ers will try to jam him at the line of scrimmage, a receiver such as Geronimo Allison or running back Aaron Jones coming out of the backfield.