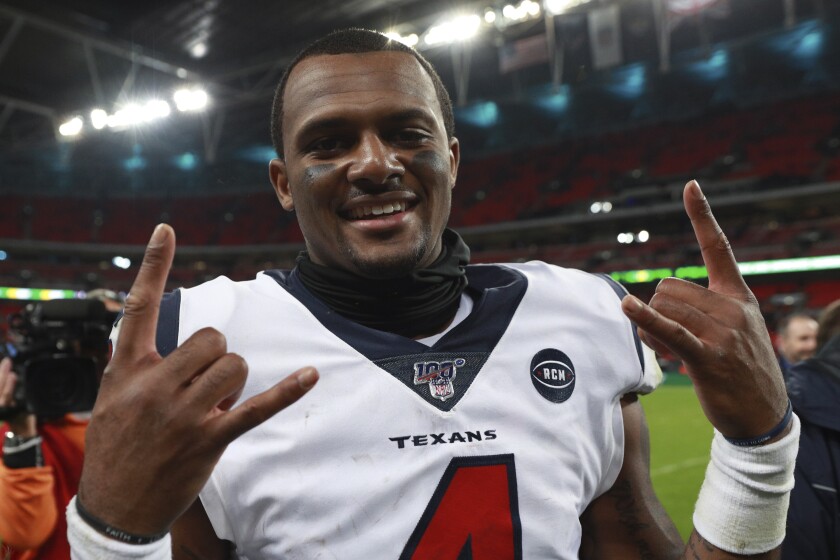 Houston Texans quarterback Deshaun Watson was kicked in the eye last week against the Oakland Raiders, and it still looks pretty nasty, bloodshot and swollen. Despite that, he completed 22 of 28 passes for 201 yards and two touchdowns in a 26-3 win over the Jacksonville Jaguars on Sunday in London.

And what does he credit for Sunday’s success?

“It was the Popeyes spicy chicken sandwiches I ate this week that helped the eye,” he said after the game.

Popeyes’ chicken sandwiches became so popular over the summer that the fast-food restaurant chain couldn’t keep up with demand. Popeyes announced that the sandwich would be “back for good” starting Sunday, which was coincidentally National Sandwich Day.

So how did Watson get his hands on the sandwich before everyone else? He’s not talking, but here’s guessing we will be seeing a lot of “Deshaun Watson for Popeyes” commercials in the future.

And there’s a whole Popeye swollen-eye joke available that I’m just not going to touch.

Former NFL star Randy Moss had to be in Bristol, Conn., on Sunday morning so he could fulfill his role as an analyst on “Sunday NFL Countdown.” On Saturday night, his son Montigo was playing the final game of his high school career for the Fork Union Military Academy in Virginia. No problem. Just charter a flight after the game and arrive in Bristol in plenty of time. And that’s just what Moss did. Except for the “arrive in Bristol in plenty of time” part.

You see, he told his pilot he needed to be in Bristol. But he left out the “Connecticut” part. His pilot took him to Bristol, Tenn.

“Sunday NFL Countdown” host Sam Ponder asked Moss about it at the start of the show.

“I want to give a shout-out to the people of Bristol, Tenn.!” Moss said. “I had to come up here, I had an 8 o’clock meeting, and the pilot tells me, ‘We have about an hour-and-five, hour-and-10-minute flight.’ Cool. I laid back, put my hat over my eyes, lay the visor down. Once we land, I’m looking for the Sheraton, the hotel that connects at Bradley [International Airport in Connecticut].

The pilot got the plane back in the air as fast as possible, and Moss arrived in time. To make matters worse, Fork Union lost 48-22, although Montigo Moss had 10 catches for 101 yards and a touchdown.

What is your all-time favorite local sports moment? Email me at [email protected] and tell me what it is and why, and it could appear in a future daily sports newsletter or Morning Briefing.

This moment comes from Phil DeSanctis of Mount Washington:

“It has been 45 years since [I and] my wife and two daughters visited my mom and dad in my hometown of Greensburg, Pa., which is 30 miles east of Pittsburgh, home of the Pirates. We had been there two days when my dad said the Dodgers were in town and asked if we’d like to see the game. The next day, we bought tickets two rows from the playing field on the third base side. We arrived early to see batting practice.

“While we were enjoying our hot dogs, the gate opened to the steps leading to the broadcast booth. Vin Scully came walking through the gate with his earphones around his neck on his way to the broadcast booth. As he walked by, I yelled, ‘Vinnie, I’m from L.A.!” He looked up and came over to say hello! He sat down in between my dad and I and talked to us for about a half-hour. We talked about the Dodgers, and he asked us how long we were Dodger fans. My dad told him he was a longtime fan. My dad also told him his nickname was “Cookie,” named after Cookie Lavagetto.

“My dad was so happy he couldn’t wait to tell all his friends that he met and talked to Vin Scully!”