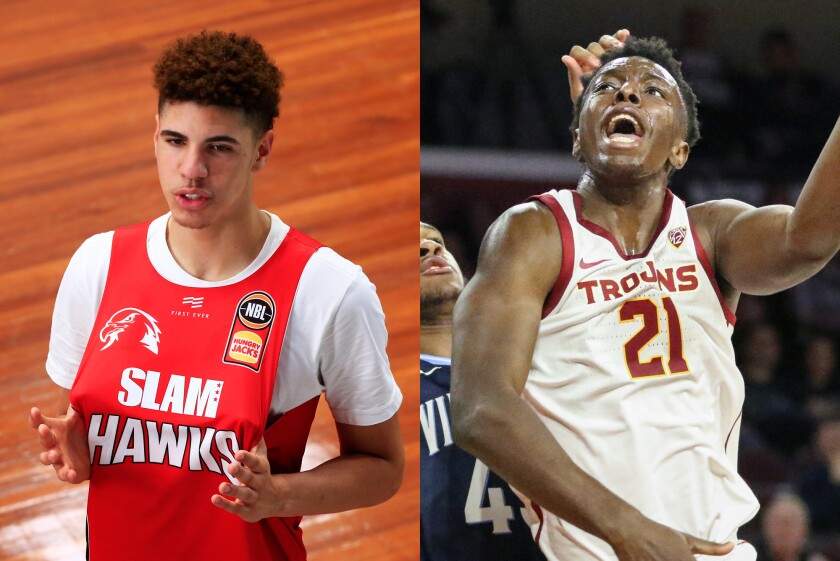 What the crystal ball shows for high school sports in 2020

It’s time to peer into my crystal ball to see what 2020 has in store for the Southland’s high school athletes (and a few former ones), coaches and fans:

Former Chino Hills standouts LaMelo Ball and Onyeka Okongwu will be reunited on the stage during the NBA draft as first-round picks, offering each other hugs while reminiscing about going 35-0 as freshman starters on the Huskies’ 2016 state championship team.

Pete Crow-Armstrong of Studio City Harvard-Westlake will hit for the cycle, become a first-round draft pick and receive congratulations from Lucas Giolito, Jack Flaherty and Max Fried, all of whom want to be nice to their fellow alumnus who they one day will have to get out in the major leagues.

It’s going to be a memorable 2020 for Harvard-Westlake center fielder Pete Crow-Armstrong. pic.twitter.com/yw19lJCY2e

Lakewood Mayfair guard Joshua Christopher will jump so high on a dunk that he’ll lose one shoe, resulting in a viral video on YouTube.

There will be so many football players transferring from Harbor City Narbonne that it will make the mass exodus from Hawkins in 2017 look like a trickle.

The basketball game on Jan. 23 at Cal State Northridge between Chatsworth Sierra Canyon and Los Angeles Windward will be the hottest ticket in town and cause LeBron James to rush after his Lakers’ game in Brooklyn to watch from the locker room on his iPad.

Clark Slajchert of Oak Park will break the 50-point barrier in a basketball game.

Freshman softball player Ella Parker of Sherman Oaks Notre Dame will hit so many home runs that her uncle, Dodgers manager Dave Roberts, will ask if she can offer any tips to Cody Bellinger.

The debate will heat up in the bleachers and on Twitter over who’s the best sophomore basketball player in the Southland among Amari Bailey and Shay Odom of Sierra Canyon, Skyy Clark of Northridge Heritage Christian, Koat Keat of Altadena Renaissance, Kijani Wright and Dylan Andrews of Windward, Ramel Lloyd of Woodland Hills Taft and Benny Gealer of Rolling Hills Prep.

The two best freshmen baseball players will be from the Mission League — Kai Caranto of Harvard-Westlake and Ian Duarte of West Hills Chaminade.

Grace Luderer of Woodland Hills Louisville will throw a no-hitter in softball, then get a hug and kiss from her grandpa, Vin Scully.

Sebastian Cueva is the hero on the mound. 2 2/3 shutout innings. Birmingham wins its third consecutive City title 9-5 over Palisades. pic.twitter.com/Y0KBiojH3W

The game of the year in high school baseball will happen when La Mirada and pitcher Jared Jones face Notre Dame and pitcher Lucas Gordon in the playoffs, with the two future Texas Longhorns each promising to reveal the hook ‘em Texas symbol win or lose.

Former Corona Centennial quarterback Tanner McKee will return from his two-year Mormon mission in Brazil, enroll at Stanford and show his arm is in better shape than people thought while offering new insight into the world of soccer.

The 2020 player of the year in high school football will be a defensive player — end Korey Foremen of Corona Centennial.

Etiwanda will stun the basketball world by winning the state championship.