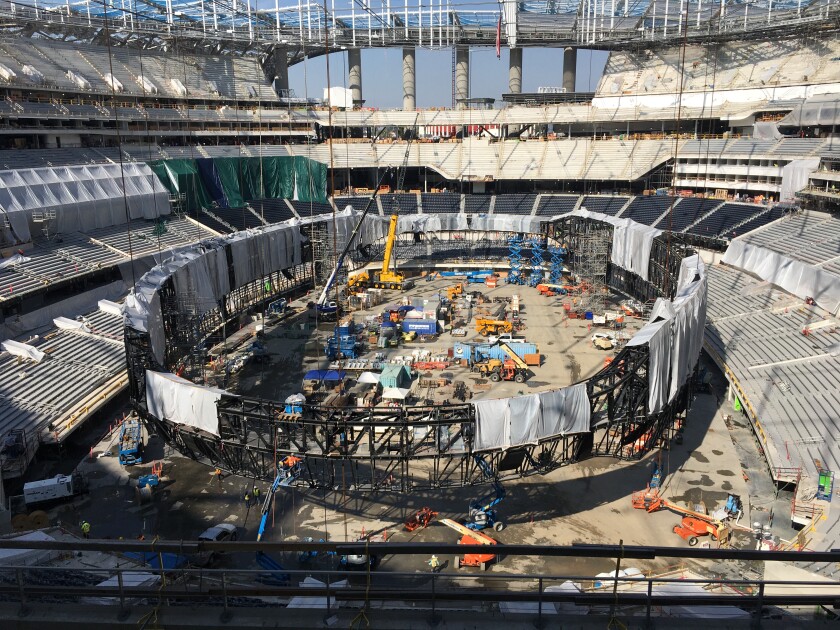 Who? When? Where? 2020 NFL season will start with plenty of questions

No, seriously. Where should the season start?

That’s one of the questions Commissioner Roger Goodell will be deciding this offseason, with new stadiums opening in Los Angeles and Las Vegas, and the Kansas City Chiefs fresh off their first Super Bowl victory in 50 years.

The league broke with tradition in the season that just ended with Green Bay playing at Chicago in the Thursday night opener, a slot otherwise reserved for the defending Super Bowl champion. That champion, the New England Patriots, made their season debut in the Sunday night slot.

So one of the questions this year is how to cut the ribbon on SoFi Stadium, the biggest and most expensive (by far) venue in league history. Although it will be home to the Rams and Chargers, presumably the Rams will get the first game there, seeing as owner Stan Kroenke is the driving force and financial engine behind the Inglewood stadium.

Then, there are the Raiders, who are opening Allegiant Stadium in Las Vegas. The NFL wants a splashy debut there too, and is staging the 2020 draft in that city. Fortunately, there are a lot of marquee TV windows: Thursday, the Sunday afternoon national game, Sunday night, and a Monday night doubleheader in Week 1.

How to showcase those two sports palaces is but one of the many questions the league is facing as it begins its second century with its 101st season. A look at some of the other topics that will move to the front burner in the coming months:

Tom Brady, perhaps the greatest quarterback in history, is due to become a free agent in March. Will he stay in New England, take his talents to South Beach, or opt for the West Coast? There are a lot of potential landing spots, each with distinct pros and cons, for a player who turns 43 on Aug. 3.

The Miami Dolphins need a quarterback, but they have spent the last year dumping some of their best players. Does Brady really want to stay in the AFC East and go to a club in the middle of a serious rebuild?

Indianapolis is a possibility, and it would be fascinating to see him on the other side of that Patriots-Colts rivalry. That could be a good place for Philip Rivers too, as a lot of signs point to the Chargers parting ways with their longtime quarterback, including the fact Rivers already has moved his family from San Diego to Florida.

The Raiders could make a run at Brady, and so could the Chargers, who badly need to drum up fan interest as they move into a new stadium that’s three times the size of their temporary home in Carson.

The league is going to reevaluate how it provides opportunities for minority coaching candidates. Five teams have changed coaches since the end of the regular season and only one hired a minority candidate, with Ron Rivera going to the Washington Redskins. Of the eight coaching changes the previous season, only one job went to a minority candidate as Brian Flores wound up with the Miami Dolphins.

Goodell said the league needs to take a look at how it implements the Rooney Rule, which requires teams to interview at least one minority candidate before making a hire.

“It’s clear we need to change and do something different,” the commissioner said. “There’s no reason to expect that we’re going to have a different outcome next year without those kinds of changes.”

A series of meetings are scheduled for this month to study solutions, not just to inspire more diversity in the head-coaching ranks, but also among coordinators and in front offices.

The NFL and its players are working toward a new collective bargaining agreement, with the current pact due to expire next year. One of the potential sticking points is expanding the regular season from 16 to 17 games.

In the coming weeks, player representatives reportedly will meet to discuss where they’re willing to make concessions to get what they want from owners. One of the areas where they might budge is in playing more games, which presumably would involve expanding the roster beyond the current 53 players.

This wasn’t a great season for officials, at least in terms of perception. The league has to decide whether it’s going to extend the one-year experiment of making pass interference reviewable. If it wants to continue down that road, the NFL needs to tweak the current process. Teams and fans were frustrated and confused.

“The act in itself had to be more egregious in replay to change the initial decision that was made on the field. In order for this rule to be successful, the standard has to be the same on the field as in replay.”