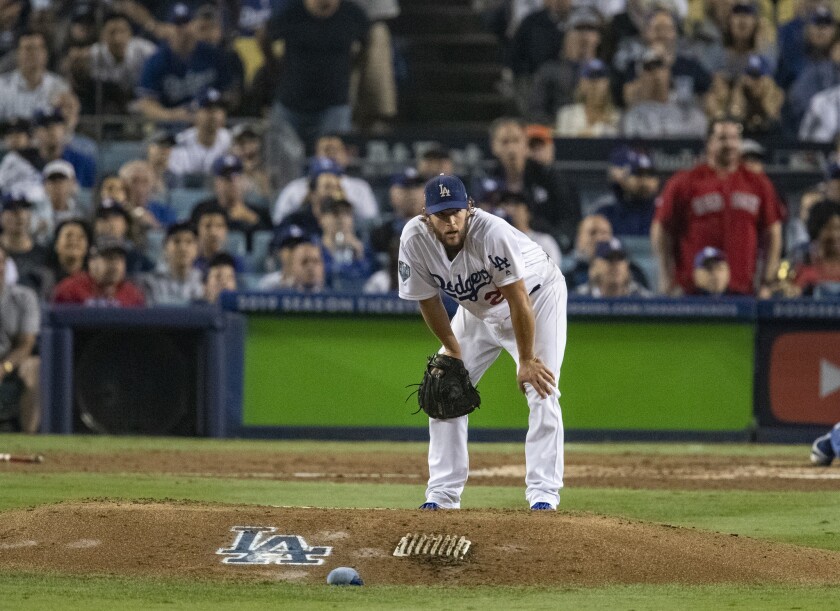 Who knew? Maybe sign-stealing is a common practice in the majors

The tools were available. Of course someone used them to cheat.

Two months after the Athletic detailed how the Houston Astros used electronic devices to steal signs in 2017, the online publication reported Tuesday that Boston Red Sox players used monitors in their video replay room to decipher opponents’ signs the next season.

The Dodgers were defeated in the World Series by the Astros in 2017 and by the Red Sox in 2018.

So maybe Clayton Kershaw, Yu Darvish and the team’s other pitchers didn’t choke in the franchise’s most important games over the last 30 years. Or maybe they did.

That’s the only real takeaway from this mess, how those of us on the periphery of the sport can only guess at what’s actually unfolding on the field before our eyes.

The dark secrets of the baseball trade that are public knowledge become so almost by accident.

The late Ken Caminiti confessed to Sports Illustrated that he used steroids, pushing Major League Baseball to acknowledge the game had a problem with performance-enhancing drugs. Years later, a disgruntled former employee of a strip-mall steroid distributor released documents that showed performance-enhancing drugs remained a part of the game after testing was implemented.

And, in the case of this sign-stealing scandal, former Astros pitcher Mike Fiers decided to speak on the record with the Athletic. He and three unnamed members of the 2017 Astros said signs stolen with the help of a camera placed in center field were relayed directly to hitters in real time.

The disclosures prompted an investigation into the Astros by MLB. In the wake of the Athletic’s most recent report, the commissioner’s office has also started looking into the Red Sox.

Neither inquiry is likely to uncover the extent to which they cheated or how prevalent the practice is around the majors. The public will see part of the picture and have to use its imagination to fill in the gaps.

The Red Sox’s alleged crimes in 2018 are said to be less egregious because they required a player to be on base. Sign systems that were figured out in the video replay room were shared with the other players on the team. Players on base used that information to steal catchers’ signs and signal to their teammates at the plate what type of pitch was about to be delivered.

The system theoretically wasn’t usable in the playoffs, when MLB placed an in-person monitor in replay rooms.

In the World Series against the Dodgers, the Red Sox batted .353 with runners in scoring position. They scored 17 of their 28 runs with two outs.

Maybe the Red Sox hitters got hot. Or maybe they received some help.

It is known that the Red Sox resorted to such tactics after being warned explicitly not to by the commissioner’s office. When the organization was fined in 2017 for using an Apple Watch to communicate stolen signs from the replay room to the dugout, it assured MLB that it wouldn’t commit similar violations in the future.

The conclusions that can be drawn are that the Red Sox were either unusually bold or that they felt they had to continue cheating to remain competitive in baseball’s current environment.

If the latter were the case, maybe the Red Sox’s paranoia was based on something substantive. Or maybe not.

Whispers about electronically aided sign-stealing have swirled around the game for a couple of years. This is an era in which front offices appear to believe they can affect the outcomes of individual games. The Astros and Red Sox might not be the only guilty parties.

Some unnamed members of the Milwaukee Brewers told the Athletic during the 2018 National League Championship Series that they were concerned the Dodgers were using video to steal their signs. Members of the New York Mets said in May that they suspected Dodgers hitters knew what was coming in their four-game series they played in Los Angeles.

Dodgers manager Dave Roberts has remained steadfast in his insistence that his team has played by the rules.

But this is a reality of cheating. Any time someone is caught, everyone in the industry is viewed with suspicion, even in the absence of evidence.

What happened because of steroids is happening again because of sign-stealing. History is being revisited. Judgments on players and teams are being reconsidered. The legitimacy of championships is being questioned.

The world has become a little more cynical, and what used to be a simple escapist activity feels more complicated.