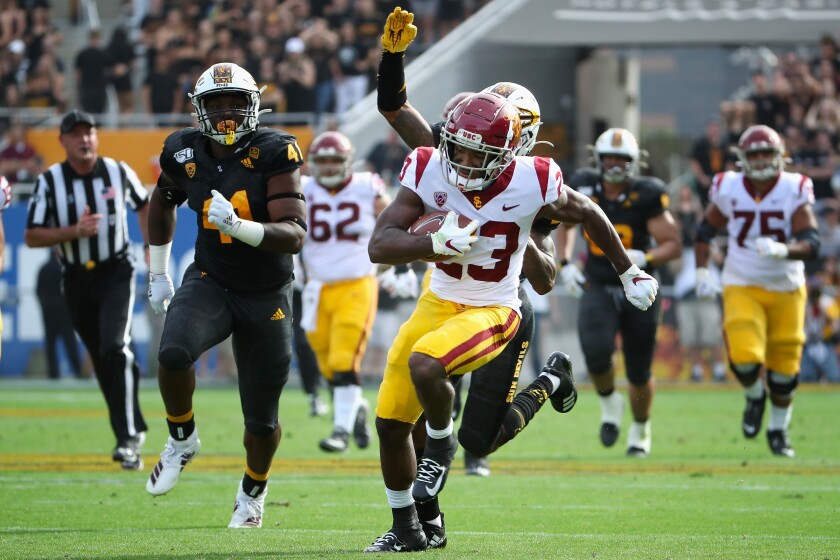 Weeks ago, before most of its backfield had succumbed to injury, USC had every intention of sitting Kenan Christon for the entirety of his first season.

The freshman speedster actually welcomed the idea at first. He’d planned to redshirt all along, in order to retain an extra year of eligibility. But now, with Christon excelling in relief of USC’s trio of injured backs, an obvious decision has suddenly gotten a whole lot more difficult ... and more pressing.

With four games under his belt, Christon would have to sit the rest of the season in order to retain his ability to redshirt, meaning a decision will need to be made this week.

Asked whether he preferred one route or the other, Christon said it was “all up to the coaches”.

Coach Clay Helton said he would discuss the decision with Christon this week. With two backs set to return soon, he didn’t commit one way or the other. But with USC technically still in the hunt for the Pac-12 South, Helton said he’d “do what’s best for the team first.”

Before USC escaped with a 31-26 victory on Saturday, it seemed Christon’s time as the Trojans’ only option on the ground was coming to an end. Injured backs Stephen Carr and Vavae Malepeai both dressed and warmed up before the game, but neither wound up playing, leaving Christon again as the last man standing.

And again, the diminutive back stood tall, piling up 144 all-purpose yards and two touchdowns. After coaches suggested that Christon’s workload wouldn’t increase, he finished with a season-high 24 touches — two touches fewer than the largest workload for a USC back in a single game this season.

That wasn’t entirely by choice, with USC in desperate need of a run game to extend drives. Up against the Pac-12’s third-best run defense, Christon averaged just 3.1 yards per carry, his lowest of the season.

But with the ground game running on fumes, Christon did most of his damage through the air. Midway through the first quarter, he took a pass from Kedon Slovis in the flat and scampered eight yards for a score. A few minutes later, he got behind the defense on a broken play, made a catch, broke some tackles and took it 58 yards to the end zone.

With 318 rushing yards this season, Christon currently trails only Malepeai in total rushing yards, despite playing in two fewer games.

Carr (hamstring) and Malepeai (knee) could both return next week against California, leaving plans for Christon in question. But whether Saturday proves to be his last game or not this season, the freshman has certainly answered the call over the past four games.

A week after its kickoff cover team allowed a 100-yard return for a touchdown against Oregon, the Trojans nearly allowed another kickoff to go the distance.

Arizona State returner Brandon Aiyuk made it 97 yards before kicker Alex Stadthaus was able to bring him down. Three plays later, the Sun Devils scored their only points of the first quarter.

Nine of Arizona State’s 14 drives n Saturday started beyond their 30-yard-line. After the Sun Devils nearly broke another return, USC opted to go with its other kicking option, Michael Brown, who resolved to simply squibbing kickoffs.

As USC’s defense welcomed back both safety Talanoa Hufanga and defensive end Drake Jackson, it found itself without the services of two others. Defensive tackle Marlon Tuipulotu and linebacker Palaie Gaoteote IV both missed the game. Tuipulotu, whose injury was not believed to be serious earlier this week, did not make the trip.

Center Brett Neilon, who left on the same play as Slovis, has a calf strain that could sideline him.