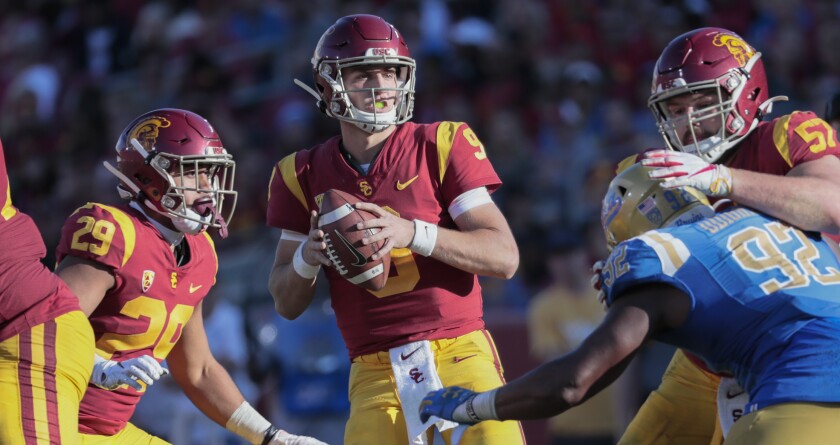 As the band played and the celebration ensued, as recent progress clashed with long-held assumption, Clay Helton, the Trojans embattled coach, slipped away, traversing the Coliseum turf for what may be the final time.

Behind him, the fight song that had been his soundtrack at USC for the better part of a decade roared on. As the song blared joyously, again and again, in the aftermath of a 52-35 rivalry rout of UCLA, his players climbed the ladder one by one, conducting the band with the customary sword, soaking it all in.

But Clay Helton kept walking toward the tunnel, until the man who would soon determine his fate called to him from a few yards away. “Enjoy this,” new athletic director Mike Bohn said as he caught up to his embattled coach. Helton put an arm around him and smiled, stopping only briefly, before continuing toward the tunnel.

There was plenty to enjoy Saturday for a coach who has faced a constant stream of doubt over the past two seasons.

The Trojans’ offense finished with a fireworks show, scoring more points and piling up more yards (643) than it had all season, led by a school-record 515 yards from freshman quarterback Kedon Slovis. The defense slammed the door on Joshua Kelley, holding the Bruins’ lead back to just 45 yards rushing, after he piled up 289 a season ago. And for the third time in four seasons, the Trojans finished with five wins over their final six games. And USC (8-4, 7-2 Pac-12) would still win the conference South Division if Utah lost either of its final two games, against Arizona and Colorado.

But was it enough? Once again, the question loomed over all Saturday, as two crosstown rivals met at a crossroads. Both teams took rocky roads to arrive here, battling inconsistency, fighting unforced errors, struggling to establish any sort of foothold for long. Both teams, for different reasons, were desperate for a statement Saturday, if only to point to some evidence of their programs’ progress.

For UCLA, there was no such overt concern about its coach’s future. Chip Kelly, who boasts more than twice as many losses in Los Angeles (16) as he had as Oregon’s coach (seven), would carry on without consequence.

The results were troubling, nonetheless. Saturday’s defeat not only saw the Bruins (4-7, 4-4) slip out of bowl contention, but also clinch a fourth consecutive losing season — the first time UCLA had fallen so far since before the Great Depression.

It didn’t start so disappointingly for UCLA on Saturday, as the Bruins scored on their opening possession, thanks to a USC penalty on a punt that kept the drive alive. It was as positive a start as UCLA could have expected. In its four victories, UCLA had scored on its opening drive.

But once Slovis got going, there was no slowing the Trojans and their freshman phenom by one of the Pac-12’s worst secondaries.

Even as UCLA quarterback Dorian Thompson-Robinson did his best to duel with his crosstown counterpart, passing for 367 yards and three touchdowns and adding 64 and a touchdown on the ground, it proved to be a futile effort.

At the end of an unexpectedly stellar freshman season, this sort of heroic performance from Slovis had become old hat. But here was the overlooked former three-star recruit’s development on full display. He hit Michael Pittman Jr. twice for touchdowns in the second quarter, then hit Drake London from 34 yards out just after halftime. A blow to the head midway through the third quarter saw Slovis briefly sidelined, but he returned to lead two more touchdown drives, capping the first with a soaring 49-yard score to Tyler Vaughns.

It was the fourth time in five weeks that Slovis passed for at least 400 yards and four touchdowns. This time, he’d gotten just about everyone involved, as four Trojan wideouts had more than 100 yards receiving for the first time in school history.

Those receivers could only shake their head at how far Slovis has come this season.

“I didn’t see this coming,” said Pittman, who caught 13 passes from Slovis. “I didn’t see him becoming the new superstar quarterback of college football.”

As a decision looms on college football’s hottest coaching seat, there’s perhaps no better symbol of the program’s progress than Slovis, who boasted just one other Pac-12 offer when Helton’s staff took a chance on him.

“When your opportunity comes, you have to make the most of it,” Slovis said. And there was no doubt that he’d done that in a season when USC needed it most.

But what that progress might mean for Helton, whose exit had seemed a foregone conclusion, remains to be seen.

Might it actually be enough, even as frustrated fans prepare the pitchforks and torches for that possibility? The issues of his tenure go undeniably deeper than the surface-level success of the past six weeks. Recruiting remains an issue. A frustrated fan base continues to call for his ouster, leaving open swaths of seats across a newly renovated Coliseum.

Asked why USC started so slowly this season, before turning it around late, Helton blamed “a perfect storm” of injuries and youth. But was that a worthy enough excuse?

“One of the things I think will make this team incredibly strong for the future is the way they handled that and their belief now in what we’re doing,” Helton said. “You bring in a new offensive system, one that I think fits our personnel, and how electric is it? How fun is it?”

The fun Saturday, however, would last for only so long. Soon, the questions would come again, and the speculation would continue to ensue.

As Helton walked off the field and into the Coliseum tunnel for what might be the final time, he pulled off his cap. He flashed a “Fight On” to fans screaming in his direction, and did what he always said he would, whenever asked about his job the past two seasons.

He ignored the noise around him and headed up the tunnel, soaking in what was left of those final precious moments.

“USC is an extremely special place and always will be,” he said later. “It doesn’t matter if I’m the coach or you’re the coach, USC is always going to be special. Always.”