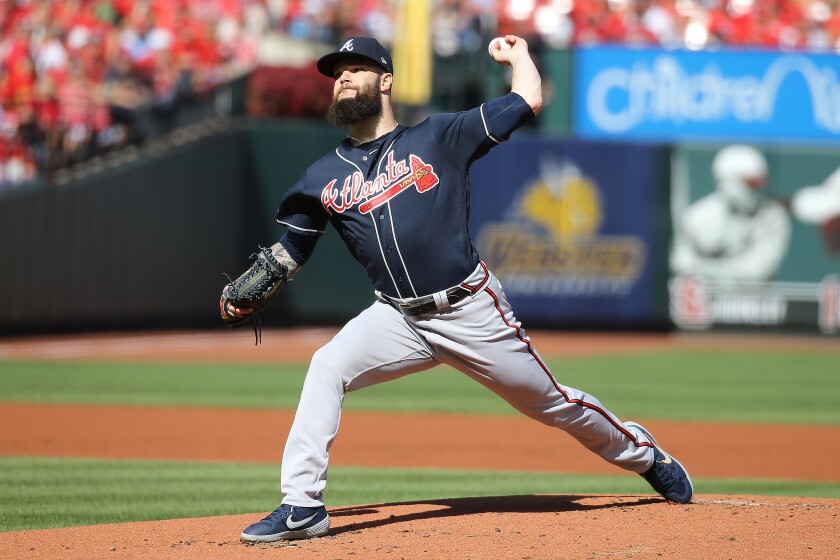 With Dallas Keuchel off the market, Angels still have not added a front-line starter

When he sat in front of reporters in a San Diego hotel this month, Angels manager Joe Maddon praised his new team’s owner and its top baseball operations executive. Arte Moreno, the billionaire who purchased the team in 2003, had committed to adding resources for a team in need of a shock to its system. Billy Eppler, the general manager, had constructed what Maddon called a “good strategy” for the Angels’ offseason.

Nearly two weeks later, all the Angels have to show for the “all-in” approach Maddon described is slugging, Gold Glove-caliber third baseman Anthony Rendon and a full rotation that is still missing a proven ace starter.

And on Saturday, another option who could have helped shore up their maligned pitching staff went off the market when former Cy Young Award winner Dallas Keuchel reached terms with the Chicago White Sox on a contract that guarantees him $55.5 million over three years, said people familiar with the proceedings. Keuchel became the fourth front-line pitcher on the free market whom the Angels did not obtain.

The Angels do not appear to be panicked. News of the deal emerged not an hour after Eppler addressed his team’s addition of durable right-hander Julio Teherán. In a conference call, Eppler said he remained open to augmenting the rotation.

“If something shakes loose and the fit is right, we won’t hesitate to make another acquisition,” Eppler said.

The Angels have some financial flexibility. Based on the luxury tax threshold of $208 million, they have roughly $25 million remaining in the budget to address a need highlighted as their top priority after a 90-loss season in which no starter took 20 turns and only one pitcher eclipsed the 100-innings mark (Trevor Cahill, 102 1/3). The Angels could dedicate those leftovers to wooing free agent Hyun Jin-Ryu, an All-Star for the Dodgers this past season who is likely to command a yearly salary of about $20 million.

But they might continue to look elsewhere. Two-way player Shohei Ohtani’s pitching workload will be limited next season as he works his way back from Tommy John surgery, so Eppler has been focused on making sure he has enough durable pitchers in the rotation. Between the Teherán deal and the earlier trade for right-hander Dylan Bundy, Eppler has added two pitchers who have each made at least 28 starts per season since 2016. They will stabilize a staff that has been perpetually ravaged by injuries.

If he does not find a so-called “No. 1” starter, Eppler appears be content to arrive at spring training with the staff he has thus far assembled. The rotation figures to include some combination of Ohtani, Andrew Heaney, Griffin Canning, Teherán and Bundy. Left-handers Patrick Sandoval, José Suarez and Dillon Peters and right-hander Jaime Barria are likely to compete for another spot in the rotation if the Angels decide to go with a six-man crew, as they did when Ohtani debuted in 2018.

“I think we’ve seen some of the pitchers on our roster pitch at a pretty high level,” Eppler said. “So I’m not going to undercut them and say they don’t have the ability to pitch at the front end of a rotation. We’ve seen clearly what Shohei can do. We’ve seen Andrew Heaney have periods and seasons of really low ERA. We watched Griffin Canning come up and make an impact right away.

“I believe this is a strong group.”

Eppler said the Angels are “making progress” in finding a starting catcher. That pursuit could limit what they can do to add a pitcher. … The team has invited Anaheim native Jose Rojas to his first major league camp. He will join fellow minor leaguers Jo Adell, Brandon Marsh and Jahmai Jones in the Angels’ clubhouse at Tempe Diablo Stadium.