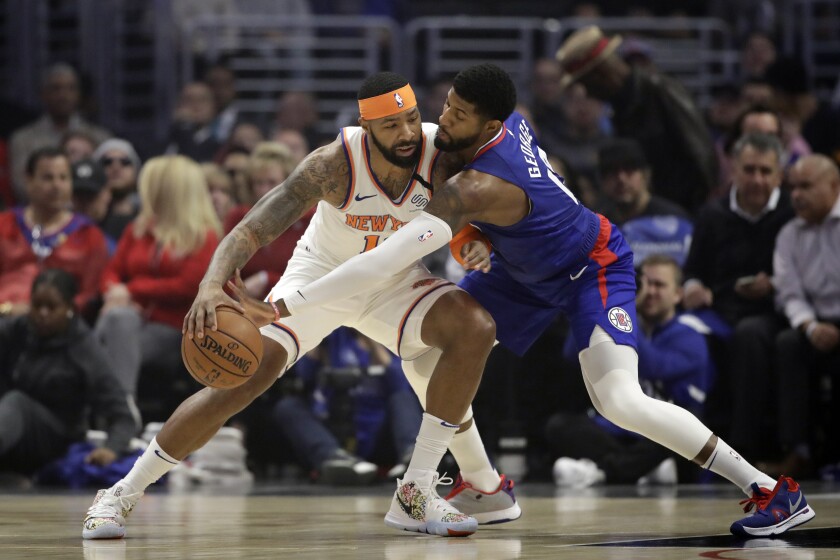 With defenses down, Clippers get a lengthy break when they need it the most

When the NBA schedule was released in August, some Clippers immediately zeroed in on January.

Amid the grind of a long season, a four-day break between games was practically an oasis.

What they couldn’t have known was the time off would land precisely when their defense needed a break the most.

After allowing 272 points combined to Memphis and New York amid a weekend split, the Clippers called their current play unsustainable and the break badly needed ahead of their next game, Friday at home against Golden State.

“I’ll never complain about a win,” coach Doc Rivers said, following Sunday’s 135-132 victory against New York at Staples Center. “But you also look at the long picture instead of just the now, and you know you can’t win that way a lot.

“You can win a game with bad offense and great defense. You’re not gonna win a lot of games with bad defense.”

The Clippers did not practice Monday and will not Tuesday, either, with workouts scheduled to return Wednesday and Thursday. They left Sunday’s game hoping the break would refresh a team that Rivers said hadn’t played consistently since a victory over the Lakers on Christmas Day.

“It’s a great week for us, great opportunity to maximize that practice, and I mean coach is right,” forward Paul George said. “We haven’t played the best, and I don’t think he’s saying from an offensive standpoint but just an overall standpoint we haven’t played well overall since that Lakers game.

“That Lakers game we were locked in. We might not have shot the ball well or had good moments in possessions, but [not] at any point in that game we felt we were going to lose. That’s just how we’ve got to go out every game. It’s, no way we should lose — we need to have that mentality, and I think that’s what’s going to be the biggest thing from this group.”

The Clippers fell from fourth in opponent field-goal percentage and ninth in opponent three-point percentage to seventh and 11th in those respective categories following their weekend back-to-back. The circumstances surrounding the performances continued a theme of their season: The Clippers were not fully healthy.

Guard Patrick Beverley and forward Paul George still were recovering from injuries when the Clippers played the Grizzlies on Saturday but faced the Knicks. As they returned, Kawhi Leonard sat Sunday because of injury maintenance on his left knee.

The Clippers entered the season with expectations of being one of the league’s best defenses. At full strength, there have been glimpses of such potential. The lineup of Leonard, George, Beverley, center Montrezl Harrell and guard Lou Williams — perhaps the likeliest to close games with the team at full strength — has limited opponents to 81.2 points per 100 possessions, nearly 25 points better than the team’s season average.

The catch? That lineup has played together only 46 minutes.

Yet players also stopped short of pinning their weekend’s matador defense on the absences. Memphis (20th) and New York (27th) each entered the weekend ranked among the NBA’s bottom third in offensive rating, only to shoot a combined 53.8%. After allowing 140 points to the Grizzlies, the Clippers started a taller lineup, featuring four players 6-foot-7 or taller, and went away from zone defense almost entirely. Despite those adjustments, the Knicks still shot 57%.

“Have we ever won a game where the other team shot 57%?” Rivers asked.

The answer: Rarely. The Clippers are 1-9 in such scenarios since Rivers’ first season in L.A., with Sunday being the lone exception. Though it’s unlikely many more teams will hit that mark, the Clippers have run into trouble even when opponents exceed a lower standard. Their record is 8-9 this season when allowing opponents to shoot better than the Clippers’ season average of 43.9%.

The four-day break, Williams said, is necessary for “getting back to the basics of what we do best.”

“I think we wake up every day knowing exactly who the … we are,” Beverley said. “It is just for us to go out there and put it together collectively, as a unit. That takes time. But we will be better. And we have some time to practice and get better at the things we need to get better at, whether it is attention to detail defensively or attention to detail offensively.

“We are a work in progress. The healthier we are, I can give you a better detailed answer to what type of team we are. But I think we know exactly who we are.”

Barring a setback during their practices this week, the Clippers should have their full roster healthy and available for only their second game this season when they play Friday. That lineup instability — some of which has been self-inflicted, given the strategy to sit Leonard to limit the regular-season workload on his left knee — has been a factor in their inconsistency.

Asked whether he knew what he could count on from his team from game to game, Rivers said he did not, before adding that he felt he could count on them to be within striking distance, even if that wasn’t the case against the Grizzlies.

“I know we’re going to be in the game, no matter if we play good D or bad offense. I feel like every night we have a chance to win. That’s something, you know, that’s a comfort, but also I know that we have to do things better,” he said. “We need to get in the gym. We’re going to have that opportunity this week; we have four days off. That’s longer than the All-Star breaks that I used to have as a player, so we’re going to take advantage of a couple of those days.”