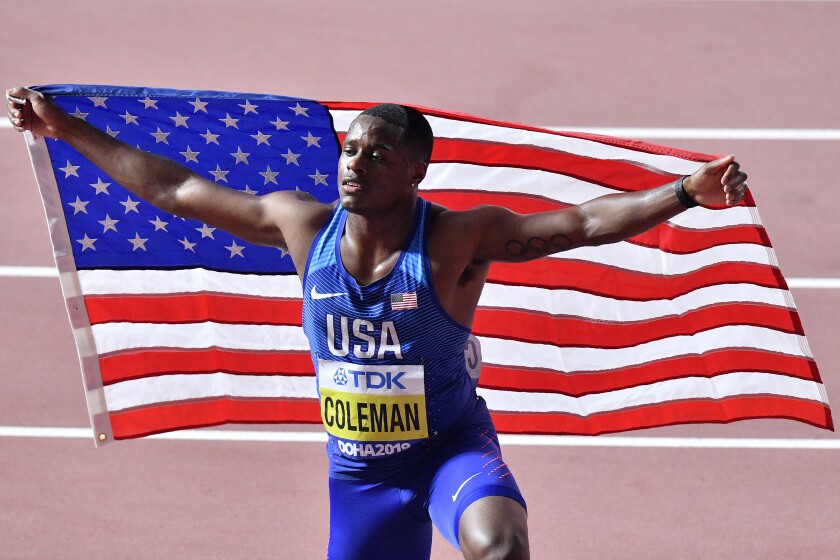 The world’s top sprinter has been temporarily suspended for missing a series of random doping tests and is now in danger of being held out of the Tokyo Olympics.

Christian Coleman, an American who won the 100-meter title at last year’s world championships, was penalized Wednesday for “whereabouts failures” because he was not at home when officials arrived to collect an out-of-competition sample last December.

In a social media post, Coleman asserted that officials had made “a purposeful attempt to get me to miss a test.”

“I have never and will never use performance-enhancing supplements or drugs,” Coleman wrote. “I am willing to take a drug test EVERY single day for the rest of my career for all I care to prove my innocence.”

As part of the random testing program, elite athletes must report their whereabouts for an hourlong window each day. They can be cited for a failure to comply if they do not submit a location in advance or are somewhere else in the event testers show up.

The U.S. Anti-Doping Agency had previously cited Coleman for missed tests but dropped that case because of a technicality.

In the latest instance, officials from the Athletics Integrity Unit — which oversees anti-doping efforts for the international track federation — visited Coleman’s home Dec. 9, 2019. Coleman says he was shopping at a nearby mall and could have rushed back if they had called.

Though USADA occasionally calls athletes, the AIU believes that such notification can hamper the effectiveness of random testing.

The AIU has similarly initiated whereabouts cases against female sprinters Deajah Stevens and Gabrielle Thomas, both of the U.S., and Salwa Eid Naser of Bahrain, the reigning women’s champion at 400 meters.

ESPYs to highlight social causes as well as sports awards

ESPYs to highlight social causes as well as sports awards

ESPYs hosts Russell Wilson, Megan Rapinoe and Sue Bird discuss how the award show’s focus will shift, including a recognition of the social unrest in the U.S.

Coleman has been appealing the citation for the Dec. 9 missed test and said that he tested clean when officials returned two days later. Still, he faces a hearing and a two-year ban if the provisional suspension is upheld.

The Tokyo Olympics, postponed because of the coronavirus crisis, is scheduled for July 2021.

“I’ve been tested multiple times since, even during quarantine,” Coleman wrote. “But of course that doesn’t matter, and the fact that I have never taken drugs doesn’t matter either.”

The sprinter added that the anti-doping system “must change … this isn’t justice for anybody.”